José M. Alonso and Rhys Andrews explore the extent to which housing stock transfer in local authorities across England has been shaped by local political ideology. They explain that ideology plays an important role in making housing reform happen, but that local people can also be a source of resistance and of alternatives to such reform.

The Grenfell Tower fire has put the spotlight on social housing in Britain and has provoked broader questions about the effects of privatization and liberalization of public services in the UK. Over the last decades, policymakers and politicians across Western countries have promoted a wide range of reforms to the public housing sector, with the aim of making the housing market more flexible and reducing the cost of social housing to the taxpayer.

Inevitably, these reforms were especially popular in Britain, where Margaret Thatcher’s 1980 Housing Act opened the door to implementing controversial housing policies such as the “Right-to-Buy”, followed by radical initiatives, such as the large-scale voluntary transfer of all publicly owned local housing stock to not-for-profit housing associations. The housing policy of the “new” Labour governments of the 2000s was marked by a continuation of the preceding Conservative policies; in addition to perpetuating the right-to-buy scheme, large-scale stock transfer was embraced as a means to cope with a large and deteriorating stock of public housing in urban areas across England.

Housing stock transfer has been a contentious policy since its implementation, often prompting accusations of privatization through the back door and concerns that it is motivated by ideological commitments rather than more pragmatic considerations. In academic terms, the “big” economic and ideological rationales behind housing stock transfer have been discussed at length, but we still need to know more about the local politics of this reform. 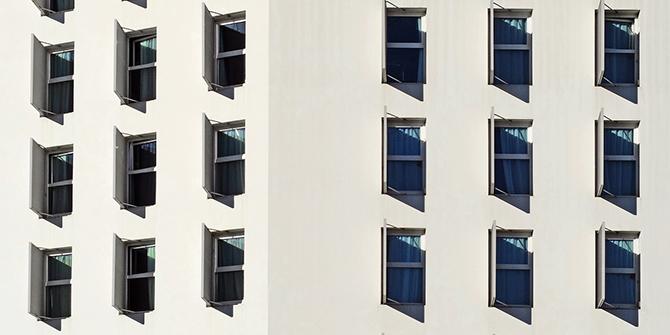 Our research looks at whether local political ideology and political preferences influence levels of public housing provision across councils in England. Our results suggest that local politics matters for social housing: Conservative councils are more likely to transfer housing stock away from the public sector, but local authorities with more Labour voters retain larger stocks of publicly-owned housing.

Although UK central government has utilised numerous levers to steer the social housing market, responsibility for the implementation of social housing policy still remains very much in the hands of local government. Levels of stock ownership and housing services expenditure vary considerably, and stock that has been transferred is managed by a mixture of private providers, housing associations, and local authority-owned Arms-Length Management Organizations.

Theories of political competition suggest that right-wing party rule and political preferences will be associated with the transfer of housing stock away from public ownership, while left-wing party rule and political preferences will be associated with higher levels of government-owned housing. We tested this theory by analysing the levels of housing stock held by English local authorities during the period 2001-14. In our analysis, we found striking evidence that Conservative-led authorities are more likely to transfer housing stock out of the public sector, but that Conservative political preferences among the local population don’t influence this decision. By contrast, voter support for the Labour party matters more for the scale of public housing provision than Labour party control of local authorities.

One likely explanation for our findings is that housing stock transfer reflects the Conservative Party’s “anti-municipalism” and a wider aim to stimulate private sector engagement in local public services through initiatives, such as Compulsory Competitive Tendering and the commercialisation of service provision. Council housing sales were, of course, considered unacceptable by Labour-controlled local authorities until 1997, but became more attractive when the ‘new’ Labour government started to promote social housing externalization policies.

Nonetheless, it is precisely from the late 1990s, when social movements in favour of municipal housing, such as the Defend Council Housing campaign, emerged across the UK; and it is the impact of these local political struggles, which likely explains our finding that as the proportion of Labour voters increases within a local authority so too does the stock of publicly owned dwellings. As such, our study highlights that whatever the national policy framework for housing, local politics continues to matter for the provision of social housing in cities and towns across England.

Overall, our research suggests that local political ideology plays an important role in making housing reform happen, but that local people can be the source of resistance, antipathy, and alternatives to such reform. Surprisingly, even though Conservative-led local authorities in England are more likely to have disposed of their housing stock, Labour-led councils are no more committed to publicly owned social housing than other authorities.

Nevertheless, while this finding may reflect a ‘New Labour effect’, our study offers a nuanced and valuable counterpoint to simplistic accounts of the connection between politics and policies. In particular, it underlines that citizens’ hostility towards local reforms may still influence the likelihood of their implementation. For local tenants and citizens concerned about the accountability gap posed by housing stock transfer that the Grenfell Tower tragedy has so starkly illustrated, our study indicates that resistance to de-municipalisation is possible.

Note: the above draws on the authors’ published work in the International Public Management Journal.

José M. Alonso is Assistant Professor of Economics at the University of Cantabria.