In learning lessons from COVID-19 and preceding governance pathologies, it is clear a new approach is needed based on a fundamental overhaul of how policy change is undertaken, writes Patrick Diamond. He discusses what Sir Michael Barber’s recent appointment to carry out an audit of government effectiveness tells us about the government’s attitude towards reform, and whether Barber can help resolve the governance problems enveloping the British state.

It was announced to some fanfare that the former Head of Tony Blair’s Delivery Unit, Sir Michael Barber, is returning to Whitehall to carry out an audit of government effectiveness. Barber’s remit is to do a rapid review of ‘the arrangements for driving and monitoring delivery both at the centre of government and in departments’. His appointment is intriguing. It is not at all clear why the Prime Minister has decided to embrace Barber’s ideas now. There were reports Tony Blair was in close contact with Ministers over COVID-19 strategy and vaccination planning, although speculation about his return to the corridors of power may prove premature. That said, Barber could act as surrogate for pragmatic ‘Blairite’ thinking in Whitehall. There is acute frustration in Johnson’s team given the perceived failings of the British state, its alleged bureaucracy, lack of agility, risk-aversion and slow pace of change. It was Blair who complained about ‘the scars on his back’, having battled to transform the public sector. Not surprisingly, civil servants reply the problem is not the machinery, but lack of clear direction from the top.

Nevertheless, it is striking that in the space of six weeks, Johnson’s government has pivoted from the Dominic Cummings ‘hard rain’, drain the swamp model of reform to Barber’s more sober, technocratic delivery mantra. Cummings was certainly a sceptic of Barber’s efforts to fashion a new ‘science of delivery’. The crucial question, though, is will bringing Barber back actually help to resolve the governance problems enveloping the British state? I worked closely with Barber’s team as an adviser in the Number Ten Policy Unit from 2001 to 2005. Barber was (and is) unquestionably a highly capable public service leader whose emollient style helped build consensus for a rigorous approach to implementation. The Delivery Unit could easily have been feared, loathed or ignored by the civil service. In practice, most departments worked constructively with the Unit, appreciating it would strengthen their capacity to deliver, while enhancing the political reputation of their Secretary of State. The Delivery Unit brought together ‘a small group of dedicated individuals focused exclusively on achieving impact and improving outcomes’. Their favoured tools were targets, ‘a prioritised set of measurable, ambitious, and time-bound goals’, with defined ‘trajectories’ that specified how improvement should be achieved. The Unit brought routine and discipline to decision-making: ‘regularly scheduled and structured opportunities for the system leader, delivery-plan owners, and others to review performance and make decisions’ through stocktakes and delivery reports.

In shaping the delivery agenda, Barber solved a major political problem for the post-1997 governments. Blair had been given a clear ‘instruction to deliver’ in 2001, having been re-elected with a record-breaking majority. Yet Labour returned to power on an indistinct manifesto with few concrete proposals. The party had not confronted how it would transform Britain’s public services after decades of alleged neglect. The competitive internal markets championed by the previous Conservative administration were swept away. But it was not yet clear what should replace them. The Prime Minister was aware voters were becoming increasingly impatient, particularly with the state of the NHS. There was a willingness among the UK electorate to pay more tax, provided extra money yielded real improvements at the front-line. Barber reports his astonishment that Ministers published their Spending Review in 2000 making hundreds of promises of better-quality services, but with ‘no plan’ to achieve them. His approach of measuring and monitoring progress using data and performance metrics, honed while adviser to David Blunkett in the Department for Education after 1997, gave the Number Ten team the structured plan required to secure lasting change. In the remaining six years of Blair’s premiership, there was general agreement that public services progressed, even if they were not transformed.

Nonetheless, in the fifteen years since Barber left Number Ten, our understanding of how to implement policy and influence organisational performance across central and local government has evolved significantly. An influential set of insights come from recognising the problems created when policy and delivery are artificially separated. That divide was institutionalised in the Whitehall system through the creation of Next Steps agencies in 1988 – arms-length bodies responsible for operational delivery working (at least in theory) independently from Ministers and government departments. An unintended consequence of Next Steps was that government became more fragmented, while the understanding of front-line delivery among officials in Whitehall dissipated.

Moreover, the focus of ‘deliverology’ on policy implementation as a technical process makes sense to civil servants and Ministers who trade in abstract ideas and ‘blue skies’ thinking. Yet for those engaged in ‘street-level’ provision of services, working directly with citizens and other professionals on the ground, the delivery agenda was perplexing. Particularly bewildering was the focus on technical structures rather than culture and relationships. It is striking that over the last decade, the NHS – a fairly traditional public service by any standard – has been developing very different transformation models that recognise the complexity of policy, as the table below depicts: 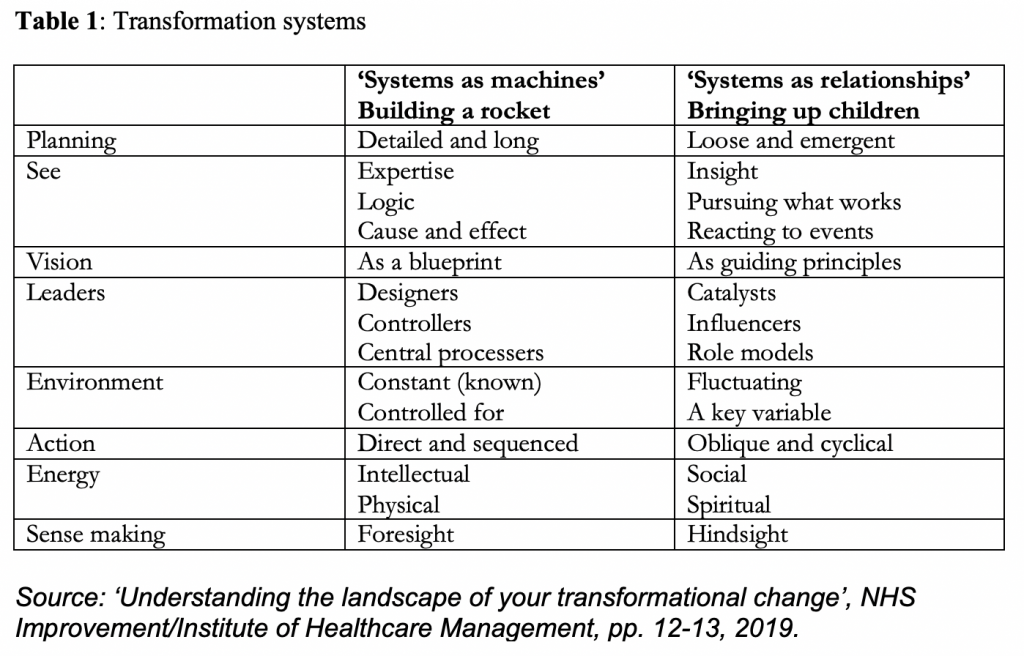 Barber’s ‘deliverology’ falls squarely into the ‘systems as machines’ approach. It understands policy implementation as a cause/effect process where solutions are readily identifiable and the machine delivers the correct outcome – exemplified by the ‘building a rocket’ metaphor. Yet many policy problems, notably the striking example of ‘raising a child’ in disadvantaged circumstances, relate to complex systems. Problems are not necessarily clearly understood, while different actors have diverging perspectives on the nature of the problem (‘wicked problems’). Many solutions are attempted, but the results are often unclear and there are unintended consequences.

It is evident that during the COVID-19 pandemic, Whitehall’s systems proved unsatisfactory due to the persistence of the ‘systems as machines’ mindset, reinforced by the institutional separation of policy from implementation. If a programme doesn’t work on the ground, lessons have to be learnt quickly, the policy refined. Yet feedback loops are too often weak and slow-moving, since delivery is detached from policy. These problems are more acute in public service delivery systems that rely on outsourcing to private sector providers. Notable examples include Deloitte’s contract for COVID-19 testing, Serco’s commission to operate ‘test and trace’, and Chartwell’s contract to deliver food to children in low-income households. In outsourced delivery, policymakers at the centre invariably fail to receive information rapidly about problems on the ground. As a result, there is too little agility, lack of oversight and consequent failure. In all three cases, the problem is not only implementation, but the fact the policy itself was flawed.

Over the last twenty years, innumerable criticisms have been levelled at the delivery paradigm, including the distorting effect of targets and problems created by Soviet-style centralised planning. Above all, the issue is about attitudes of mind. Treating policy and implementation as analogous to a machine is certain to generate difficulties, creating dashed expectations among politicians and citizens as improvements are not sustained. In her brilliant work, Policy Paradox, Deborah Stone writes that: ‘Politics cannot be cleansed from policy-making in favour of rational, scientific analysis’. In learning lessons from COVID-19 and preceding governance pathologies, it is clear a new approach is needed based on a fundamental overhaul of how policy change is undertaken in the modern state.

Patrick Diamond is Associate Professor of Public Policy at Queen Mary, University of London and a former member of the Prime Minister’s Policy Unit (2001-05).

Photo by Jordhan Madec on Unsplash.