The Wright reforms of the House of Commons’ select committees increased the effectiveness of parliamentary scrutiny in Westminster. Andrew Coulson assesses whether the proposed Betts reforms to local authority oversight and scrutiny committees could do the same for local government.

Only a few years ago, Parliamentary select committees were often dismissed as distracting sideshows – comparable in terms of wasted time to Parliamentary Questions. This is no longer the case. Most commentators now agree that they are more interesting and effective in their influence on policies than parliamentary debates. Indeed, the 2017 Audit of UK Democracy judges them, along with the post-hoc spending scrutiny work of the Public Accounts Committee (acting on the National Audit Office’s reports), as ‘one of only two areas where the Commons is clearly contributing to detailed policymaking’.

The same cannot be said about overview and scrutiny committees in local government. These were created by the Local Government Act 2000 at a time when Tony Blair and those around him hoped to centralise local government decision-making in elected mayors, strong leaders and cabinets, and powerful chief officers who they could deal with from Whitehall. They had little faith in the political contributions of backbench councillors.

In the House of Commons, the biggest catalyst for increasing the select committees’ demonstrable policy impact, as well boosting their public and media visibility, was the ‘Wright reforms’ – named after Dr Tony Wright MP, one-time University of Birmingham academic, Labour MP for Cannock Chase and in the 2000s Chair of the Commons Reform Committee. In 2009, the Committee recommended a series of procedural changes aimed at increasing backbench MPs’ ability to scrutinise legislation effectively, most important of which were the election of select committee members and chairs by secret ballot, and the establishment of the Backbench Business Committee. In 2010, the incoming Coalition government implemented at least some of the proposed procedural reforms – sufficient to enable Nat Le Roux from the Constitution Society, writing for Democratic Audit, to judge that they had played a significant part in changing the relationship between government and Parliament. 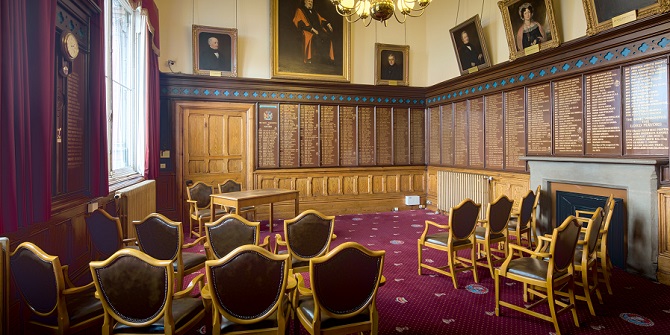 The select committees had become, far more than before, the property and agent of the House of Commons as a whole, and in particular its backbenchers. To the chagrin of the formerly hugely influential party whips, most committee chairs are now elected by a secret ballot of all MPs, and committee members selected by their parties through internal ballot. They report to Parliament and are serviced by clerks and researchers who are employed by Parliament, not civil servants who report to Ministers. Their hearings are often newsworthy, as print media and the BBC Parliament channel have been quick to realise.

In contrast, the performance of local authority overview and scrutiny committees, especially in these days of austerity, is, to say the least, patchy. Much has been achieved, especially in larger councils which have resourced scrutiny better, and in health scrutiny. But, increasingly, most scrutiny committees are far from independent of their executives, and have few powers to ensure that their recommendations are taken seriously. Their chairs are elected by political majorities. Their reports are not required to go anywhere in particular, so they often end up reporting to cabinets, the very people they are supposed to be holding to account. Their levels of staff support are so low that often they do not have the capacity to write effective independent-minded reports.

This, perhaps, will change. The House of Commons’ Select Committee on Communities and Local Government – chaired by Clive Betts, a Labour MP and former Leader of Sheffield City Council – reported in December 2017 on its distant cousins, overview and scrutiny committees in local government. Its main recommendation is that scrutiny committees should report to Full Councils, and have much stronger powers of access to information and evidence, and the ability to call individuals to account. I suggested this in 2011, and it was a key element in the written evidence submitted by the Institute of Local Government Studies (INLOGOV) to the Select Committee.

The Committee’s other recommendations would strengthen the position of council scrutiny committees in relation to the executives, and require local authorities to demonstrate that they have independent and effective operational arrangements for scrutiny. All councils would have a statutory Scrutiny Officer who would be required to report annually on the state of scrutiny in that council. The Betts report also endorses inquiries into events such as those at Mid-Staffordshire Hospital, Rotherham in relation to child abuse, and (potentially) the Grenfell Tower fire. Local authority committees are encouraged to scrutinise contracts, however sensitive, and to work closely with service users. They should have rights to information held by the Council.

The report also supports cross-party chairing, a key feature of the Parliamentary select committees, but has held back from following the Guidance in Wales, which requires opposition parties to chair at least one scrutiny committee in each council. Instead it favours pilot arrangements to evaluate the impact of this in a number of local authorities. The Committee also condemns as inadequate the arrangements for scrutiny presently proposed for Combined Authorities, especially in comparison to the present arrangements in the Greater London Authority where the members of what are effectively scrutiny committees are directly elected and properly resourced.

Scrutiny committees will not always operate smoothly. Just like Commons select committees, they require diplomacy. They need councillors who understand the processes of questioning and who have the skills to do it. Ideally committee members should have worked in a particular area of council responsibility for long enough to know how the system works and where the pressure points are likely to be; otherwise they may find it difficult when they take on experienced council officers. It requires skills that are not always appreciated by political parties – not just street politics but the capacity and interest to learn and get involved in the detail of how services are managed, and then to use their casework and contacts in the community to bring in fresh thinking and ideas.

All this does not mean that there will be much change overnight. A select committee report only goes as far as a set of recommendations. To make scrutiny the property of the Full Council will need primary legislation. To get scrutiny committees recognised as the place where a council’s cabinet members, senior officials and (potentially) all the other notables in the area are held to account requires a culture change in many local authorities. If the bland and inconsequential evidence submitted by the Society of Local Authority Chief Executives and Senior Managers (SOLACE) to the select committee sends any kind of signal, it will take more than advisory guidance to persuade those at the top in many councils to see the potential benefits.

But, as any experienced scrutineer will tell you, a start has been made, seeds have been sown, a report has been published which will be referred to in future, and the potential benefits have been put on display. With a fair wind, the day will come to pass when scrutiny committees in local government are as respected and listened to, and seen as important in local politics and elections, as are the Parliamentary select committees.

Note: this article was originally published on our sister site, Democratic Audit UK.

Andrew Coulson is an Associate of the Institute of Local Government Studies at the University of Birmingham, with a special interest in political leadership and scrutiny in local government. He was a City Councillor in Birmingham between 1990 and 2004, and the Cabinet Member with the portfolio for Regeneration for the last three of those years.

Electing mayors for more English cities would increase local democratic accountability and widen political participation. But the government must grant them real power and freedom

The Government’s Localism Bill gives local authorities freedom to do what central government wants. If true ‘localism’ is to develop, the government must change its thinking.