Rikki Dean, John Boswell, and Graham Smith analyse an attempt to design a systems-oriented democratic innovation: the NHS Citizen initiative. They write that, while the initiative pioneered some cutting-edge participatory design, it failed to resolve well-known obstacles to institutionalisation. They argue that similar projects must evolve strategies to meet such challenges.

After more than 20 years of experimentation, practical innovations rooted in classic deliberative theory are suddenly making headway in mainstream ideas about how we do democracy. Citizens’ Assemblies are particularly in vogue following the success of the Irish Constitutional Convention. In Britain, there have been calls from across the political spectrum for a Citizens’ Assembly on Brexit. Even social movements are calling for Citizens’ Assemblies – they are one of Extinction Rebellion’s three core demands for tackling the climate crisis.

All of these problems have been at play in the debate over whether to hold a Citizens’ Assembly on Brexit. Rory Stewart, for instance, could not answer Jon Snow’s question of what he would do if a hypothetical Brexit Citizens’ Assembly recommended leaving without a deal or remaining in the EU, giving the strong impression it would be ignored. The implicit message being that a Citizens’ Assembly is fine if it recommends what we want it to recommend. The disconnection issue is demonstrated by the fact that many of the politicians calling for a Brexit Citizens’ Assembly were unaware that one had already taken place in 2017. Finally, there was no appraisal, beyond some magical thinking, of how the Assembly would have the legitimation capacity to alter the parliamentary arithmetic nor the force of the original referendum, especially given the one conducted in 2017 hadn’t.

To try to address these issues, Citizens’ Assemblies and other deliberative initiatives are increasingly augmented by what we call a systems-oriented approach to designing democratic innovations. We argue that there are two core propositions to this approach: first, democratic innovations should be designed so that they are embedded into the political cycle and connect across existing networks; second, designs should be divided into components that fulfil different functional labours. A systems-oriented design approach has received little attention in the academic literature, but practitioners are sensitive to these questions, experimenting with more complex, multi-phase designs that try:

In our recent paper in Political Studies, we take a pioneering case of such a systems-oriented approach to democratic innovation – the NHS Citizen initiative – and explore how it played out in practice. Did this approach mitigate the aforementioned perennial problems of institutionalisation? And did it create new problems?

NHS Citizen was a participatory initiative launched by the appointed Executive Board of NHS England. At the time, NHS England was itself a newly created body, following the 2012 Health and Social Care Act. The Board needed to respond to its statutory requirement to engage the public, and assuage its own concerns that its decisions lacked public accountability. Initial plans for a standalone Citizens’ Assembly to inform the Board’s decision-making slowly morphed into a hugely ambitious design, which bore strong affinities with, and was at least in part inspired by, the new systems’ thinking.

Echoing the systemic emphasis on the distribution of functions across settings, the eventual design consisted of several interacting parts categorised into three broad stages – called Discover, Gather and Assembly – each of which had its own function. The NHS has a lively civil society, with a range of NGOs and patients groups advocating for certain policy positions, as well as a range of other avenues for public and service user participation. Discover aimed to connect to these existing conversations in private and public spaces, and ensure they fed into the Assembly. Gather provided a forum where anyone could raise an issue, either to be worked out in the forum, or as a potential topic for the agenda of the Assembly. Discover and Gather thus together provided an open agenda-setting process that was intended to embed NHS Citizen in the relevant civil society and institutional networks, as well as ensure that the agenda for the Assembly was constructed from public concerns not simply the concerns of the NHS England Board.

There was initial enthusiasm both from participants and from the Board for this exciting new form of innovation. However, over time, a series of obstacles emerged, and the initiative for all intents and purposes shut down less than three years into its run. The way the process developed over the period demonstrated the ever-present difficulty for participatory organisation to connect both with public space and empowered space.

For the first Assembly, the agenda-setting process was not fully operational, meaning the Assembly dealt with issues that largely reflected the Board’s concerns. The Board were very positive about this first Assembly. Once Gather was better established, it genuinely did shift the agenda so that is was more reflective of civil society concerns. However, this culminated in the Board losing faith in NHS Citizen and choking off funding for the process. In addition, an unanticipated effect of the separation into different parts was that some of the participants in the earlier stages were unhappy about being prevented from taking part in the Assembly, which planned to use random selection. Their rebellion in the end forced a change to the selection mechanism for the Assembly. NHS Citizen thus pioneered some promising practices for better connecting deliberative assemblies to civil society, but this was at the cost of institutionalising some irresolvable tensions.

The successes and failures of NHS Citizen as a systems-oriented democratic innovation can help to inform other similar future initiatives that attempt to realise complex, multi-phase designs, connected to both the public and political decision-makers. The recent spate of Assemblies on climate change by local authorities in Britain are an example, where we may find similar tensions between the civil society actors whose demands inspired the Assembly and the local authority that organises and funds it. This is not the only lesson. In our paper we also draw out the issues of financing systems designs, of designing the participatory process with its users, and where to draw the boundary for systemic innovation.

John Boswell (@Boswell_JC) is Associate Professor in Politics at the University of Southampton.

Graham Smith (@Smith1966G) is Professor of Politics and Director of the Centre for the Study of Democracy at the University of Westminster, UK.

All articles posted on this blog give the views of the author(s), and not the position of LSE British Politics and Policy, nor of the London School of Economics and Political Science. Featured image credit: Author provided. 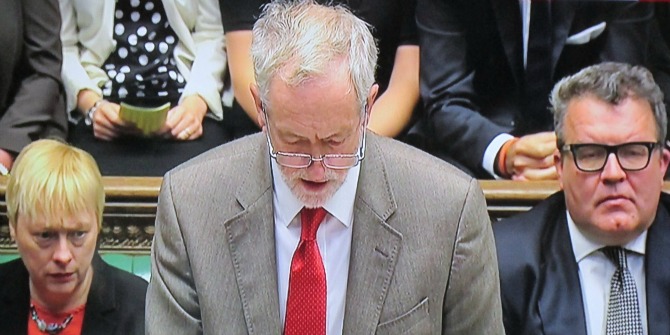