The government is planning a national insurance rise to fund an overhaul of social care. This is the wrong way to do it, argues Jeevun Sandher. Increasing taxes on the hard-working young, rather than the wealthy old, will further penalise this less lucky half. It will particularly penalise young people without rich parents – the more income and wealth that older generations can gain today, the more some parents will have to pass on to their lucky children who did nothing to earn it.

Our social care system is in crisis – vulnerable people are being left without food for days at a time, and around 1.5 million older people are not receiving the care they need. The government wants to raise £10 billion more per year to improve our shockingly poor social care system. They are absolutely right to do so. But the current plan to increase national insurance rates to pay for it is precisely the wrong way to raise the cash. It will punish the young and, specifically, those who did not have the good sense to be born with rich parents.

National insurance is only paid by non-pensioners who work. It is less progressive than income tax (you start paying at £9,568 per year rather than £12,570) and it’s not paid by either pensioners or landlords. Instead, the government could choose to raise income tax to pay for social care – it is more progressive and is levied on both pensioners and landlords. They could go even further and implement a Japan-style system that increases income tax by 2 percentage points for the over 40s. Figures 1 and 2 below show the impact of these different plans – a system that raises income tax (for the over 40s) is much fairer to both the young and those on low-incomes. 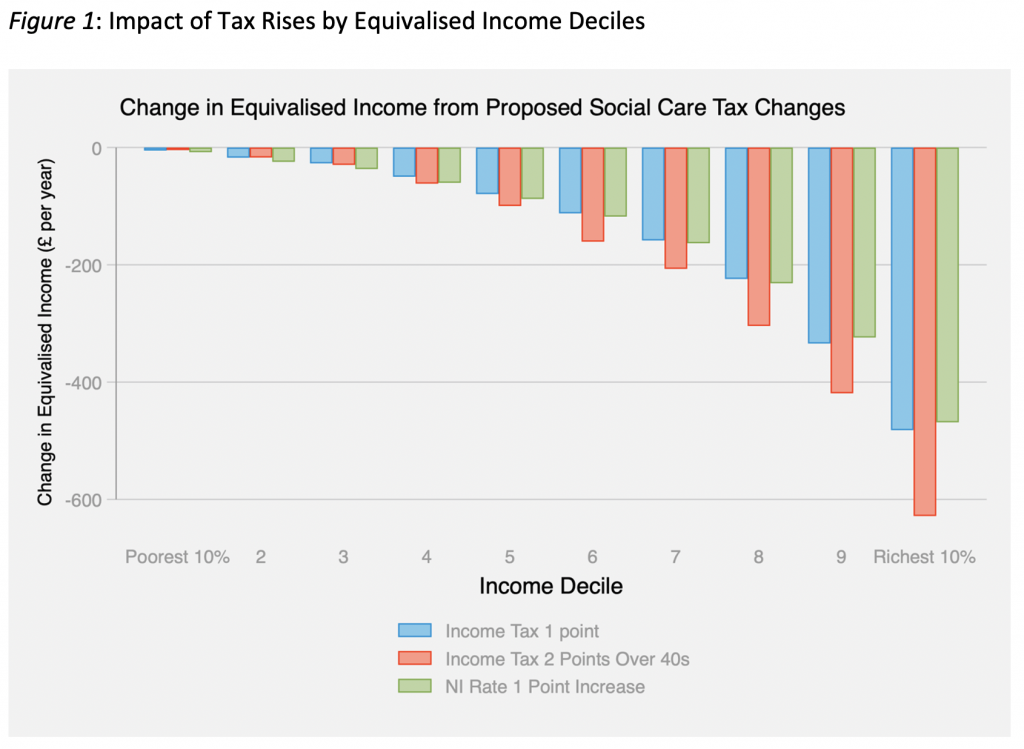 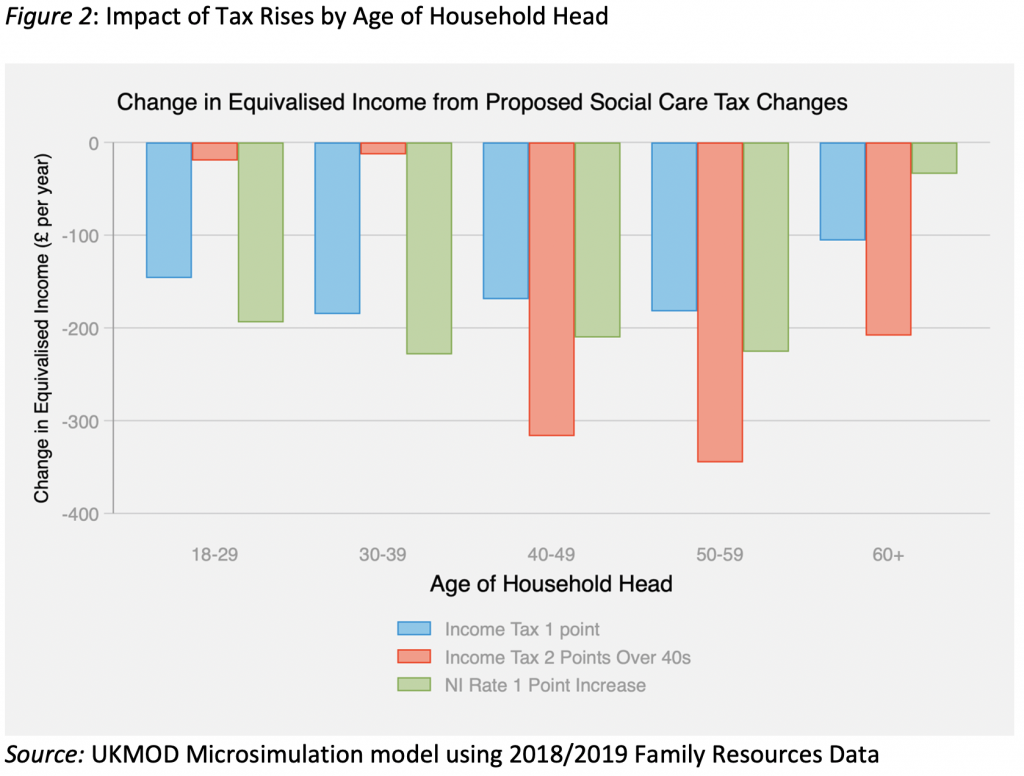 These calculations, however, understate the cost of a national insurance rise for young people without rich parents – they only show who will pay taxes on today’s income. What these calculations do not show is how unfair it is to tax the hard-earned income of young people while not touching the unearned capital gains of older generations. In the two decades leading up to the pandemic, house prices rose by around 110% while average earnings by only 20% in real terms (Figure 3). 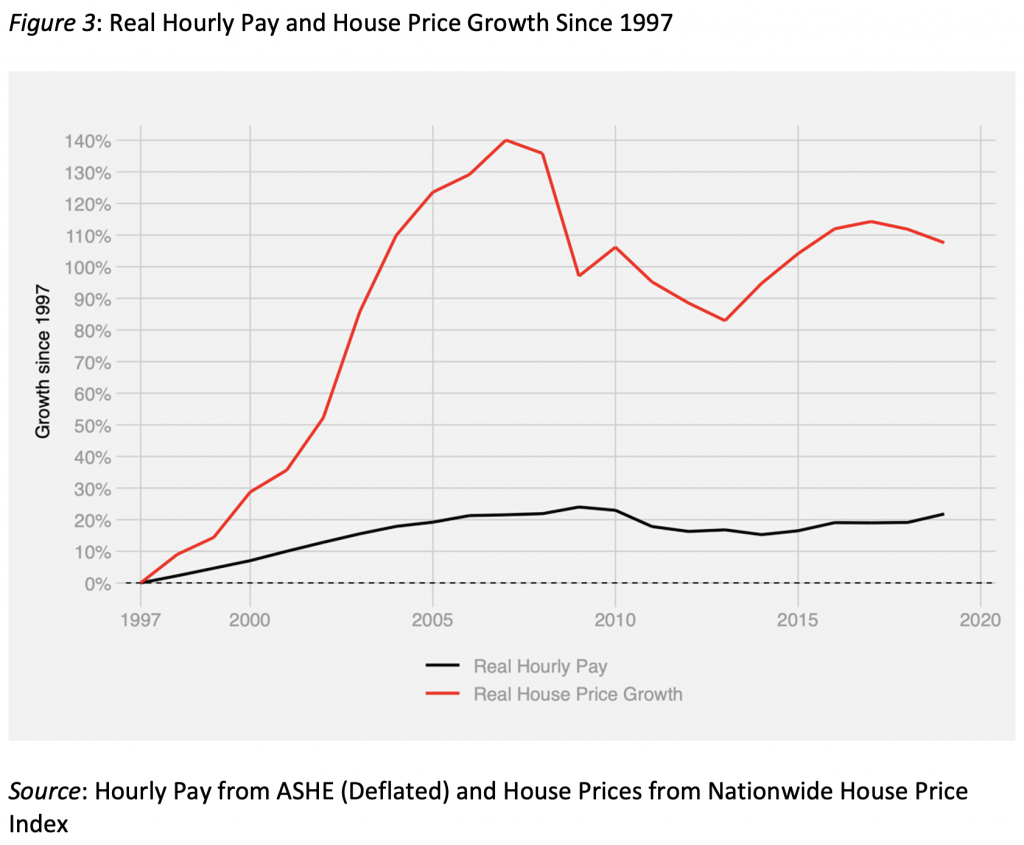 Working millennials are now being asked to pay for the care of Baby Boomers who had the luxury of watching their wealth grow with rising house prices. No Baby Boomer earned the rise in land values that led to exploding house prices and their rising wealth. Boomers reaped the rewards of a changing economy, where good jobs with high wages became concentrated in major cities and where successive governments did not build enough houses to meet rising demand. Rising house prices led to a dramatic rise in housing wealth for Baby Boomers. Raising taxes on the massive unearned increase in wealth that older generations gained is the fairest way to pay for their care.

Today, young people are already being made to give increasing portions of their hard-earned wages to older generations in rent. They also cannot save and build wealth through home ownership in the same way that the Boomers did. It took around three years to save for a deposit in the 1980s, it now takes around 20. Young people are now half as likely to own a home as Baby Boomers were at the same age. And now this government wants to implement a national insurance rise that will further reduce the wages of the young but preserve the wealth and heightened rental incomes of the old.

This pandemic has made the plight of young people even worse. House prices have risen by 13% and rents kept rising while earnings didn’t grow. Young people also suffered the worst hit in the labour market – they were the most likely to lose their jobs and graduate recruitment plummeted. Raising national insurance rates will mean that the pandemic-reduced incomes of young people will take a further hit.

But not all young people will suffer if national insurance rises – some will benefit from an unfair tax levied on non-pensioner earnings. Specifically, young people with rich parents will gain from any tax change that benefits their parents. Well-born young people are already benefiting from their rich parents’ increasing wealth – around half of young people who buy a house get help from their families. The other half are paying an ever-growing price for not having wealthy parents.

Raising national insurance rates that hard-working young people pay will increase unfair inequality both between and within generations. We should raise taxes to stop vulnerable people being left without food, a bath, and company for days at a time. But there is a better way to do it. Older generations got lucky – they got to buy houses cheap and watched them explode in value. Tax them instead.

Jeevun Sandher is a PhD candidate in the Department of Political Economy at King’s College London.

Rather than simply reading the rioters the Riot Act, we must ensure that lessons are learned from this week’s violence. A credible enquiry is essential. 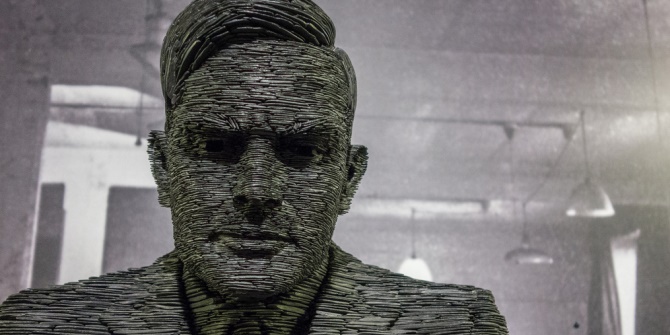