We need hundreds of thousands of new homes in Britain. But in its present form, the government’s proposed new planning framework is not likely to deliver them.

We have far too few homes in Britain, and this drives house prices upwards. Even the recent collapse in mortgage availability has done little to drive prices down substantially, especially when compared to the US. Tim Leunig examines the government’s new planning proposals and finds that rather than promoting the building of new homes in areas that need them, it is likely to be a NIMBYist’s charter.

There is too little housing, particularly in the south east, to maximise any sensible definition of social welfare. This manifests itself in terms of prices, but what really matters is quantity. Too many kids don’t have space to do their homework, too many adult kids have to live with their parents, too many single adults and couples share houses, and so on. Furthermore, the lack of housing in the right place means that too many people have to commute long distances, or live in areas with weak employment prospects. The lack of housing also leads to high housing costs, in line with supply and demand.

We therefore need more new housing. While there are things that we can do with the existing stock – for example, reforming probate so that these houses get on the market more quickly – the quantity of housing is too low. 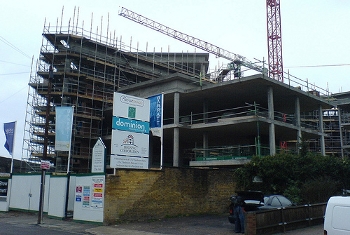 We have seen a huge collapse in mortgage availability, but house prices have not fallen to the extent that they did in the US. This is because the US had a significant housing bubble and we did not. Indeed, I would argue that we currently have a “negative housing bubble”, in that the lack of sensible mortgage availability means that current house prices are below their fundamental level given supply and demand. House prices will rise sharply as soon as the mortgage market recovers.

We therefore need to build more houses. No ifs, no buts. It would be reasonable to aim for 500,000 a year for the foreseeable future – say 10 years. It is plausible that this would get rid of the backlog of unmet housing need and suppressed demand. They cannot all be built on brownfield sites – there are not enough of them, and they are not all in the right places. We therefore need to build on greenfield sites as well.

The National Planning Policy Framework (NPPF) rightly sets out to simplify a very complex system. There are issues – such as the definition of “sustainability” that are poorly defined. The current document may be too short. But most fundamentally we now have a system that claims to have a presumption in favour of development (which is not new, as many have remarked), while emphasising the primacy of the local plan. This is contradictory. We know that local plans have to be in conformity with national planning guidelines. What we don’t know is what that means.

It is likely that, if left to themselves, areas will opt for very low levels of development. There is already evidence that councils are scaling back housing numbers from the levels defined by the Regional Spatial Strategies, which were themselves too low to deliver decent homes. What we do not know is how low they will be allowed to go, because we have no sense of what it means to be in conformity with National Planning Guidance. After all, developers would build on every square inch of the affluent inner Home Counties – Bucks, Berks, Surrey, if the presumption in favour of development allows.

Let us imagine that an area pays consultants a large amount of money to tell them what they want to hear, namely that a relatively low target is appropriate for their area. They come up with a popular local plan on that basis.

Who decides whether this holds? The planning inspectors (aka Whitehall). Presumably there will be an appeal mechanism in case the inspectors make the wrong call. So people on each side hire lobbyists, etc, and it goes upwards to the Secretary of State. Perhaps to judicial review?

The reality is that neither I, nor any other respondent, or any person, including the relevant ministers, has a clear sense of how the tension between local people generally wanting less development will be balanced by due process against the presumption in favour of development.

As a nation we can choose one of the following options (these are in order, worst to best):

a)     Build few houses, and have them allocated by the market. The result is a country of haves and have-nots, in which many people are priced out of a decent standard of living, and in which benefit bills for housing are huge. I think that this is barbaric.

b)     Regulate housing, by either passing laws against having an excessive number of square feet per resident, or high taxes on the “overhoused”. I think that this is unnecessary.

c)      Require house building in relevant areas, under pain of losing central government grant, or going further. If we can jail people for price fixing, we can jail council leaders and officers who do not grant enough planning permissions.

d)     Allow developers a free for all. This would give us enough houses, but the communities would be poorly planned, and needlessly so.

e)     Give local authorities sufficient incentive to say yes to development. All NIMBYs have their price, and the amount by which land prices rise when development is permitted is significant. It is likely to persuade a lot of people to accept development, rather than oppose it. The New Homes Bonus is too small, perhaps by an order of magnitude. That is why I proposed Community Land Auctions. The Barker Review urged the government to pilot them, the recent budget stated that government would work towards a pilot, but I am not aware that anything has happened.

Finally, changes on the scale of the NPPF should, as a rule, be piloted. Abolishing the RSS without evidence of how the new system would work was not a sensible approach to policy making.