Even after Brexit, most would-be MPs believed that they should prioritise their own views over those of their voters

Even after Brexit, most would-be MPs believed that they should prioritise their own views over those of their voters

Should lawmakers prioritise their own policy judgments or the views of their voters when the two are in conflict? Siim Trumm and Andrew Barclay explore what parliamentary candidates think the answer to this question should be. They find that most candidates expect MPs to prioritise their own views, a belief that is particularly prevalent among incumbents and male candidates.

The result of the 2016 referendum exposed profound divisions between political elites and voters. Where a majority of the voting public opted for Leave, roughly three-quarters of MPs supported Remain. This difference in outlook came under the spotlight during the parliamentary impasse over the terms of leaving the EU, whereby MPs were presented in some quarters as obstructing the will of the public. At the heart of this disconnect were different interpretations of the role of elected representatives.

Most candidates expect MPs to prioritise their own judgment

In our recent article, we use the Representative Audit of Britain surveys of candidates who stood at the 2015 and 2017 General Elections to examine whether they believe MPs should prioritise their own views or those of their voters, when the two are not aligned. Table 1 shows the findings by election year and party. Overall, candidates were more inclined to believe that MPs should prioritise their own judgments by a ratio of roughly 2 to 1. Interestingly, however, there are no meaningful differences between the two elections, suggesting that the context of Brexit did not substantially alter how candidates thought about the role of MPs. We do observe some variation between parties though, with Conservative candidates being most inclined to say that MPs should prioritise their own views (79%). However, with the exception of UKIP, a sizeable majority of candidates of all other parties believe that the judgments of politicians should take priority over the wishes of their constituents, when these diverge.

We also examined which characteristics were associated with being more likely to prioritise the views of voters. Figure 1 shows the predicted estimates for the characteristics that stood out. Here, we find that incumbents are over 15% less likely to believe that MPs should prioritise constituents’ views over their own when compared to challengers. The roughly two-thirds of candidates who prioritise their own judgment in Table 1 is, therefore, very likely to be an underestimate of how elected MPs attach greater importance to their own judgments.

Most of the remaining differences are attitudinal. Candidates with a negative view of MPs, who are less satisfied with the state of democracy, and believe that voters should have the final say on policy, are significantly more likely to expect MPs to prioritise the views of their constituents. However, we also observed a strong and significant gender effect. Female candidates are estimated to be around 17% more likely to believe that MPs should prioritise their constituents’ views compared to their male counterparts. 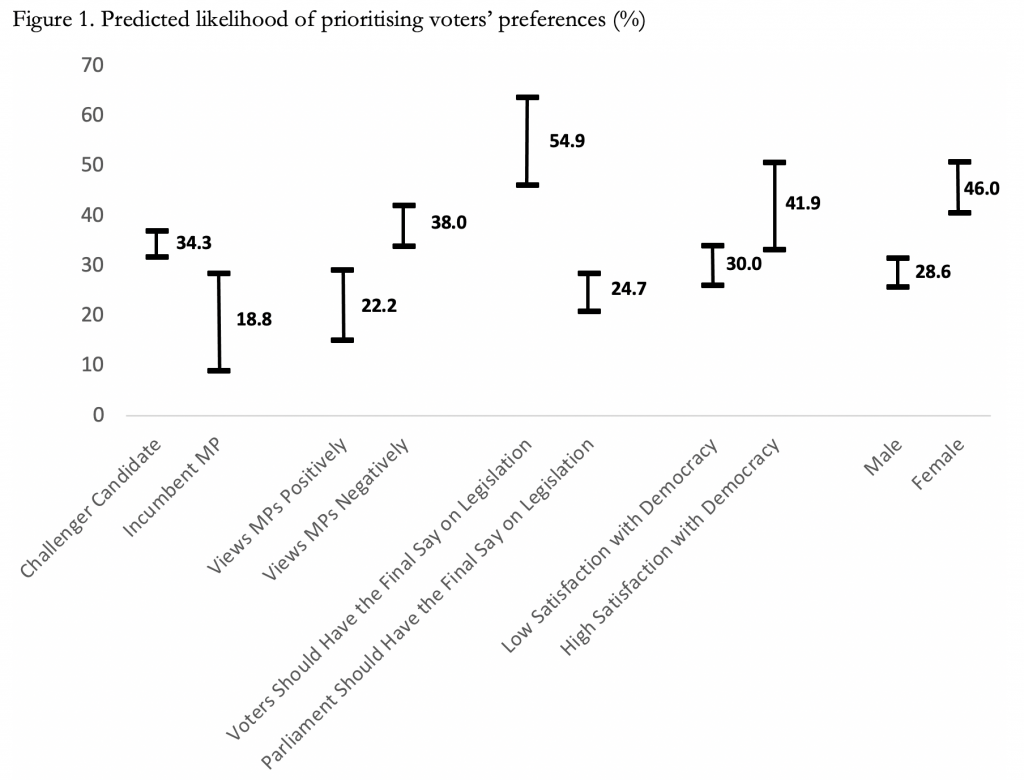 Limited evidence of a ‘Brexit effect’

Although we have seen that there was little change in average role perceptions between 2015 and 2017, we can also compare individual candidates’ views before and after the referendum. Our data contains 295 cases where we surveyed a given party’s candidate within a certain constituency in 2015 and 2017 (197 of these were the same candidate, therefore, allowing us to separate cases of individual candidates changing their view, and parties selecting new candidates who hold different views to their predecessors).

We present the comparison of candidates’ views in Table 2. Interestingly, despite the context of Brexit, we do not find a fundamental over-time change in how candidates think about representation. Looking first at individual candidates who were surveyed in 2015 and 2017, 148 out of 197 (75%) held the same view after the EU referendum as they had done before. This does leave around one quarter of candidates who changed their view over a relatively short period, but these shifts were broadly evenly split between candidates who changed their view to prioritise their constituents’ preferences, and those who had become more convinced of the importance of representatives’ judgments. A broadly similar picture is found when including cases of parties switching candidates: just over 1 in 3 showed a different view of representation in 2017 versus 2015, but these changes were slightly more likely to value the judgments of MPs over those of voters. 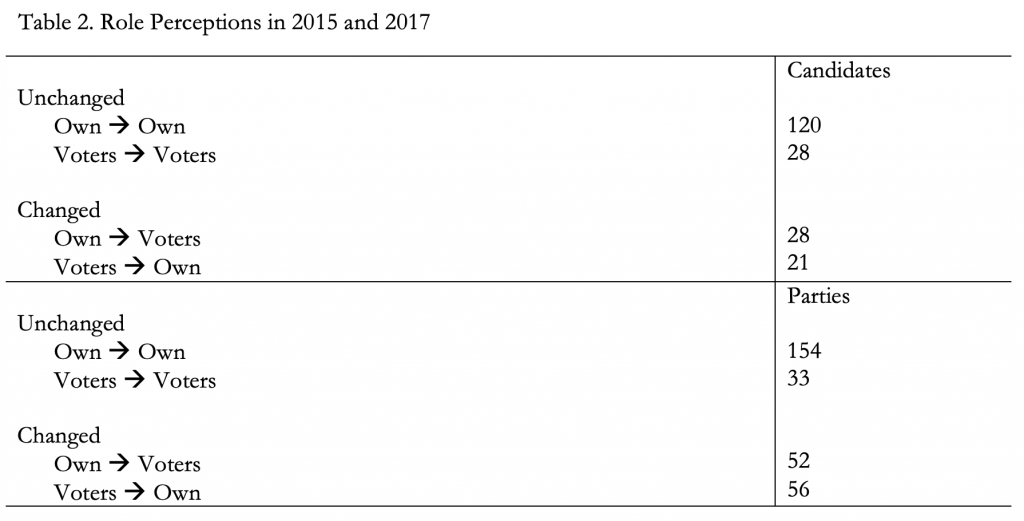 Overall, we find very little evidence that Brexit and the subsequent public discourse of an ‘out-of-touch’ political class has pressured politicians to prioritise their voters’ preferences above their own judgments. A shift towards insisting that MPs should prioritise their voters’ views, over those of their own, does not appear to be imminent. However, there is a caveat to this in the form of substantial gender differences. Female candidates are much more likely to view constituents’ preferences as more important than MPs’ judgments. Should there be a continuation in the trend of increasing gender diversity in Parliament, we can expect the position of an average MP to move towards prioritising voters’ views over those of their own.

Siim Trumm is Associate Professor in the School of Politics and International Relations at the University of Nottingham.

Andrew Barclay is a Research Associate in the Department of Politics and International Relations at the University of Sheffield.

Photo by Agustín Molina on Unsplash.

Boris Johnson: “I can see what needs to be done to secure London’s future”.

Local elections vote shares: the measures used to project local votes nationally are better than looking at the number of seats won or lost, but local voting does differ from general election vote intention