John Connolly draws on new survey data to argue that the UK public have a strong sense of individual responsibility when it comes to containing the spread of the virus and resolving the crisis. He also finds that the decisions of governmental actors at multiple levels are generally perceived as positive, but warns that clear communication from government is crucial in maintaining this support as the UK prepares to exit the lockdown.

The COVID-19 pandemic is the most significant test of British crisis management for generations, perhaps since the Second World War. The pandemic has required political leaders across the UK to make unprecedented decisions to control the spread of the virus. There will be an exponential amount of evaluations into the handling of the crisis for many years to come, but understanding the level of public resilience is best analysed when crises are ongoing and at their acute phase, or at least nearing it. This is because research at the acute period tells us about the levels of societal resilience, degrees of tolerance for the duration of implemented crisis measures, and it can shine some light on who the public feel is to blame. The latter stimulates formative questions about lesson learning, which is a key aspect of framing the dynamics of post-crisis politics.

We conducted a public attitudes study about the crisis when the UK was already in its fourth week of lockdown and when the Prime Minister was being treated in hospital after contracting the virus. The survey, a representative one of the UK adult population (n= 2100 people), was administered between 10 and 15 April.

Our survey shows that the public have a strong degree of self-awareness about their own responsibility when it comes to resolving the crisis. The majority (75%) believe that they can personally influence whether they will become infected or not. Moreover, 76% report that they follow the government’s guidelines of trying to spend less than an hour out of their home on a daily basis.

However, the resilience of the public depends on their perceptions about the extent to which they regard the government’s actions as acceptable and proportionate. A large majority (83%) perceive government measures as necessary for preventing a major national catastrophe. With at least three more weeks of the lockdown to follow, 84% of respondents still supported or strongly supported restrictive measures that allow people to leave their homes only for essential reasons. International organisations (such as the World Health Organisation) are also considered by the public to have responded to this crisis very or fairly well (62%). In this respect, the public has regarded the decisions of governmental actors at multiple levels of governance as positive.

Yet there is a delicate balancing act for government in that there is no strong support for more intrusive measures or a lengthy lockdown beyond six months. Only 42% believe that the government’s use of mobile phone records to check whether people with COVID-19 follow instructions on self-isolation would be fairly/extremely effective. However, only 50% of respondents support maintaining the lockdown for at least six months and 57% believe that the use of the military to enforce isolation measures would be somewhat or extremely effective.

The importance of personal responsibility also comes through in our survey given 75% public considered that the most important factor for the spreading of Covid-19 in the UK are people who do not follow social distancing measures.  Furthermore, 61% of people consider ‘each and every one of us’ as is responsible for the spread of the virus.

Figure 1: Attribution of responsibility for the spread of the virus in the UK 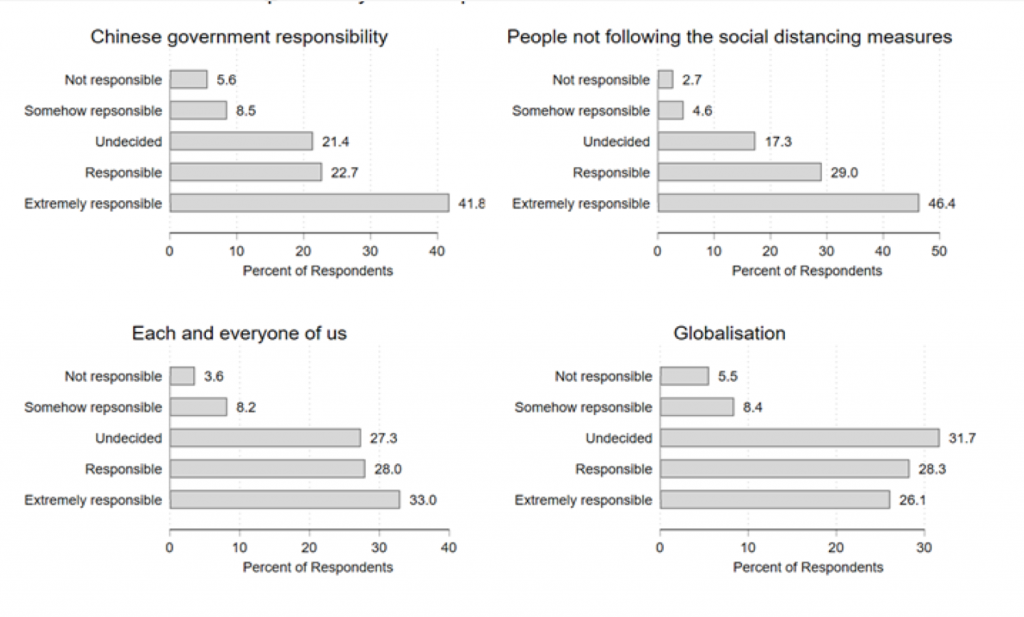 For British policymakers, there might be some comfort to draw from the fact that people have confidence in the way in which the government has responded to this crisis (44% feeling hope and 42% feel acceptance) but crisis managers need to be mindful of the fact that communicating risk in public health crises is a wicked problem: 33% of the public struggle to understand politics and 49% feel that politicians prefer talking about possible policy actions instead of actually taking action. All of this needs to be seen in the context of the fact that the UK Government influence public views on the pandemic more significantly than the NHS, mainstream media, or scientific experts (73%, 60%, 44%, and 41% respectively).

What could be a forthcoming challenge for citizens in helping to resolve the crisis? The exit strategy needs to be clear and devoid of confusion. Phasing crisis restrictions, perhaps for certain parts of the country and for different groups (be they age groups or types of industries), risks the public lacking confidence in how best to adhere to new measures. If the exit strategy lacks clarity, then the pendulum of blame risks being swung more towards the government’s direction.  Clear communication will be very important for ensuring that the government remains within the good graces of public opinion and for ensuring that the public have what they need to continue to take personal responsibility going forward.

John Connolly is Professor in the School of Media, Culture and Society at the University of the West of Scotland. John is part of an interdisciplinary team of academics working on a ‘Pandemic Politics’ project. The team includes Dr Sofia Collignon (Royal Holloway, University of London), Dr Georgios Karyotis (University of Glasgow), Dr Dimitris Skleparis and Dr Andrew Judge. More information about the project, forthcoming analyses, and additional empirical results can be found here.

All articles posted on this blog give the views of the author(s), and not the position of LSE British Politics and Policy, nor of the London School of Economics and Political Science. Featured image credit: by Branimir Balogović on Unsplash.