Nicholas Bloom presents a new index that charts economic policy uncertainty, showing that the current climate of uncertainty is a key factor stalling the recovery and threatening a return to recession. Creating a more certain policy climate would be economically beneficial.

The most striking thing about the recent volatility of global financial markets is that politicians are making the news. The actions of policy-makers and their statements about budgets, bailouts and regulatory reforms are driving the stock market gyrations.

Unfortunately, they cannot agree, which is generating massive uncertainty. In fact, according to our new index, which charts the evolution of US economic policy uncertainty since 1985, it is now close to its all-time high (see Figure 1). This policy uncertainty is a key factor stalling the recovery and threatening a return to recession. 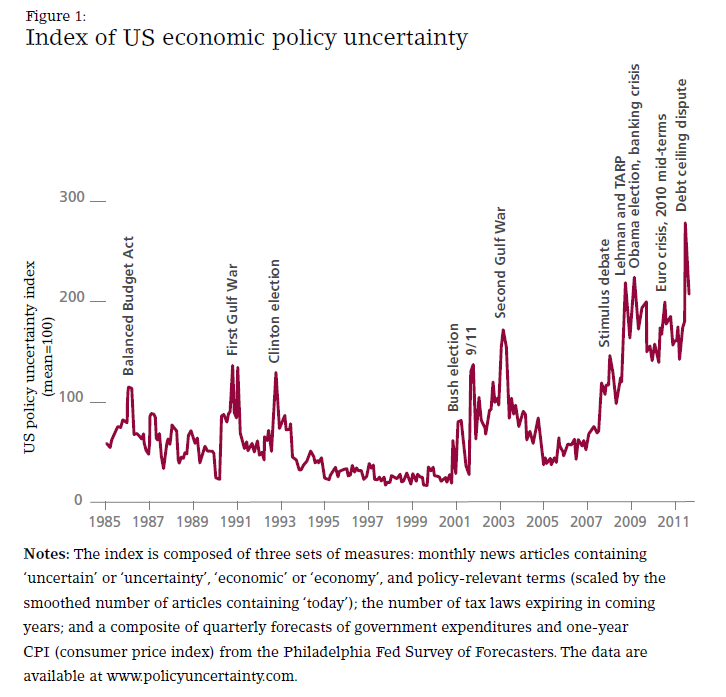 We construct our index of policy uncertainty by combining three types of information: the frequency of newspaper articles that reference economic uncertainty and the role of policy; the number of federal tax code provisions that are set to expire in coming years; and the extent of disagreement among economic forecasters about future inflation and future government spending on goods and services.

Our index shows sharp spikes in economic policy uncertainty around major elections, wars and the 9/11 terrorist attacks. More recently, it spiked sharply after the Lehman bankruptcy in September 2008 and the passage of the TARP (Troubled Asset Relief Program) legislation shortly afterwards. It has remained high ever since, driven by continuing policy uncertainty around the 2010 US mid-term elections, the US debt ceiling dispute and the crisis of the eurozone. 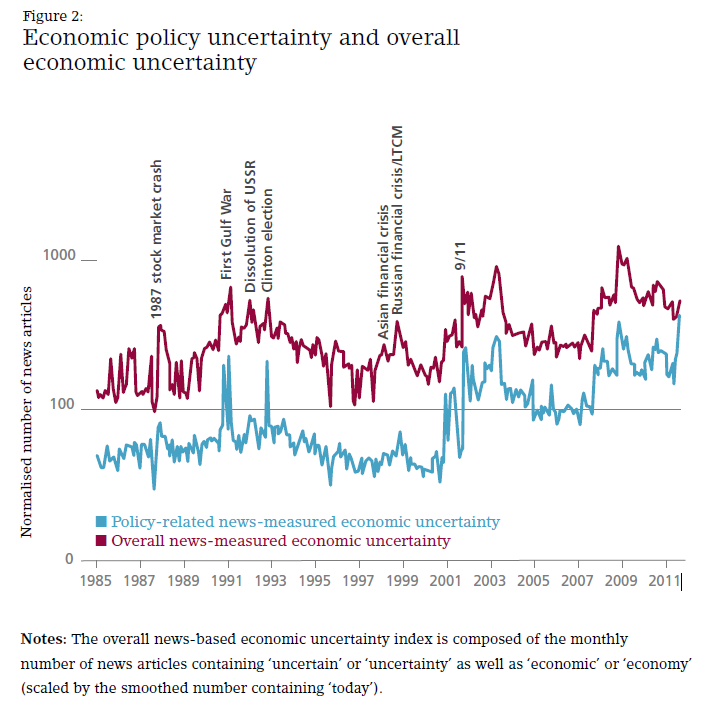 Examples include the Asian financial crisis of 1997 and several bouts of recessionary fears in the second half of the 1980s. In short, the data refute the view that economic uncertainty necessarily breeds policy uncertainty. So why is policy uncertainty so high now? To identify the drivers of policy uncertainty, we drill into the Google News listings and quantify the mix of factors at work. Several factors underlie the high levels of US policy uncertainty in 2010 and 2011, but monetary and tax issues predominate.

One clear example involves the Bush-era income tax cuts originally set to expire at the end of 2010. Democrats and Republicans adopted opposing positions about whether to reverse these tax cuts. Rather than resolve the uncertainty in advance, Congress waited till the final hour before deciding to extend the tax cuts. Other examples include recent moves in the US Senate to increase tariffs on Chinese imports, which threaten to set off a trade war. And in Europe, the continuing debates over potential bailouts for countries and banks contribute to a climate of policy uncertainty.

What makes policy uncertainty so harmful? When businesses are uncertain about taxes, healthcare costs and regulatory initiatives, they adopt a cautious stance. Because it is costly to make a hiring or investment mistake, many businesses naturally wait for calmer times to expand. If too many businesses wait to expand, the recovery never takes off. Weak investments in capital goods, product development and worker training also undermine longer-run growth.

How much near-term improvement could we expect from a stable, certainty enhancing policy regime? We use techniques developed by Christopher Sims, one of the two 2011 Nobel laureates in economics, to estimate the effects of economic policy uncertainty.

The results for the United States suggest that restoring 2006 (pre-crisis) levels of policy uncertainty could increase industrial production by 4 per cent and employment by 2.5 million jobs over 18 months (see Figure 3). That would not be enough to create a booming economy, but it would be a big step in the right direction. 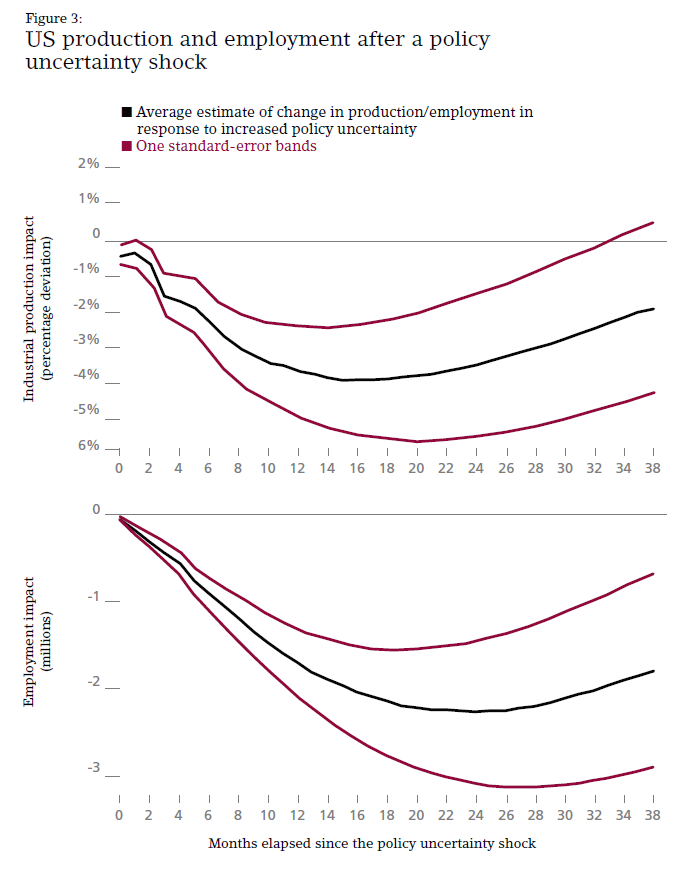 This article first appeared in the Centre for Economic Performance’s Winter 2011/12 magazine.

Nicholas Bloom is an associate professor in the Stanford Department of Economics. His main research interests are on measuring and explaining management and organisational practices across firms and countries, and trying to use this to explain differences in firm and country level growth. He also works on innovation and IT, looking at factors that effect these such as competition, tax, learning and Government regulations. He previously worked as a policy advisor at HM Treasury and as a management consultant a McKinsey & Company. 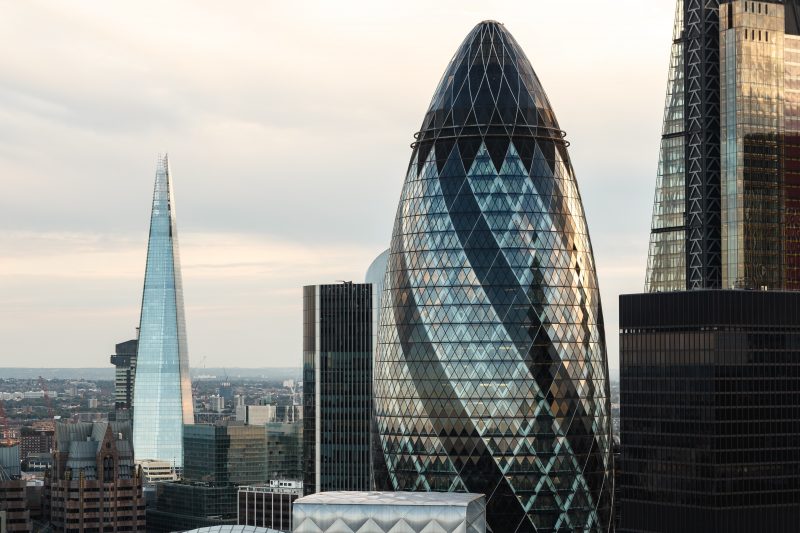