Last month, election forecasters presented preliminary predictions for the British election at the LSE. In this post, Mary Stegmaier and Laron Williams, both from the University of Missouri, present their political-economy model of party support. Their forecast, based on data 3 months before the election, predicts that Labour will win the highest vote share in Britain, but that no party will win a majority of seats. The full paper presenting these results can be found here.

Most public opinion polls and forecasting models point to another hung parliament. In such a tight 2015 British race, the question now is which party will come out ahead? Our model, which accounts for political and economic conditions, predicts that Labour will win 34.75% of the British vote. This vote share gives Labour a solid 3.5 point lead over the Tories, but neither party will win enough seats for a parliamentary majority. We predict Labour will win 299 seats, while the Conservatives will have 245. Thus, another hung parliament, but this time with a Labour lead in votes and seats.

To estimate our forecasting model, we rely on monthly data over the last 10 years from the Continuous Monitoring Survey. This survey asks respondents “If there were a general election tomorrow, which party would you vote for?” We aggregate these responses each month to tally the level of public support for Labour, Conservatives, Liberal Democrats and other parties. The figure below shows how support for the parties has evolved since 2004. Of particular importance for the 2015 election is the dramatic increase in support for “other parties”, as well as the decline in Lib Dem support. 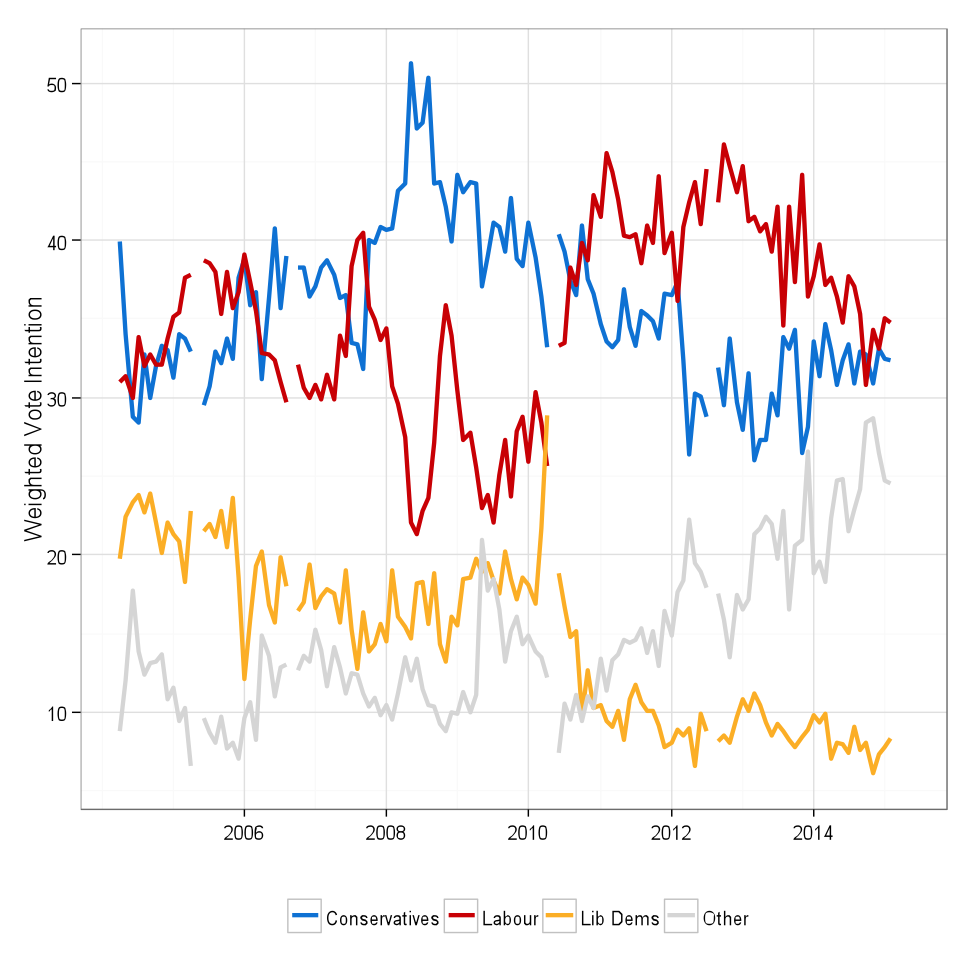 Instead of using only current party support to predict future party support, we turn to theories of electoral behavior to construct a more complete forecasting model. From decades of research, we know that political-economy models perform well. These models typically include past party support, economic evaluations, partisanship, and political events. In order to shift from using these factors for explanation to prediction, we measure them three months ahead of time. This approach allows us to combine our knowledge of the drivers of government support with our aim of accurate prediction well in advance of Election Day. Our models predict party vote shares in the May 2015 election with data from February.

The impact of economic evaluations will differ if the party is holding the Prime Ministership or sitting in opposition. For example, as the economy improves, the Prime Minister’s party should see increased support, while this should lower support for opposition parties. Our model accounts for this.  We also include a count of continuous months a party has led the government to capture the political cost of ruling. Over time, support for the governing party naturally declines. This concept is similar to Lebo and Norpoth’s electoral pendulum.

Our political-economy model predicts that Labour will win 34.75% of the British vote, Conservatives 31.13%, the Lib Dems 7.89%, and the other parties 26.26%. The surge in support for smaller parties with regional concentrations in support means that even with 34.75% of the vote, Labour will fall short of the 326 seats needed for a majority. Using the New Statesman May 2015 Seat Calculator’s Electoral Calculus strong transition model with Ashcroft polls and by-elections, our vote share forecasts convert to 299 Labour seats, 245 Tory seats, and 26 Lib Dem seats. The remaining 62 British seats will go to other parties.

Note: The full version of the forecasting paper is posted here. This article gives the views of the authors, and not the position of the General Election blog, nor of the London School of Economics. Please read our comments policy before posting.

Mary Stegmaier is an Assistant Professor in the Truman School of Public Affairs at the University of Missouri.

Laron Williams is an Assistant Professor in the Department of Political Science at the University of Missouri.