The teams have used a wide variety of different methods, ranging from the analysis of Twitter feeds and local by-election results to looking at historical patterns and undertaking intensive analysis of the latest polls. All agree that no single party will win the 326 seats required for an overall majority. Indeed, only two of the teams think that any party will win as many as 300 seats, and thus most reckon that Britain is heading for a deeply hung parliament.

Many of the forecasting teams have already featured regularly on this blog. The teams include electionforecast.co.uk, ElectionsEtc.com and the Polling Observatory as well as teams from North America. Many of these teams predicted the outcome of the 2010 general election shortly before that campaign began, correctly forecasting that the outcome would be a hung parliament.

However, the forecasters do not agree as to which party will have most seats at this election. Six predict that the Conservatives will be at least narrowly ahead, though the highest forecast Tory tally is no more than 296 seats. Five predict Labour will win most seats, with the highest forecast one of 310 seats. The plot below gives the distribution of seat forecasts from these eleven teams for each party. A table of the full predictions for each forecasting team is given in the appendix. 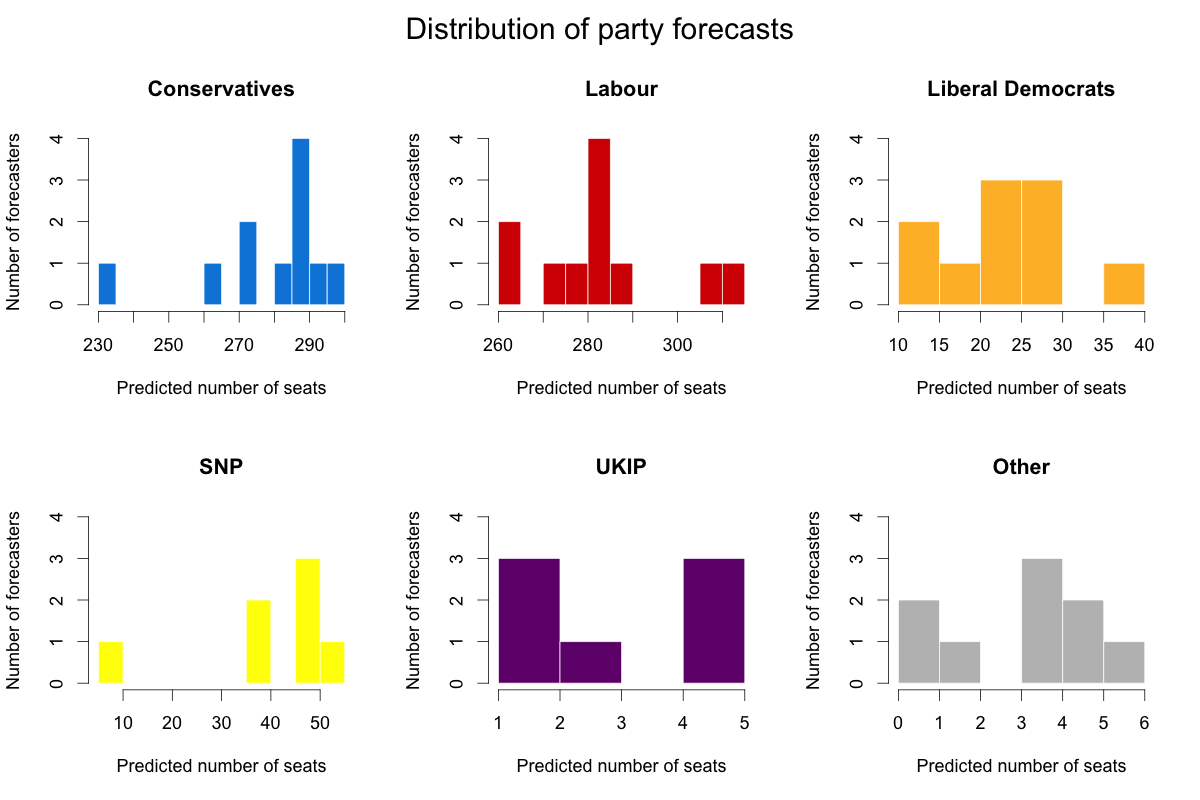 On average the eleven forecasts point to a virtual dead heat with Labour on 283 seats, the Conservatives on 278. These figures are within just one seat of the average from a large-scale survey of expert journalists, pollsters and academics conducted by Chris Hanretty and Will Jennings.

Most agree that the SNP are set to make sweeping gains, on average predicting a tally of 42 seats, and that consequently the SNP could well find itself in a pivotal role at Westminster after May 7th.

Stephen Fisher of Oxford University, one of the organisers of the conference said, ‘While it seems clear that Britain is heading for a hung parliament – and most likely one in which no party is even close to an overall majority – it is far from certain which party will emerge with most seats. Much could turn on whether a relatively small number of votes switch in one direction or the other. It appears that during the next six weeks voters genuinely have the fate of David Cameron and Ed Miliband in their hands.’

We will be posting more detailed information for many of these forecasts over the coming weeks, focusing on the different methodologies used to produce these numbers. Additionally, the forecasters will update their predictions as the campaign progresses, and we will, of course, continue to publish these as they are released.

While all 11 teams give forecasts for the Labour and Conservative parties, and most forecast Liberal Democrats, SNP, and UKIP seat shares, some of the models do not provide predictions for smaller parties. This explains the fact that the histograms do not always sum to 11. In the table below, “Others” constitutes the forecast tally of all parties not forecast by that team. Northern Ireland seats (18) excluded from all totals. Seats may not add up to 632 because of rounding error. 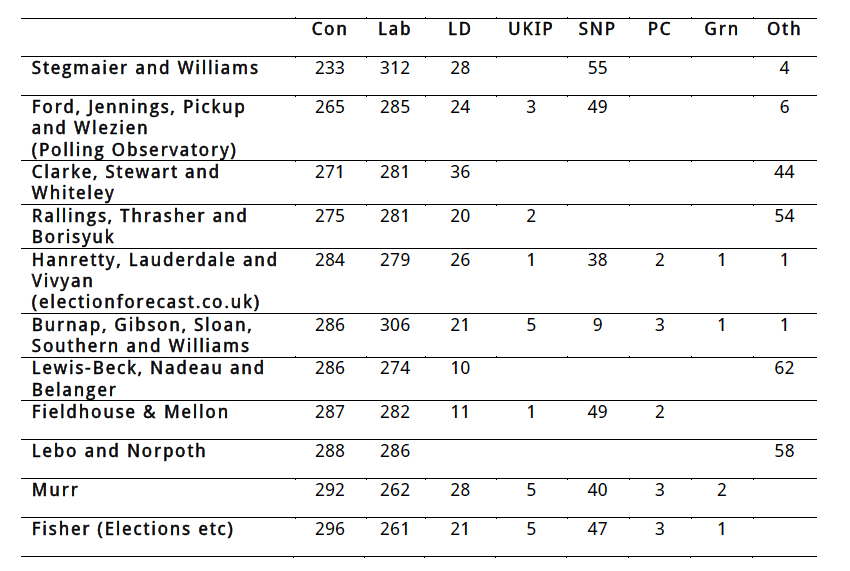