Simon Bastow looks at some of the issues behind politicised messages on managing the prison population over the years.
.
.
. 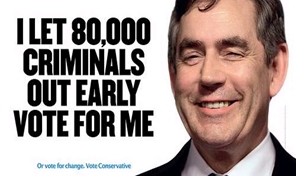 Voters should not be surprised in the run up to the election to find themselves subject to party political ploys to portray ‘shades of grey’ policy issues in easy-to-process black and white terms. Penal policy has been given the monochrome treatment in recent weeks on Conservative campaign billboards which mischievously feature the Prime Minister smiling (gleefully) against the slogan ‘I let 80,000 criminals out early. Vote for me’.

Ironically, for many liberally-minded folk who have watched the prison population double since 1993, the very idea of letting 80,000 prisoners out of the system may indeed sound like quite good one. Certainly, the prison reform lobby has been shouting increasingly loudly in recent years about the need for a more radical approaches to demand-side management of prison crowding. And today’s Liberal Democrat manifesto contains some striking commitments in this respect, specifically to introduce presumption against short term sentences of less than six months in favour of ‘rigourously enforced’ community sentences.

These more liberal aspirations aside, the idea of executive release as a device for managing prison capacity does present fundamental questions about integrity in sentencing and general confidence in the criminal justice system per se. The basic point being that if you are going to sentence people to prison, you should at least set up the system accordingly.

Early release mechanisms have arguably been a crucial part of sustaining balance in the penal system for years. Over the decades, sweeping changes in eligibility for parole have essentially boiled down to early release to reduce costs of running the system. Conservatives Home Secretaries have also not been averse to considering executive release as an option. Willie Whitelaw famously pushed for its use in the early 1980s, but was blocked by opposition from the judiciary, not to mention members of his own party.

It is true, as the poster suggests, that Labour has relied on a steady stream of early releases over the last few years to maintain the prison system at manageable levels of capacity (considered by prison officials to be somewhere around 2,000 free places). As Figure 1 shows, from the onset of capacity crisis into summer 2007, around 2,500 prisoners were discharged each month on an early release scheme known as End of Custody Licence (ECL) – release 18 days early of low risk and short term prisoners without any further supervision or monitoring.

Figure 1: The introduction of End of Custody Licence in response to prison capacity pressures 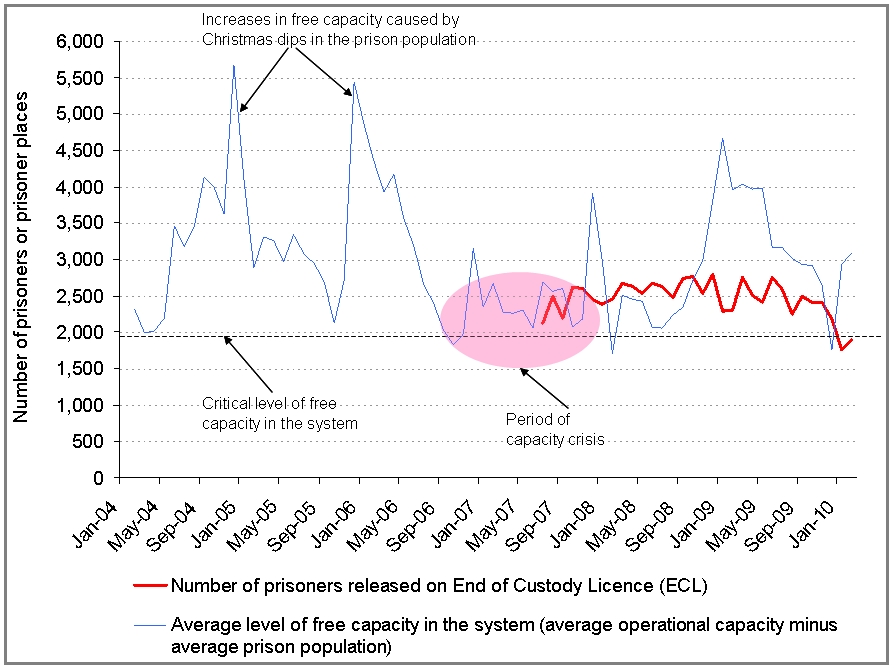 Introduced at a time where the slack in the system was getting close to this critical 2,000 mark (prison officials talk of the 2006 ‘Christmas population dip’ that never came!), ECL provided a vital release valve to adjust the system to allow it to retain balance. Resisted by Ministers in the years previous, ECL was announced as a temporary measure of last resort that would get the prison system across a serious capacity crisis.

Relatively few high profile cases of ECL failure surfaced, even under a beady eye of Tory analysts. Nevertheless, the decision to discontinue the scheme came with a collective sigh of relief according to Labour insiders. The announcement to scrap it as of March 2010 wiped the slate the clean for government, leaving the system to somehow absorb the equivalent of an extra 45,000 (or so) prisoner days per month. The beginnings of large new prison building programme will no doubt ease this transition.

It is important to see ECL in the context of some significant improvements in the prison system over the last fifteen years or so. For a start, a much tighter and centralised management grip on the prison population since the mid-1990s has brought about a stunning reduction in the use of police cells to accommodate prisoners (see Figure 2), and in the number of escapes since the mid 90s.

Figure 2: Signs of improvement in overall management of the prison population over the fifteen years 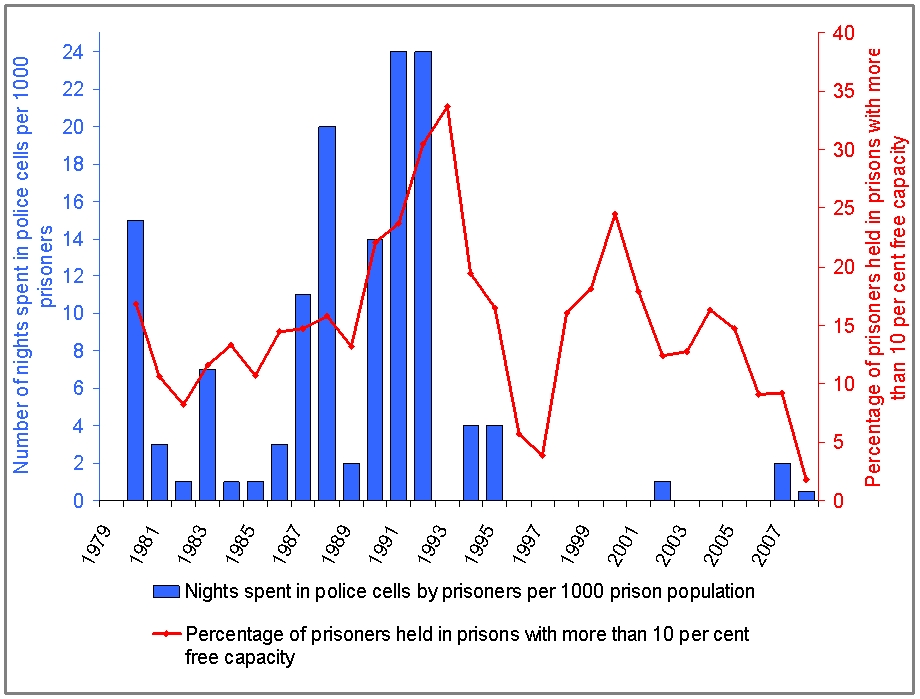 Secondly, the level of inefficient ‘slack’ in the system has reduced significantly from the early 2000s, a sign that as the prison population has increased, the system has been operating sustainably at much more efficient levels of capacity. The red line in Figure 2 above shows the average proportion of prisoners each years held in prisons with more than 10 per cent free capacity – a relatively reliable proxy for inefficient use of capacity.

Thirdly, it is almost undoubtedly true that since the early 1990s, standards of decency in prisons have improved considerably, not least by the introduction of the concept of operational limits on the number of prisoners which establishments hold. This has been accompanied by considerable hikes in spending on regime provision, programmes, education, and treatment available to prisoners.

Despite these improvements in the management of the prison system, a major question mark remains over the issue of reoffending. To what extent is the system set up to make significant inroads in this area, the annual public cost of which was estimated by government in 2002 at somewhere in the region of £11 billion.

Looking at the main political party manifestos in the recent days provides little clear vision as to how the system may address these issues over the next five years.

The current Labour position aims to provide 96,000 prison places by 2014, a peculiar contradiction of their own objectives in the aftermath of the 2003 and 2007 Carter Reviews to bring down the size of the prison population through more proactive demand-side management. And after seven years of the National Offender Management Service (NOMS), more integrated and innovative approaches to addressing reoffending are still at least partly compromised by constant pressures to keep the system ‘quiet’ capacity-wise.

The Conservatives meanwhile have pledged to end early release (which ironically, has already been ended by Labour). Whether this is a hostage to fortune in the current context of an ever-increasing prison population remains to be seen, but it is likely that the new government, Conservative or Labour-led, will continue with the current prison building plans, and this will save them having to face tricky questions on the use of early release.

It is interesting that the Conservative manifesto draws on a major piece of prisons research done by the Centre for Social Justice in Spring 2009, which advocates the breaking up of NOMS and establishment of Prison and Probation Trusts along the lines of NHS trusts. This would involve a radical shift from the centralised national system to much more localised and differentiated delivery structures – a broad theme consistent throughout the Conservative manifesto.

Tantalizing though this may be, even a thorough read of the Centre’s lengthy report raises a whole host of questions about how this may be done in reality, especially in an economic climate in which money will almost certainly be in short supply for a low priority sector such as prisons and probation. Not surprisingly, the Tory manifesto waves a vague hand towards this change by promising a ‘pilot scheme’ for a new Trust along these lines. Hardly a statement of radical intent!

More radical are the Liberal Democrats of course. They pledge to cancel the current building programme with the intention of developing non-custodial alternatives to compensate. In the case that there is hung parliament and the Lib Dems do find themselves in a strong bargaining position, it will be interesting to see how these age-old liberal penal priorities fare over the course of coalition negotiation.

Undoubtedly, improvements in management and conditions in prisons have taken place during the last fifteen years, and it is hard to find many people who would disagree with this point. But on the more more strategic issues of reforming the system to really cut into reoffending, the future looks less clear cut. Lack of money, a rising prison population, and a scaling back in the level of ambition are likely to be the defining factors of the next five years of the prison system in England and Wales.

In an earlier posting, Rob Reiner discussed the politicisation of policing. 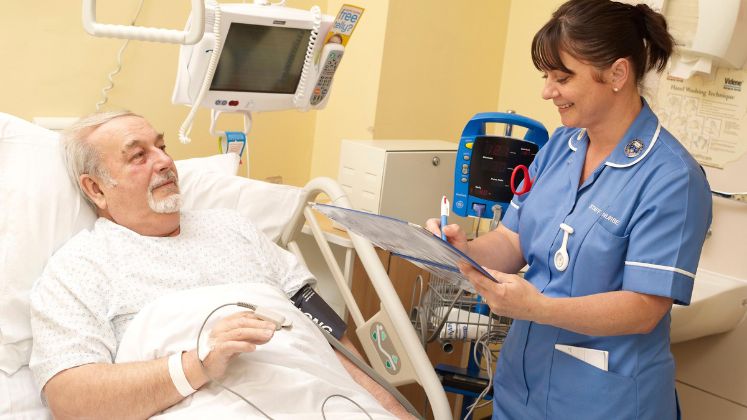