When governments design policies to reduce firms’ greenhouse gas emissions, are they too lenient on heavy polluters that claim such measures will damage their ability to compete in the global economy? Ralf Martin, Laure de Preux and Ulrich Wagner assess the UK’s experience with the climate change levy.

The idea that people who are responsible for creating a mess should be charged for its removal resonates with common perceptions of fairness. But in public policy-making, even before the financial crisis, there are many examples of this idea being turned on its head.

Climate change policy is one such area – a problem inherently linked to the realities of trying locally to regulate greenhouse gas emissions that are thoroughly global in their impact. Despite many efforts to coordinate policies across countries since the signing of the United Nations Framework Convention on Climate Change 20 years ago, climate change policy is still very much a localised affair.

So although some governments are trying to reduce emissions, they also worry about the possible negative effects of pollution legislation on the competitiveness of their countries or regions. In a globalised economy, such concerns are not unfounded as the dynamics of comparative advantage are conducive to shifting pollution-intensive production from regulated to unregulated regions.

Regulated firms also have every incentive to play up the risks to their competitiveness even if there is no basis for their claims. What’s worse is that governments have little to go by in evaluating such risks other than the assessments of the regulated firms themselves. And irrespective of any risks to firms’ ability to compete against their counterparts in less regulated places, it is the biggest emitters who have the biggest incentives and deepest pockets to lobby against any regulations.

Hence, it does not seem far-fetched to consider the hypothesis that risk-averse politicians are often unnecessarily timid in imposing climate change regulations and are likely to adopt a more lenient approach than would be desirable.

To examine this hypothesis, we have looked at the effects of the UK’s climate change levy, an energy tax introduced by the UK government in 2001 supposedly to give firms an incentive to reduce their energy consumption and thereby their greenhouse gas emissions. In parallel, motivated by concerns about competitiveness, the government granted a significant discount – initially 80% and later reduced to 65% – from the tax to a large number of industrial sectors whose competitiveness was presumed to be at risk.

But eligibility for the discount scheme was not based on an analysis of how exposed firms were to international competition. Rather – primarily for legal reasons – eligibility was given to firms with polluting processes that were regulated under legislation passed prior to 2001 known as ‘pollution prevention and control’ (PPC).

The fact that emitters of conventional pollutants are the ones benefiting from the tax discount might not have been a problem of course if there were a strong overlap between the PPC-regulated firms and those potentially threatened by international competition. That is a question that our research has been able to investigate.

On the basis of the survey, we constructed a number of firm-level scores. Figures 1 and 2 report statistics on scores that are indicative of whether a firm’s competitiveness is at risk due to climate change policies. 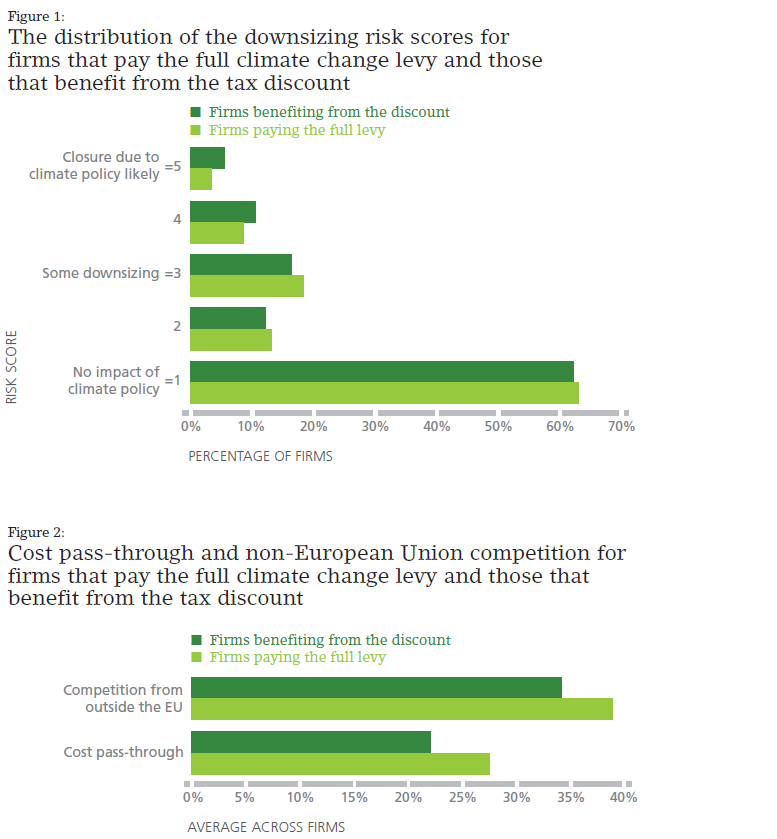 Figure 1 displays a score that is directly based on asking managers if they expect that their firms will downsize or indeed exit the UK (and Europe) due to climate change policies during the next 10 years. We see very little difference between firms that benefit from the tax discount compared with those that do not.

The same conclusion emerges when looking at the extent to which managers believe that they can pass on cost increases from the tax to customers in the form of higher prices (‘cost pass-through’) or when considering the share of foreign non- European Union competitors that a firm has (see Figure 2). If the competitiveness of firms eligible for the discount is at risk, we should see that they have lower cost pass through rates, a higher share of overseas competitors or both.

Hence, the government’s way of identifying firms whose competitiveness is at risk seems to be solidly off target. While this is deplorable from a policy point of view, it opens up a unique opportunity for researchers to examine if an energy tax such as the climate change levy has the negative impact that industry lobby groups claim.

Figure 1 indicates that roughly two in five managers report that climate change policy may have a negative impact on their firm to the extent that they expect to downsize or completely close down. But it is striking that these firms are fairly equally distributed between those that pay the full climate change levy and those that benefit from the tax discount.

A comparison of what happened to firms in the two categories following the 2001 introduction of the climate change levy should thus give us a good idea of the effects of such an energy tax. We turn to this next. 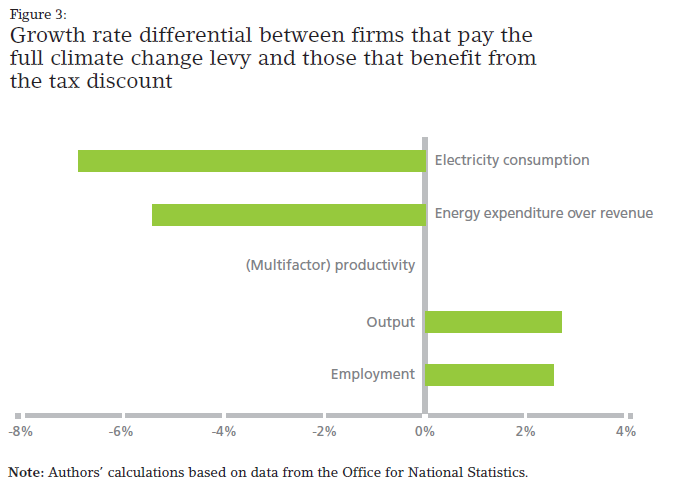 We also repeated this analysis for different sub-samples in our data, for example, focusing on more energy intensive firms, which might be expected to be more at risk. Again we find no evidence of negative effects on competiveness.

In contrast, we do find significant differences when looking at the growth rate of firms’ energy consumption, which is the target of a tax such as the climate change levy. Our results suggest that firms paying the levy in full reduce energy consumption at a rate more than 5% higher than firms benefiting from the discount (see Figure 3).

What are the implications of our results? First, there is no evidence that firms with the tax discount are facing higher risks to their competitiveness than firms that pay the full climate change levy. Moreover, we cannot find any evidence for negative effects on competitiveness. Not only does this suggest that the current system of granting discounts is badly targeted but also that there is no justification for the discount.

Second, firms that pay the full tax reduce their energy use and thereby their greenhouse gas emissions by more than beneficiaries from the discount. Thus, by granting discounts, the government is losing out twice: first, by missing out on tax revenues in the order of £350 million a year; and second, by achieving less in terms of reaching its targets on reducing emissions.

It would seem to be a no-brainer to abolish the discount and use the revenue in continuing efforts to plug the budget deficit. Alternatively, the extra revenue could be recycled back to firms via lower national insurance contributions, as has been the practice with much of the revenue from the climate change levy to date.

But the UK government has reached a different conclusion. Although the discount scheme was supposed to run out in April 2013, the government has recently decided to extend it until at least 2020. It is currently finalising the details of the legislation to bring it before parliament in September this year.

Laure de Preux is a research officer in CEP’s programmes on productivity and innovation and wellbeing.

Ulrich Wagner, an assistant professor at Carlos III University in Madrid, is a research associate in CEP’s productivity and innovation programme.