Chris Johnes argues that getting a job is not necessarily a route out of poverty. Rising costs and falling real wages means that having a job won’t necessarily allow you to make ends meet. What’s worse, the austerity programme is hitting low-income households disproportionately hardest. We must, therefore, rethink the prevailing attitude towards taxes and social justice.

As Europe remains stuck in a prolonged period of economic gloom, it is no longer surprising that many of us are getting poorer and are living more insecure lives. Indeed, in the UK we are, on average, getting poorer to a sufficient degree that the poverty line (based on average incomes) has fallen, apparently lifting some children out of poverty (but I suspect not many of them have noticed). At the same time, inequality is growing. Citizens on lower incomes are being hit twice as hard as services they need more than richer individuals are cut, and as tax rises – mainly VAT – hit them hardest.

What is starting to unravel, however, is the cosy consensus between the main political parties that getting a job offers a route out of poverty. We have seen a growing bank of evidence which is starting to show quite how fragile life is for those in low paid work. For those in low paid work with less predictable incomes (on zero-hours contracts, for example), it is even more precarious. 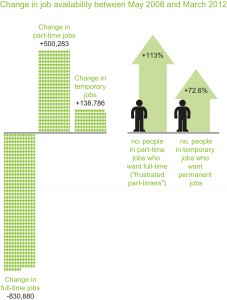 A combination of rising costs and falling (real) wages has pushed many people to a situation where one more “shock” – a broken boiler or cooker, a high car repair bill – can push them into debt, or into the increasingly common “heat or eat” dilemma. And a very large number of people in this position (60 per cent of those below the poverty line) live in households where at least one person is working. Many jobs today do not pay enough, and more and more part-time and temporary jobs replace permanent full-time jobs, which the kind that actually bring stable incomes. 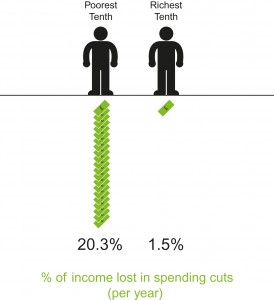 Cuts have not only hit direct benefit payments, but also many of the other services (such as childcare, youth clubs, advice services) that families on low incomes – working and not working – have relied on, adding to a further loss of income. 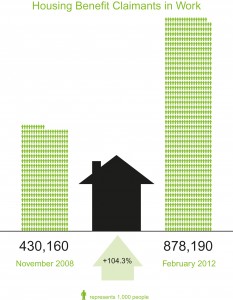 Simultaneously, the prices of essentials have been rising, especially food and fuel, and more and more working families have had to resort to claiming Housing Benefit, a step that is becoming less of an option as the Housing Benefit and, from April 2013, overall benefit caps kick in.

So, even if it is difficult to see how people can escape from poverty without working, it is also increasingly difficult to claim with any degree of understanding that work is the route out of poverty. Lots of jobs which are essential to our society and economy – and indeed to bigger business – need wider support. This is recognised to a degree by government (via Working Tax Credits, and from 2013 onwards Universal Credit), but also, to a degree, by the slowly growing number of (mainly large) employers who are looking to pay a Living Wage.

If life is getting tougher for those at the bottom of the income scale what’s going on elsewhere? 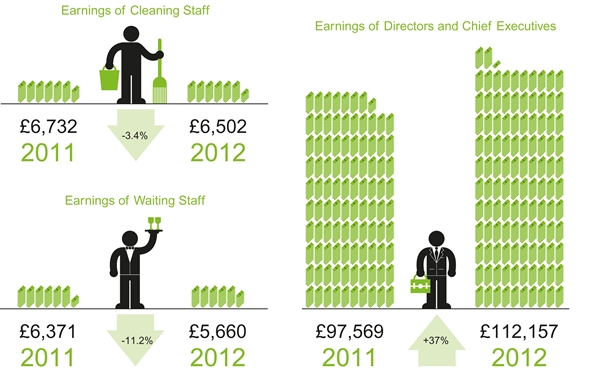 One of the most marked impacts of the economic downturn across most northern economies has been a growth in inequality. This is certainly true across the UK, where deficit reduction has been overwhelmingly managed by cuts in spending rather than tax rises – and the main tool of increased tax is a regressive one, VAT. So the economic downturn has hit those without work, and those working on low incomes hardest, and the government’s reaction to deficit management has reinforced that trend.

This is patently unjust: without over-emphasising the old (but still true) mantra that those who created the crisis are not paying for it, there is now wave after wave of problems hitting people on lower incomes, with the troubles faced by those in low-paid work becoming increasingly serious.

This is not healthy for them, or for the millions of children growing up in hard-working but highly stressed and struggling households. And it is definitely not healthy for our wider economic position, as millions of pounds of consumer spending are squeezed out of the economy, and as the gaps in society widen, throwing social cohesion out of the window.

We can, of course, change this. The UK remains the sixth wealthiest state on the planet. Yet political choices about tackling the deficit have added to wider economic woes. There are, undeniably, alternative ways to close the deficit, that don’t hit the poorest hardest, which is why Oxfam has recently released a report called “The Perfect Storm”, calling on the government to rethink their deficit reduction policies. 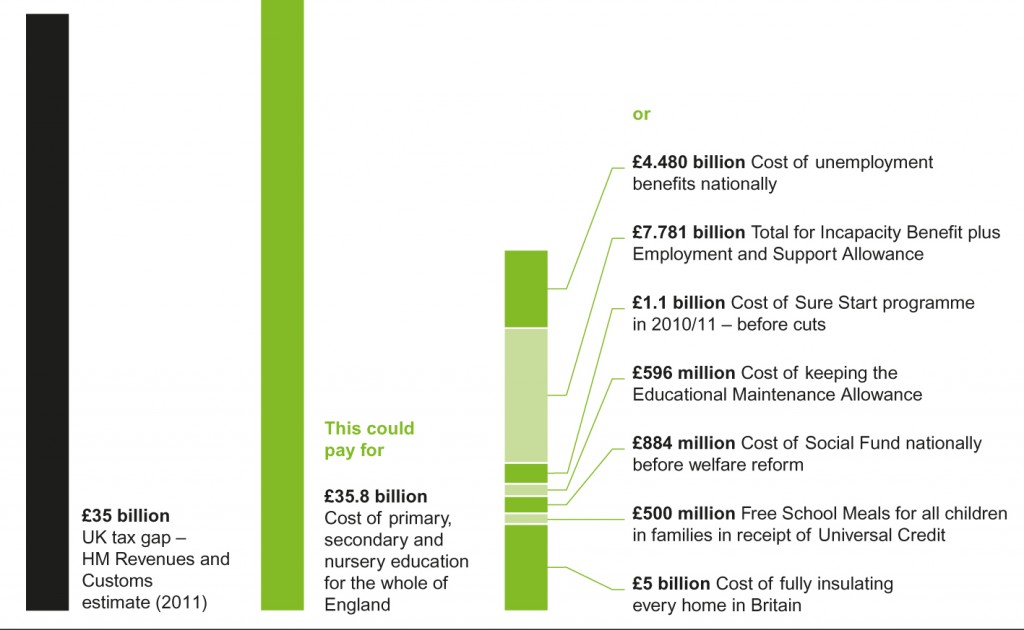 However, for this to happen, we need to re-think debates about tax. As long as tax remains taboo – and politicians who wish to fund progressive social programmes feel forced to conceal their intentions with so-called “stealth taxes” – the case for social justice remains woefully undersold. Instead we need to be more open about saying that a fairer society – and some degree of economic recovery – means fairer tax systems, and a more equitable way of tackling the deficit. And we can start by tackling with greater determination the widespread problem of tax avoidance, which is used mostly by the very wealthy to avoid their responsibilities, and is fundamentally undermining government finances, and thus the welfare of very many of our fellow citizens.

Chris Johnes is the Director for UK Poverty at Oxfam.