The coalition government is pressing ahead with the privatisation of the probation service in England and Wales in the hope of reducing re-offending rates despite serious concerns about the scale, pace and complexity of the changes. Noting the hitherto tepid political response, Rob Allen examines how the reforms are progressing and what they mean in practice, arguing that the validity of the MoJ’s expectations should have been subjected to much more testing than it has been.

The end of June saw the deadline for bids to be submitted to the Ministry of Justice to run the 21 Community Rehabilitation Companies (CRC’s) which are taking over most of the work of the probation service in England and Wales. The contracts are due to be let in the autumn and it will be next year before shares are sold and the private sector providers start to be paid according to the extent that they reduce re-offending by those they supervise. So far however, despite myriad concerns about the scale, complexity and pace of the changes, the ‘Transforming Rehabilitation‘ revolution appears to be broadly on schedule. It is worth taking stock of its prospects for success.

In the four weeks since probation service’s dual structure was put in place – a national public service which advises courts and monitors high risk offenders and the CRC’s that do the rest of the work – there have been complaints  that staff numbers have not been allocated correctly, that information is not being properly shared and that morale is rock bottom. It remains to be seen whether these count as the teething problems, which Justice Secretary Chris Grayling admits are inevitable, or symptoms of a more serious and even progressive malaise.

Unsurprisingly most probation staff, particularly those who have moved to the CRC’s are unimpressed by the changes. However, two days of industrial action by the National Association of Probation Officers barely registered with the public, relatively few of whom come into contact with the service. Unlike changes to the health service and schools, there is seldom a “what does it mean for me?” question. Perhaps because probation staff are less well connected than lawyers, the reforms have provoked less controversy than proposed changes to legal aid.

At the political level, Labour’s initial criticisms were timid, aware that it was they when in government that had legislated to open up the market for probation services, thereby sparing Grayling the need to bring detailed proposals to parliament. Labour – like the coalition until Grayling’s arrival at the Ministry of Justice – envisaged the more diverse range of providers to be commissioned at a local level not in Whitehall. Shadow Justice Secretary Sadiq Khan has become more and more hostile decrying a grotesque manifestation of this triumph of ideology over evidence. The Lib Dems do not seem, thus far, to have considered the changes worth having a row about. 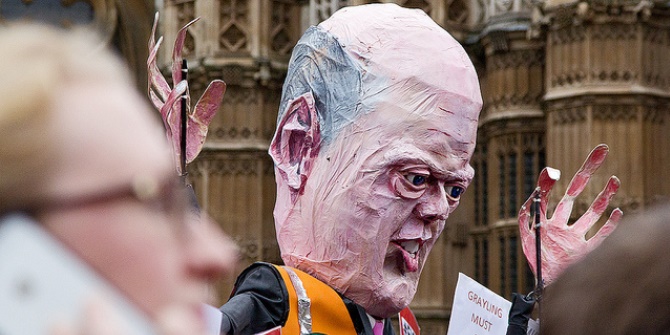 Both the Justice and Public Accounts Committees in parliament have drawn attention to the risks inherent in Grayling’s plans – that contracts will not be managed properly, that performance will decline in the transition to the new system and that the market might fail to deliver to the required standard. The government’s response has been to claim there is a risk in the status quo.

The probation reforms have been cleverly linked to another policy change that has much more widespread support; the extension of supervision to short term prisoners on their return to the community. The savings from privatisation are not being used to meet austerity targets but to fill an acknowledged gap – one which Labour tried to fill through a proposed new sentence of custody plus but were never able to find the resources to implement. Before the 2010 election, the Conservatives envisaged, instead of statutory supervision for this group, a large expansion in the ‘helping hand’ support services provided by resettlement charities.

Promising this support to vulnerable prisoners, albeit in the harder edged form of breachable requirements, has taken the sting from some of the criticism of the probation reforms. But it may yet prove to be their undoing. The basic bottom line question of whether the savings they produce will be sufficient to supervise an additional 50,000 people a year has yet to be answered.

The Justice Committee wanted to examine the affordability of the reforms last year, but were unable to determine whether sufficient funding is in place on the limited information that the government provided. By the time the Public Accounts Committee looked at the reforms in the spring, the government were in the midst of bidding negotiations which restricted the information they could make public. Commercial confidentiality was the reason that the government’s own Major Project Authority did not scrutinise the programme.

The MoJ told the PAC that they expect service provision to be totally different having opened up the market to a more diverse range of providers. The validity of such expectations should really have been subjected to much more testing than it has been. The privatisation of prisons was expected to produce innovation and economy and has in large part produced neither. Privately run Oakwood prison has been quoted by the government as a model of what can be achieved at much lower cost but the evidence about its ability to meet basic standards is increasingly disturbing.

It is not too late for the Lib Dems to wake up to the level of risk in these reforms and the threats that they pose – both to the effective local inter-agency partnerships, which they have traditionally considered essential to successful rehabilitation, and to their own reputation. Given the uncertainty, genuinely held concerns and lively debate around the reforms, there is a strong case for a pause.

The Lib Dems could flex their coalition partner muscles and insist that the wholesale changes to the probation system are slowed down and piloted. Without the kind of delay and assessment which they inserted into the NHS reforms, future generations may wonder how they came to be party to what many consider the destruction of a 100 year old public service.

Note: This article gives the views of the authors, and not the position of the British Politics and Policy blog, nor of the London School of Economics. Please read our comments policy before posting. Image credit: Chris Beckett, CC BY-NC-ND 2.0

Rob Allen is a researcher and consultant on criminal justice and prisons, co-founder of Justice and Prisons, working in UK and abroad. From 2005 to 2010 he was director of the International Centre for Prison Studies (ICPS) at King’s College London, undertaking research on imprisonment and assisting prison systems to comply with international standards. He blogs at Reforming Prisons and tweets from @robroballen

The royal wedding reminds us that hereditary principle is alive and well in the UK: property rights and control over land remain firmly with royals and the aristocracy