Researchers from Warwick University and Birkbeck College have been tracking the views and experiences of UK public service employees over the last year as they cope with the changes in their organisations, initially signalled in the Comprehensive Spending Review (CSR) of October 2010.  Tina Kiefer suggests that after the CSR, public sector employees have been more pessimistic about the impact of change on their work and reported lower levels of emotional well-being, and less favourable attitudes towards leadership and the organisation they work for.

While central and local  government and other public services have to keep a tight focus on the financial impacts of the CSR, our research focuses on the experienced effects of budget cuts on employees as their organisations engage in substantial and often multiple restructuring and redesign in order to achieve the government’s financial targets.  Employees’ wellbeing, attitudes and performance play a crucial role not only in the delivery of services but also in achieving these budget cuts, so we examined whether the changes have affected employee well-being, attitudes to work and public service, and behaviours.

We surveyed respondents at all levels from a range of public sector organisations such as local and national government, health, and police, at the time of, and twice (in April and November 2011) after the CSR. They reported a diverse range of reactions and professional experiences related to the CSR. While we cannot know with absolute certainty that the CSR was solely responsible for the effects on employee’s experience of change, it was possible to compare participants who completed the survey before the CSR announcement with those who completed it after.

Overall, employees in the public and third sectors reported that they experienced a variety of organisational changes as well as innovations. Participants were particularly likely to report: a recruitment freeze (62 per cent); cutbacks in revenue (50 per cent); and new ways of organising systems and processes (43 per cent). Six months later, the overall extent of change increased significantly; in particular, participants reported more voluntary and compulsory redundancies, further cutbacks in service provision, and an increase of mergers of teams or service areas. However, the level of innovative behaviours (behaviours focused on facilitating innovation in organisations) remained the same.

Much previous research has shown that radical and continuous organisational change can cause employees to experience negative emotions and these public sector employees prove to be no different: High levels of reported change was associated with high levels of negative emotional experiences, which in turn were associated with a wide range of dysfunctional outcomes, such as lower levels of health, well-being, trust in the organisation, justice, loyalty and perceived organisational support. Employees also reported higher levels of violations of their ‘psychological contract’. The preliminary analysis of the second and third surveys indicates that many of these negative outcomes became worse over the subsequent year, particularly if initial reported levels of change were high.

Employees anticipation that changes following the CSR would affect their jobs

In the first survey participants were asked whether they anticipated that the upcoming organisational changes would improve or worsen eight different features of their job (see Figure 1). In the second and third survey, participants were asked to look back on the previous six months, and to indicate whether each of the eight aspects of their job had improved or worsened as a consequence of organisational changes.  The scale ranges from +3 (maximum improvement) to -3 (maximum deterioration). However, on average, no group reported an improvement of any feature, with the highest score being just under zero (zero means neither getting better or worse).

Figure 1:  Anticipated and experienced impact of change on eight features of the job. The scale ranges from +3 (“very much improved”) to -3 (“very much worsened”), with 0 indicating “neither improved nor worsened”). 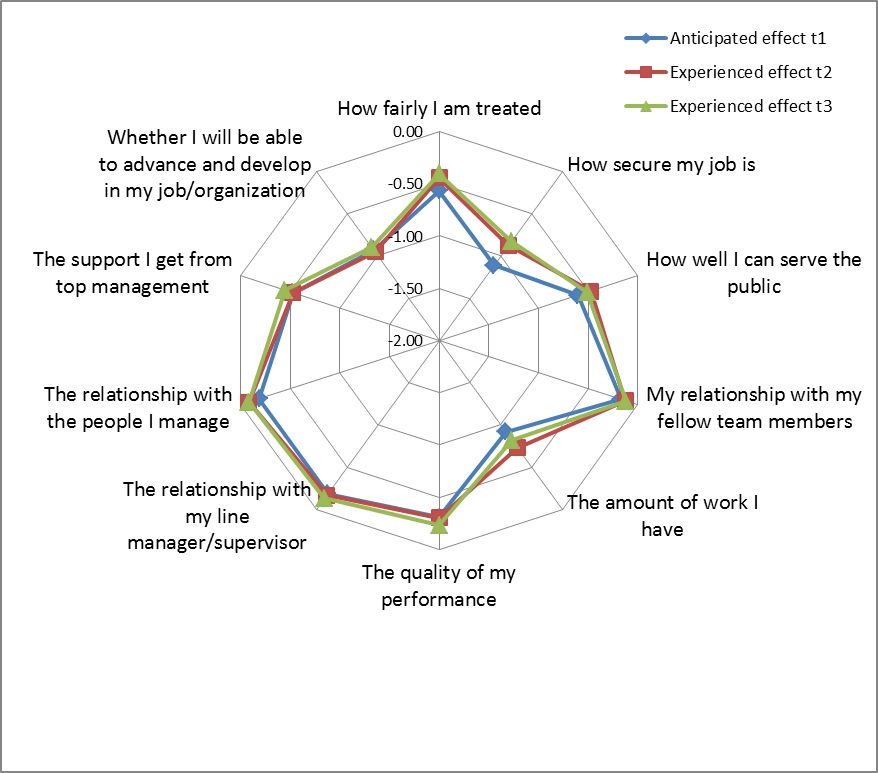 In general, and across all hierarchical levels, participants expected the upcoming changes to make all aspects of their jobs worse (see blue line, below the neutral line of 0 in figure 1).  Most notable here was job security, promotion opportunities and workload.

Six months (indicated by the red line) later participants indicated that on average the changes to their jobs were somewhat less negative than anticipated. In particular, work load and job security turned out to have got slightly less worse than anticipated. It should be noted, however, that the general perception remains that things have got worse.

A year after the CSR, people report more or less the same view as they did six months earlier (green line). Participants perceived that the organisational changes had a negative effect on how well they are able to serve the public – a view that remained constant over the year. The average response to these eight questions about job features was found to be very good predictor of wellbeing and attitudes towards the organisation over time.

Not all change effected employees negatively

Nearly all the organisational changes measured were related to negative outcomes, particularly where aggregated. However, interestingly, we also found that although change increases negative emotional experiences at work, it did not affect people’s positive experiences.

There was a negative impact on the perceptions of change, but innovation remained unaffected

Our results suggest that the CSR announcement in October 2010 had a significant negative impact on employees’ perceptions of change, attitudes towards the organisation and wellbeing, despite the fact that no actual changes had yet taken place when the first survey was conducted. Results of the follow-up surveys indicate that the extent of change had significantly increased for both groups. It is further becoming clear that the negative impact of change at the time of the third survey wave, i.e.  Autumn 2011, continues to affect individuals and organisations despite the fact that the experience turned out to be less negative on average than participants anticipated.

And while the extent of change has increased, the good news is that innovative behaviours such as partnership working or working with citizens were unaffected and did not decrease as change increased. The more people reported innovative behaviours at work, the more positive are their experiences of working in these organisations during radical and on-going change.

This research has been conducted by Tina Kiefer and Jean Hartley and Amanda Rosewarne (University of Warwick), Neil Conway (Birkbeck College) and Rob Briner (University of Bath). You can find more information and the report of the first survey online here.

The political and economic crisis in Europe has meant a step back for the EU’s major institutions. Solutions in 2012 must not come at the expense of democracy.