The downward trend in road deaths seen in recent years should not be taken for granted. Neil Greig argues that road safety is at risk if we ignore the efficacy of targets and the lack of funding in some local authorities.

The Institute of Advanced Motorists (IAM) recently gave evidence to Louise Ellman’s House of Commons Transport Select Committee Inquiry into road safety.  “Why bother?” I hear you ask. Britain’s roads have never been safer and deaths and injuries are at an all-time low. There follows a simple response: five people are still killed on our roads everyday so much more needs to be done. The more complex response is that the road safety fraternity is far from impressed by the current governments approach to road safety.

Central government’s adverse reaction to ‘targets’ has infected a topic area that has actually proven successful.  Like many others in road safety, we made the point clearly to the Select Committee that we would like targets to be reinstated on both a regional and national level.  For the last two decades, casualty targets have delivered joined up working, successful partnerships and of course, record falls in road deaths against a backdrop of ever-increasing traffic.  In the view of the IAM, these centrally generated targets and obvious government commitment have been instrumental in making the UK number one in the road safety charts.

Some of the wider criticisms directed at local performance targets do not necessarily apply to road safety. The Strategic Framework for Road Safety describes central targets as ‘constraining local ambition’; whereas the IAM believes that rather than stifling innovation, targets around casualty numbers created clear objectives, which proved to be achievable. Under the previous framework highways authorities were still able to implement their own ideas and innovative ways of working to achieve safer roads.

Ironically, as part of the United Nations Decade for Road Safety the rest of the world are now urged to adopt targets as a key driver for change.  The EU and the Scottish Government have stuck by targets for their strategies through to 2020.

The other major concern for us is the undue impact of public spending cuts on road safety work at the local authority level.  The IAM has conducted a quick survey of local authority past and future spending plans and it does look as if the road safety spending line has taken a greater hit than other spending areas (Table 1.1).  Factor in the localism agenda, police service cuts as well as decentralisation of budgets, and a perception that road safety is no longer a national priority, and we could have a perfect storm for road safety practitioners at the local level. 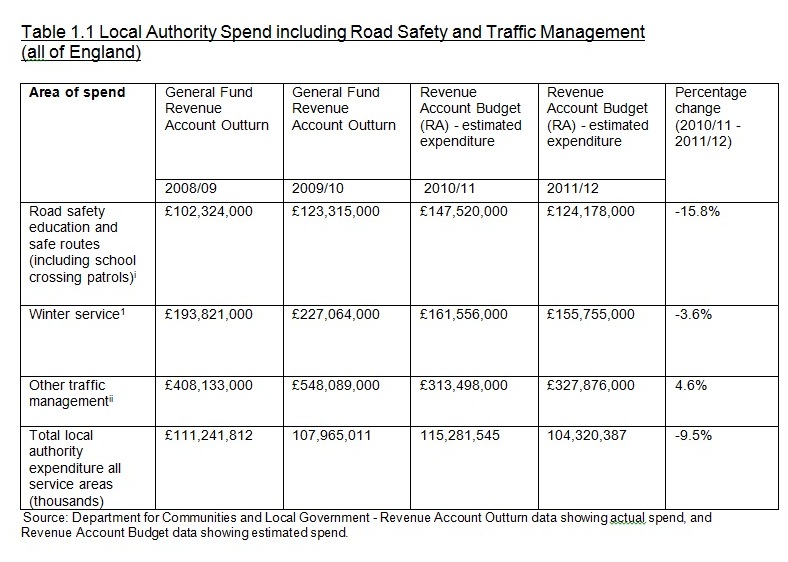 The Road Safety Minister Mike Penning, will argue that his new strategy does contain an outcomes framework showing where the Department for Transport think road casualties should be in the future.  What is not clear however is how poorly performing councils will be helped or highlighted to ensure they catch up with the rest.  There are disparities in road safety between regions; Table 1.2 illustrates how significant these can be. A simple target for government could be to ensure all regions are in line with the North East by 2020!

The good news in the new Road Safety Framework is a clear commitment to help drivers improve whilst clamping down on those who deliberately flaunt the law.  The IAM has supported such an approach for years.  In our view the existing driving test does not equip young people for the real world dangers they will face on rural roads, at night or with peer group passengers.  It is also nonsensical that once drivers pass the test they are handed to keys and left to learn by their mistakes in the high risk first six to twelve months of solo driving.  Mike Penning has been making positive noises about post test training and we are working with the Dft to implement new ideas.  The main stumbling block is that the insurance industry fails to recognise the value of post test training and struggles to offer decent reduced premiums as an incentive to those who engage in continuous learning behind the wheel.

The preliminary casualty figures for the first three quarters of 2011 are out this week and already we are seeing a rise in deaths, particularly among cyclists.  There may be ‘blip’ factors such as the very bad winter last year, which reduced traffic and injuries, but it is clear we cannot afford to simply assume that deaths will continue their downward trend.  As the death figures get lower making further inroads becomes more and more difficult and demands stronger leadership and focus from central government to ensure everyone plays their part.