There are those who argue that progressive politics is doomed because the powerful forces of the market and technology are inevitably leading us to a more unequal society. The opposite is the case, writes Alan Manning.

The changes in technology we are seeing mean that we need progressive politics more than ever. We need it to ensure that technology results in real economic growth and that the benefits of this growth are shared fairly. Since at least the start of the Industrial Revolution, technological change has always changed the demand for different sorts of labour to the advantage of some workers and the disadvantage of others. In recent years the dominant trend has been that of job polarisation or hollowing-out in which there has been rapid growth in the employment share of high-wage occupations, for example managers and professionals, more modest but still positive growth in the employment share of low-wage occupations, for instance shop assistants and care assistants, and falls in the employment share of jobs in the middle of the distribution such as clerical and many manufacturing jobs.

The most plausible explanation for these changes is that machines, computers and robots are displacing human labour in jobs where the instructions can be written in computer code. 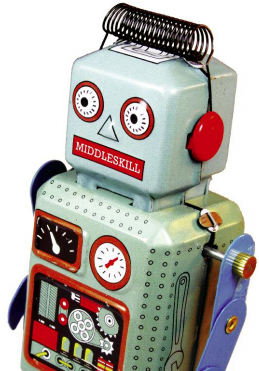 1. The rise of the robots

Changes to employment structures seem to be occurring in all the advanced economies and – to date – show no sign of stopping. And, with continual improvement in the performance of computers there is no reason to think that it will stop. This has encouraged a vigorous debate on the current and future consequences of these changes – sometimes it seems that the fastest growth in employment has been among those writing about robots. There is an active debate whether we are at the start of a period of unprecedented technical change based on computers extending into many areas (Brynjolfsson and McAfee’s book ‘The Second Machine Age’ being a prime example) or entering a period of stagnation (as Robert Gordon has argued).

And if there is rapid change there is an equally active debate about the consequences. Some extrapolate current trends in job polarisation into the indefinite future and foresee a society in which larger and larger swathes of human labour are replaced by machines and the only human labour required are the services of a small elite who are needed to design these machines (and perhaps eventually even these are unnecessary). In this vision most humans will go the way of horses who were once, literally, the workhorses of the economy but whose costs to rear and feed rose above those of machines that did the same work such that the horses ended up surplus to requirements.

2. Inequality and the space for progressive politics

In all of this discussion the critical role played by inequality is often under-played. Some ask ‘what will we do with ourselves when there are no jobs because the machines are so much better and cheaper than people?’. This is a bit like asking ‘what do British aristocrats do when all the jobs are done by servants?’. The answer is that they do what they want. But, of course, the gentry have the economic resources to pay servants to do the work so the important question is ‘who owns the machines?’. We cannot rely on the economics of the market interacting with technological progress to deliver inclusive growth and a fair distribution of wealth – there is no reason to believe in any automatic mechanism to make sure that it does. Making sure that growth is inclusive is the job of the political process, and of progressive politics in particular as that is motivated primarily by the underlying belief that the distribution of rewards is unfair.

And this is why these changes present opportunities as well as challenges for progressive politics. There are those who argue that progressive politics is doomed because the powerful forces of the market and technology are inevitably leading us to a more unequal society (Tyler Cowen’s ‘Average Is Over’ being a good example). The opposite is the case – we need progressive politics more than ever in such a situation to ensure that the benefits of growth are fairly shared. Building a fairer society may be harder but that simply makes it even more important to try.

We need to do more to remedy inequalities in our education system to ensure that it is a fair opportunity for all and that parental wealth and privilege cannot buy advantage. And we need to make sure that people have the skills to take advantage of change. We will also probably need at some point to take on vested interests e.g. in the professions that have done so well in recent years. Technology may well undermine the mystique of expertise that surrounds so many workers in the professions whether medical, legal, educational and financial. But, even as their positions will be threatened by computerisation, there will be a big fight to protect entrenched privileges and the professions are probably the best-organised workers in today’s labour market.

We will need to regulate financial markets to make sure that the earnings of those in that sector really do reflect benefits to the wider society. And I think we will need to do more redistributive taxation; to tax the largest incomes more heavily than we do now. So large has been the increase in the share of income going to the top 1% that taxing them more heavily only takes them back to the level of earnings they had a few short years ago – it is simply not credible that slightly higher taxes will drastically reduce work effort among high-earners.

4. Progressive politics is needed to save capitalism from itself

Technological change – almost by definition – allows us to do everything we could in the past and more, so it should make us better-off. We can use these new-found abilities to harm people (think of ever-more destructive weapons), to engage in metaphorical arms races for control over limited resources (think of the tiny advantage some new trading algorithm might give a trader), or we can use them to make us all better off. We need to make sure the latter is the course we follow.

So those on the progressive side of politics should not be apologetic about their beliefs in a fair society and the policies needed to move us in that direction. If there is no benefit from growth for the median voter then they can hardly be expected to vote for growth-friendly policies and the likelihood is that, eventually, they won’t. So progressive politics is needed – as is often said – to save capitalism from itself.

Note:  This article appeared originally on the Policy Network site and is a contribution to the “Making Progressive Politics Work” publication which will inform theProgressive Governance Conference taking place in Amsterdam on 24/25 April, 2014. It gives the views of the author, and not the position of the British Politics and Policy blog, nor of the London School of Economics. Please read our comments policy before posting. Home page image credit: Steve Jurvetson.

Alan Manning is Professor of labour economics at the London School of Economics. 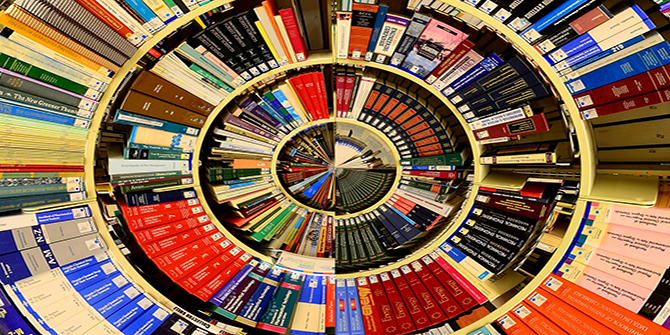