Eliminating the number of safe seats and making MPs work harder for their constituents has been at the root of calls for reform of the electoral system in the UK. However, in a new piece of research, Fabian Richter argues that only fifteen per cent of the population live in safe seats and this number has been in steady decline over the last thirty years as smaller parties have taken a greater share of the vote, and voter loyalty to political parties in general has decreased. This argument calls into question some of the underlying assumptions of the campaign for electoral reform and casts new light on the efficiency of the First Part the Post model.

As a candidate for Parliament in Bath at the last general election, I took part in numerous hustings and panel discussions. As these were attended by many Liberal Democrat activists, the topic of electoral reform was invariably brought up at some point during the debate. Equally invariably, the questioner made the assertion that “under the current system, elections get decided by a tiny minority of the population, and most votes are wasted in safe seats.” On television, Nick Clegg was proffering a similar line, stating boldly that “millions feel that their votes don’t count at all.”

At the time, I didn’t have the opportunity to check the facts, but it always struck me as a rather sweeping generalisation. I have now discovered that, remarkably, no-one has properly looked at this issue before – and when you do, you discover this assertion about safe seats simply isn’t true.

That is an important discovery, since it strikes at the core of the pro-reform argument. If people’s votes do count under our current First-Past-The-Post (FPTP) electoral system, then why change it? So, what are the facts?

It is certainly true that there were a large number of safe seats when the campaign for electoral reform first gained prominence and the SDP was created some 30 years’ ago. My own research has found that in 1979 only a quarter of constituencies could then be described as marginal.

Since then, we have seen a realignment of the centre-left in British politics leading to a resurgent Liberal party. We have also seen the emergence of regional parties in the shape of the SNP and Plaid Cymru. And we have seen a dramatic weakening of voter identification with any particular political party. Academic research has measured a near halving in the strength of voter identification with Labour and the Conservatives between 1964 and 2001.

The effect of all these trends has been a significant increase in the number of marginal seats as voting patterns become more fluid. More than one in three seats now has a majority of less than 5,000, making them truly marginal (see Figure 1). And while a quarter of all seats had a majority of 15,000 or more in 1979 (making them almost impossible to capture by another party in one single election), this proportion had fallen to just 15% of constituencies at the 2010 general election. 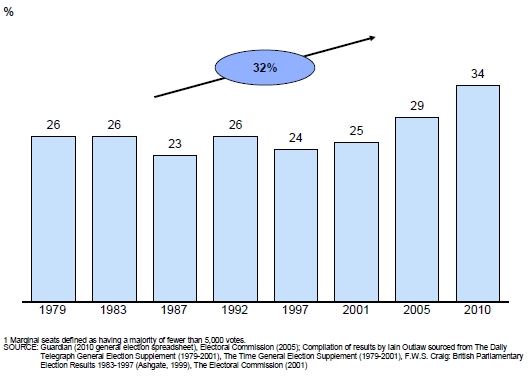 That means 85% of constituencies representing approximately 39 million voters in the U.K. today are either highly marginal or give voters at least a reasonable chance of changing their Member of Parliament at the next election. What is more, over time even some of the safest seats in the country change hands. A detailed analysis of every election result over the past 30 years shows that five of the twenty safest seats in 1979 have since been captured by another party. Some of these seats had majorities of over 35,000 votes in 1979, proving that even electoral fortresses can crumble.

Figure 2: A quarter of the safest* seats in 1979 have changed hands since 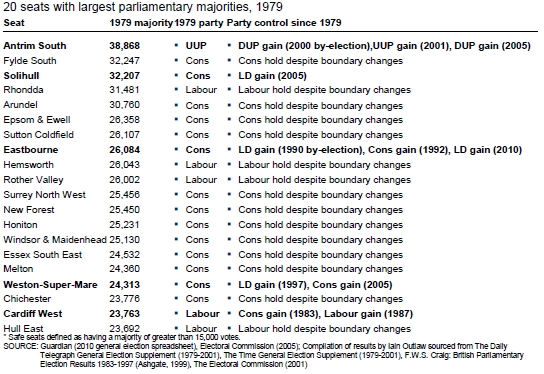 As we move closer to the referendum on electoral reform in May, it is important that the debate about the pros and cons of changing our voting system is informed by hard facts, not emotion. My research provides the facts to refute the central claim made by advocates of electoral reform: that our current voting system wastes most people’s vote because nearly everyone lives in a safe seat. This was a gross exaggeration even 30 years ago, but today only 15% of the population live in truly safe seats – rendering the main argument of reformers to look as dated and sun-bleached as an old SDP rosette.

Tactical voting can still occur under the Alternative Vote, and it may lead to unexpected outcomes 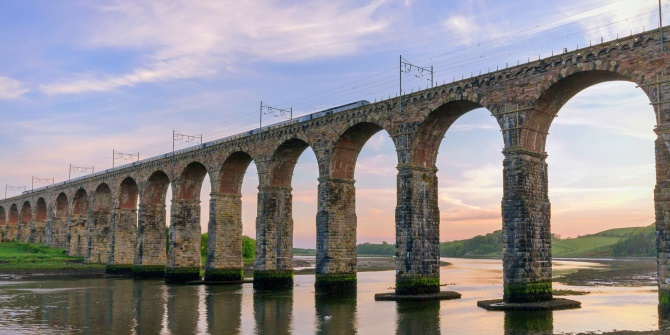