Child poverty in the UK is not unique to times of recession or austerity, but may be made worse by expected job losses, inflation and increases in VAT. Gareth Jenkins of Save the Children UK discusses new research which finds that in some areas of high deprivation there are as many as one in four children in severe poverty, and that government must do more to tackle worklessness and increase financial support to families in desperate need.

Each year Save the Children publishes its research into child poverty rates in the UK. The latest research findings, reveal that 1.6million children across the UK live in severe poverty. While last year attention focused on Labour’s boom years which saw the number of children living in the most extreme poverty actually rising, this year there was a small drop in the numbers; but essentially it is a continuing story of an unacceptably high number of our children living in deep deprivation. Moreover, with increasing job losses in the poorest parts of the country and welfare cuts to come, deep poverty levels are likely to rise sharply from 2012

At 14 per cent, the proportion of children in severe poverty was highest in Wales, compared to 13 per cent in England and 9 per cent in Scotland and Northern Ireland. Within the English regions, Figure 1 shows that the risk of severe poverty was the highest amongst children living in London, at about 18 per cent, followed by the West Midlands at 16 per cent and the North West at 15 per cent. 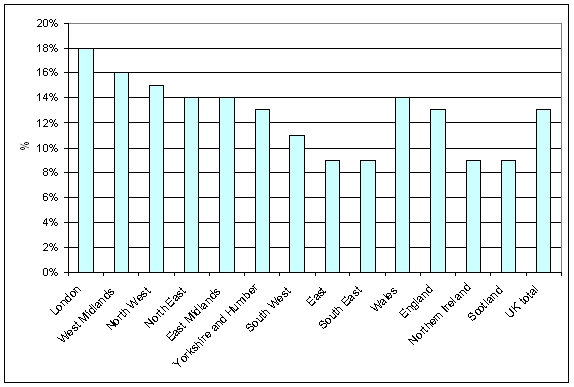 Our definition of severe poverty is defined by a household with an income of below 50 per cent of the median (after housing costs), and where both adults and children lack at least one basic necessity, and either adults or children (under the age of 14) or both groups lack at least two basic necessities. On average families in severe poverty are getting by on less than £134 per week for a lone parent with one child and less than £240 per week for a couple with two children.

For the first time we have developed estimates at local authority level of severe child poverty, which revealed that 29 local authorities in the Great Britain have more than one in five children living in severe poverty; Figure 2 shows the most afflicted areas. 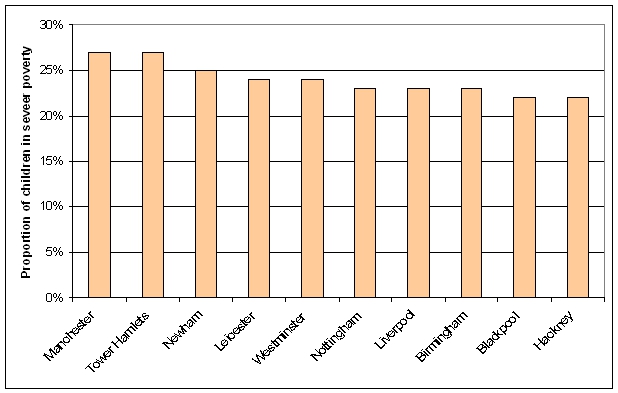 Children in severe poverty are missing out on things like school trips and hobbies, which hinders their educational and social development and leaves them excluded from society. Parents in severe poverty are managing very tight budgets and don’t have enough money for things like household contents insurance, repairing a broken refrigerator or washing machine, or saving just a small amount each month in case of emergencies or for a birthday present.

Public sector job losses, changes to benefits and increases in VAT and inflation risk further increasing severe child poverty, especially in those areas with high levels of deprivation. Small increases in child tax credits announced in the June 2010 budget and the subsequent Comprehensive Spending Review may go some way to minimising the impact of unemployment and welfare cuts on severe poverty in the years 2011 and 2012 but are unlikely to be enough for many families.

The impact of the recession has been geographically uneven and it is likely that future economic growth, job losses and public spending cuts will also be distributed unevenly. These fears are backed up by research by the Work Foundation which found that:

Government has recognised that certain areas face challenging job markets and have instigated measures which are intended to support economic and employment development at the local level. However, there are concerns that government policy in this area is not focused on providing targeted and specific support to areas of high deprivation and poverty. According to the Centre for Local Economic Strategies, the competitive processes involved in initiatives such as Local Enterprise Partnerships and the Regional Growth Fund may actually put areas with weak labour markets and underdeveloped private sectors at a comparative disadvantage and are not a replacement for targeted economic development initiatives such as Grants for Business Investment.

Yet despite the deficit and spending cuts, the government can ensure no child grows up in severe child poverty if it has the political will to do so. A plan of action should, therefore, include:

Welfare reform alone will not be enough to support parents into decent, sustainable jobs if there are no jobs available. Our analysis shows that areas of high severe child poverty face major labour market challenges. So far the government’s growth plans haven’t focussed enough on targeted, spatial approaches to economic and labour market development.

The following Table shows that the areas with the highest areas of severe poverty have suffered from higher levels of unemployment growth than those with lowest levels of child poverty. In addition, people looking for work in those areas are competing with a higher number of people for vacancies based on Jobseekers Allowance claimants per vacancy. It also appears that local areas with high levels of severe child poverty face greater job losses because they tend to have greater reliance on public sector jobs.

Table: Average labour market statistics for the ten local authority areas with the highest and lowest estimates of severe child poverty in England

It is vital that the government ensures that jobs created as the economy recovers are available to people in areas of high severe poverty and unemployment. Funding for economic development and labour market support through the Regional Growth Fund and Business Growth Fund needs to be earmarked for areas of high deprivation and linked to job creation targets within those localities.

As most children living in severe poverty are in workless households, priority should be given to removing barriers to employment for parents living in poverty. We recognise that the government intends to replace the current working tax credit and benefits system with a new universal credit but the implementation of this is some way off and parents need labour market support now. Key measures include:

Improve the financial support provided to families in desperate need

A Focus on Child Poverty

The government-commissioned Independent Review on Poverty and Life Chances recommended that government policy focus on severe poverty, recognising the importance of “ensuring that children do not experience severe financial and material poverty while they are growing up”.

The government should implement this recommendation by adopting Save the Children’s measure of severe poverty and setting a target to eradicate severe child poverty (5 per cent or less) by 2016 as part of a pathway to child poverty eradication by 2020. This will help ensure that policy is designed to benefit those children experiencing the most intense and severe poverty.