In light of the resignation of Michael Fallon, and the various other allegations that have emerged about public figures, Jennifer Brown looks at the evidence and discusses why sexual harassment seems to be a perpetual feature of our culture.

Sir Michael Fallon was the first Parliamentarian to fall on his sword in the wake of the emerging sexual harassment scandal currently besetting British political life. In his resignation letter he explains that his behaviour had “fallen below the high standards that we require of the armed forces.” We do not know what the frequency of sexually harassing behaviours occurring within the Palace of Westminster is, but Sir Michael aspiring to the military standard of occurrence is troubling.

Opportunity Now found the military as the highest offending work sector in terms of sexual harassment across all the occupational groups they surveyed. A recent survey of such harassment in the Army revealed an ambient environment of sexualised jokes, stories and language experienced by 9 out of 10 of the 7,000 participants. Women were four times as likely to be offended by these behaviours as well as being more likely the targets of specific forms of harassment. Over a quarter of service women had experienced unwelcomed attempts to establish a sexual relationship with them by a colleague or senior officer, despite their discouragement. Few made a formal complaint believing they would be labelled a troublemaker or suffer an adverse career consequence if they did.

The recognition of sexual harassment as being unacceptable has gone through a number of cycles, with accompanying hopes that raising awareness of its harmful effects may result in its elimination. In the UK, sexual  harassment was not recognised in the 1975 Sex Discrimination Act. It was rather the case of Mrs Portcelli, a lab technician working for Strathclyde Regional Council, some ten years later which established her experiences at the hands of two male colleagues as representing a detriment within the meaning of the Act. They brushed up against her, made suggestive remarks, looked up her skirt when she climbed up a ladder and created a generally hostile work environment. 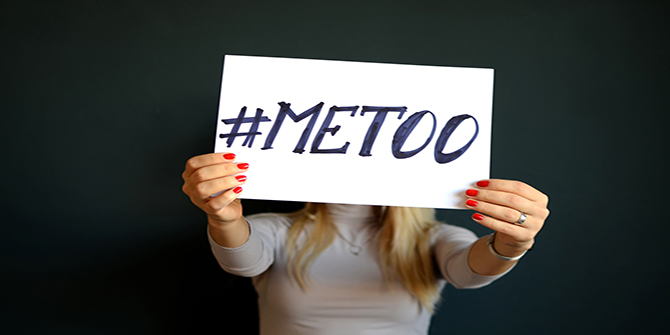 In the wake of this and cases in other jurisdictions, considerable work was undertaken by the European Commission, resulting in the 2002 Equal Treatment Directive outlawing sexual harassment. Yet the most recent research amongst the 28 member states shows that on average, a fifth of women experience sexual harassment – ranging between 9% and 37%. A survey across a wide range of UK business sectors, conducted on behalf of the Trades Union Congress in 2016, reported that more than 52% of the women questioned said they had experienced sexual harassment at work.

So, despite decades of scholarship, research, policies and legislation, sexual harassment remains a problem and exists not only in Parliament but across the board.

But why does sexual harassment persist? In part it is a labelling problem. What behaviours constitute sexual harassment? A recent YouGov survey showed that whilst some behaviours are thought of as sexually harassing across the genders and generations, such as upskirt photos, bum pinching, flashing and requesting sexual favours others, such as asking a woman out for a drink or commenting on her attractiveness, were not.

There were some gender difference e.g. looking at a woman’s breasts, which 57% of women thought was sexually harassing compared to 43% of men. There are also generational differences e.g. three quarters (74%) of 18- to 24-year-old women consider wolf whistling inappropriate, compared to just over a fifth of women aged 55 and over. In this latter age group, four in ten (42%) of women say it is acceptable behaviour (including 27% who’d find it flattering), while another 35% have no strong feelings on it. Older women are also more likely to say they have no strong feelings about being winked at, having comments made about your attractiveness and/or having a man place his hand on your lower back, whilst younger women consider these to be inappropriate. The survey also suggested that men underestimate, and women overestimate the numbers of women who have experienced sexual harassment.

There are several implications to be drawn from these findings. Firstly, there is a danger of trivialising or minimising behaviours which nevertheless are experienced as harmful harassment. Professor Liz Kelly suggests that sexual harassment lies on a continuum where different forms of sexual violence shade into one another. She argues this is not a severity index, but that it is the subjective experience of the target that matters. Some of my own research on sexual harassment amongst support staff in the police indicates that what might be considered banter by some is actually predictive of more serious forms of sexual harassment. The difference between what might mutually be regarded as amusing (and acceptable) on the one hand, and behaviours that are harmful on the other, is where it is unwanted and causes anxiety.

Secondly the lack of awareness can lead to wilful blindness. This is a legal concept referring to the active ignoring of a person’s harassing reputation, and where those who are in a position to do something about it purposefully avoid acquiring evidence. Dame Janet Smith’s inquiry into Jimmy Savile found the culture of the BBC enabled Savile (and Stuart Hall’s) offending to go undetected for decades with the Corporation missing at least five opportunities to stop the abuse. It has become clear that people in the movie industry knew about Harvey Weinstein yet complainants were ignored or paid off.

Thirdly there is the problem of unacknowledged victimisation. Harris and Firestone analysed responses from US military personnel to find that 21% of women and 13% of men had objectively experienced sexual harassment but were unwilling to label the behaviours as such. This was largely due to fear of being blamed or afraid to name the perpetrator because of threats of retaliation or retribution.

Another key factor in the continued incidence of sexual harassment is linked to the idea of organisational tolerance to its occurrence, and that is power. There are several aspects of power, one is sense of entitlement, meaning the right of a man to have sexual satisfaction simply because his maleness is a modern version of droit du seigneur, a supposed legal right in medieval Europe allowing a feudal lord to have sexual relations with subordinate women. Another is a tool to exercise control – research into the sexual harassment of women police officers finds that sexually harassing behaviours is one way to emphasise women’s “otherness” to a male model of policing, implying their ineffectualness for the full range of policing tasks. And a third is a level for giving or withholding rewards – the idea of quid pro quo sexual harassment, where those in superior positions may threaten subordinates that if they provide sexual favours they will gain advancement, and that failure to do so will inhibit their career development.

It seems ironic that as more women achieve seniority in public and business worlds, sexual violence is rising – whether that be reports of rape, or this renewed conversation about sexual harassment. More resignations may be in the pipeline but will this really lead to a thorough investigation of its incidence and prevalence or serve to remove its perpetrators and causes into obscurity?

Six centuries of vilifying the poor: Stigmatisation of welfare recipients and a lack of concern about low wages has origins in early mercantilist thought