With the General Election barely three weeks away, there is some mounting evidence that the race is tightening up. While much media commentary so far has focused on whether David Cameron can get to 40 per cent and gain a clear majority, this week’s polls raise an interesting possibility. What if the Conservatives could get edged below 37 per cent and Labour could reach its magic number – which is around 34 per cent.

To see why this is so important, consider the shares of the votes at the last general election in 2005, shown in the chart below. The Other parties – UKIP, Greens, BNP, and the Scottish and Welsh Nationalists – then polled one in twelve of all votes, and the Liberal Democrats a high of 23 per cent (a little buoyed up by opposing the Iraq invasion). That left 69 per cent of the vote for the top two parties to split between them, with Labour just pipping the Conservatives, by 36 to 33 per cent. 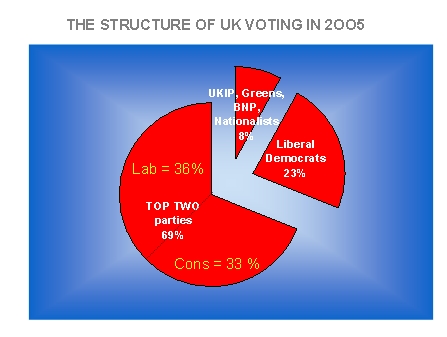 How different will things turn out in 2010? The answer is not very much at all as my second chart shows. YouGov’s massed regional polls for the first week of the campaign (covering 9,600 respondents) show that the Other parties are racking up 11 per cent of the votes, and are running at historic high levels in most regions. This support may be squeezed a bit in England by polling day, but is till looking like 10 per cent across Great Britain. The Liberal Democrats are on 19 per cent in the YouGov polls, but there is already evidence that their support is moving up as the campaign progresses. On past form we might expect them to pick up a couple more per cent on polling day, and this time (courtesy of Gordon Brown) they have three debates to get Nick Clegg better known and liked by the electorate. So I would be very surprised if they do not get 22 per cent on polling day. 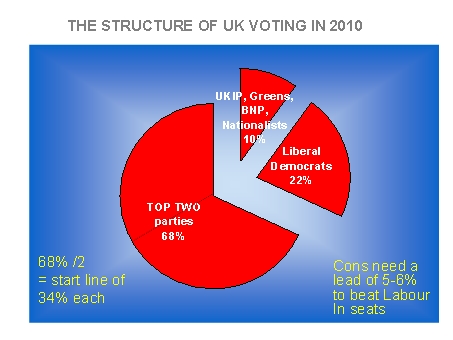 On current polls, then it seems that only around 68 per cent of the total votes are going to be available to the top two parties for them to carve up between them. Dividing this amount evenly by two, we get to the magic number of 34 per cent – a level for Labour that would spell Gordon Brown back in Downing Street and for the Conservatives would mean David Cameron looking into the abyss, and facing some serious criticisms from his party’s right wing.

So how far are the two parties away from this even split of the votes?  Our chart below of all the campaign polls shows that the answer is not very far, given that the Tory lead is so narrow. Instead this week’s polls pull the Tories back towards the 37 per cent territory and Labour up towards 32 per cent, with one poll today even putting them at 33 per cent – which is within spitting distance of a fightback triumph if Labour could sustain this. So Cameron is running at most 3-4 per cent above a near-disaster level.

Remember too that Labour gets more MPs per million votes than the Tories do, because its support is more ‘efficiently’ spread across the country and because turnout in Labour areas is very substantially less than in many Tory strongholds. 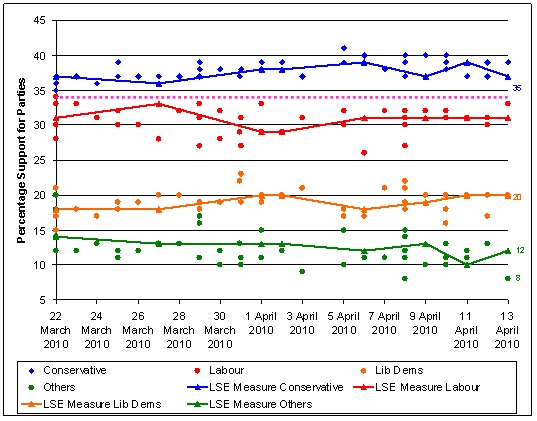 Of course, three weeks is a long time in politics, especially in an election campaign. A Conservative supporter looking at my chart could well argue that the gap between the Conservatives and Labour has proved enduring, despite some wobbles over time. And the heads of the UK’s polling companies too seem to concur – surveyed by Politics Home they all predicted essentially a narrow Tory majority. But given the asymmetry between the two parties in what 34 per cent means for each of them, David Cameron’s apparent inability to carve out a clearer lead will no doubt be causing some sweaty brows in Conservative HQ.

So, remember, you can get best characterize the state of the race by asking how far each party is away from that magic 34 per cent level. Today’s polls give the answer that:

There is certainly still everything to play for.