The government today released a report that proposes significant changes to the Ombudsman service in the UK. Crucially, the report argues for the creation of a single Public Services Ombudsman for England. Jane Tinkler outlines why this reform would better for individual citizens, better for improving services, and would bring about a more efficient redress system.

Today sees the publication of an interesting and important new report from the Public Administration Select Committee on the future of the Parliamentary and Health Services Ombudsman in England. Its title, Time for a People’s Ombudsman Service, gives a clue that the report backs some potentially far reaching changes to the way that the Ombudsman service is organised and its priorities.

I’m going to focus here on the report’s last recommendation, as it strongly supports the position Patrick Dunleavy and I have been arguing for some time. The set up in England of having separate ombudsmen for different parts of the public sector is a model that is no longer fit for purpose. PASC have come out clearly in favour of the creation of a single Public Services Ombudsman for England: “For complainants it would create a much simpler and more accessible ombudsman service, and for public services would allow learning and good practice to be disseminated more easily.”

This report is not the first to call for a change to how ombudsman services run in England. In 2000 the Collcutt Review proposed a single public sector Ombudsman for England. As did the Department for Constitutional Affairs Transforming Public Services report in 2004 and our report for the National Audit Office in 2005 called Citizen Redress. In 2008 the Law Commission called for a wide-ranging review of the public services ombudsmen and their relationship with other redress institutions. And most recently the Gordon (2013) Governance Review of the Local Government Ombudsman Service recommended that “consideration should be given to the creation of a unified public services ombudsman in the medium term”.

Despite this long-argued consensus, we still have redress responsibilities split across a number of ombudsmen. I hope therefore that this report is a catalyst for this crucial change that needs to be made to improve the outcomes for individual citizens, for the quality of public services in general and for the efficient running of the complaints system.

a) Better for individual citizens. The current redress arrangements are hopelessly chaotic. (The figure below from the Local Government Ombudsman gives a great but still partial picture of the mess as it exists.) As Which? highlight in their evidence to PASC, making a complaint about a care home or home care agency might mean involving five different organisations: their provider, the local authority, the Local Government Ombudsman, the CQC or Local Healthwatch. 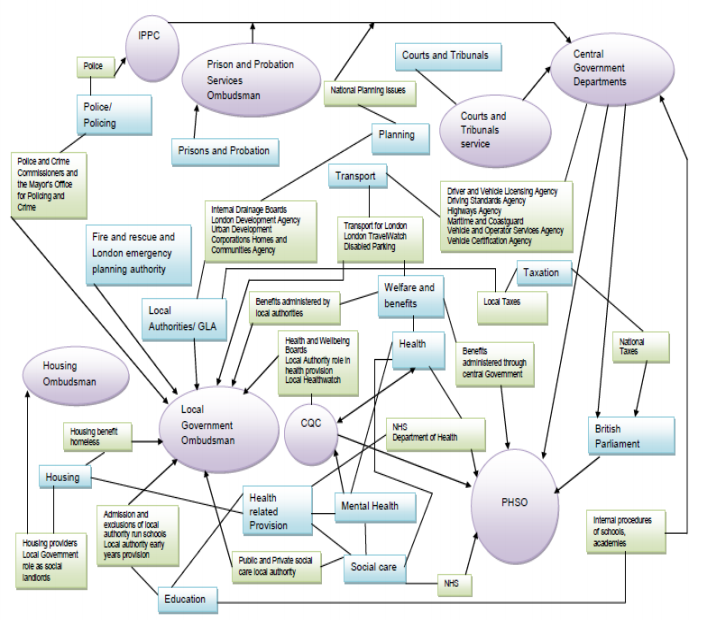 A single Public Services Ombudsman is needed to cut through all this chaos and create one point of contact for citizens when they are trying to get something put right. Our report for the National Audit Office in 2005 called Citizen Redress, (which PASC kindly refer to as “one of the most searching critiques of PHSO in the overall context of public redress”), outlines how difficult a hurdle even finding out who to contact about a complaint is. And as the organisations that are delivering public sector services continue to become more numerous and diverse, this will only get harder. Do you complain to the local authority that is responsible for the service? Or the organisation that is providing it? And the increasing introduction of private sector delivery bodies adds to this complexity in that some regulators and ombudsmen don’t have oversight of services provided by these companies. The General Dental Council, for example, can only look at your complaint when it’s about NHS treatment not treatment that you have paid for privately. This even applies when you had both these treatments in the one session from the same dentist. Is it any wonder that complainants get confused?

A vital change that needs to be made in order to make the PHSO more accessible to the public is to get rid of the MP filter and allow complaints to be made directly to the Ombudsman. The report tackles this directly and says the MP filter “defies all logic. It disempowers citizens, obstructs access to their rights, and deters people from making complaints.” PASC support of making this long-overdue change is a significant step.

b) Better for improving services. In addition to individual case handling, a single Public Services Ombudsman (PSO) could also play a much higher profile role in setting redress standards and holding organisations to account across the public sector. The numbers of complaints being received by public sector bodies are increasing as are those going to regulators and adjudicators. This is both because we as consumers are expecting more from government bodies, but also with rapid changes to how services are delivered and cuts in funding, there are real pressures on the quality and efficiency of the services being delivered.

Joined-up ombudsmen in Scotland and Wales play a key role in working with public sector bodies in their regions on setting standards for what they expect, providing training on good principals of complaint handling and helping to share good practice across the sector. They also are involved in holding organisations to account when they don’t reach these common standards. This ’redress leader’ role means they have a close working relationship with all the public sector organisations in their area. As the report says: “There is a clear benefit to the public and to good administration that the Parliamentary and Health Service Ombudsman should use its experience to inform and lead better complaints handling across its area of jurisdiction.” This oversight would enable the PSO to keep track of perennial complaint ‘black-spots’ in the system and identify new and emerging problems more quickly.  For this, any new PSO must have the powers to initiate her own investigations. The current Ombudsman is one of the few in Europe that isn’t able to do so already.

A single PSO for England might find this more difficult because of the geographical size and organisational complexity of England. However we feel that this can be overcome by using the Local Government Ombudsman model. So a PSO would have a national headquarters that deals with all the national level issues such as test cases, and between 3 and 9 regional offices would deal with regional level cases and take on this redress leader role working closely with public sector bodies in their area. The PASC report says: “The size of England does present a challenge for an Ombudsman, but we believe the creation of branch offices could go some way to addressing the issue and should be explored.”

c) Better for an efficient redress system. Our Citizen Redress research found that the complexity of the redress sector means that its size has been hidden as there is no single body having any kind of oversight of it. So in 2005, in central government alone there were 1.4 million complaint cases (this doesn’t include local government, police or NHS bodies). These cases were handled 9,300 staff at a cost of £510 million per year. The number of cases and therefore the costs involved with undoubtedly have increased significantly since that time.

There is clearly duplication of effort is a system as messy as the redress picture in England. And the longer that complaints take to be resolved, the more expensive they are. Our Citizen Redress research found that the average cost of handling one complaint within central government bodies was £155. Whereas the average cost for regulators and ombudsmen to handle a complaint was nearer £2,000.

Clearly reorganisation the currently separate ombudsmen into a single unit would have a financial implications. But when the reorganisation of separate tribunals into the Tribunal Service was made in 2010, costs per case were held relatively stable despite a 64% rise in the number of complaints. We argue that a similar financial argument can be made here.

And making the redress system more efficient also makes public services more effective. Complaints are early warning signs of serious problems in public service systems. They can be used to head off ‘service delivery disasters’ such as those seen in the NHS in Mid-Staffs Accident and Emergency and infection outbreaks in Maidstone and Tonbridge Wells. So the cost of not acting to ensure that the ombudsman service is working as efficiently as possible in the future could add up to far more.

Note: This article gives the views of the author, and not the position of the British Politics and Policy blog, nor of the London School of Economics. Please read our comments policy before posting. Homepage image credit: Alan Turkus