As Morten Egeberg writes, international organisations are typically composed of representatives with affiliations to the national level. The European Commission, in contrast, is one of the few international institutions in which key actors owe their allegiances to the supranational level. Assessing the potential for the Commission to act as a ‘laboratory’ for experiments in supranational institution building, he finds that nationality plays only a minor role in influencing the behaviour of Commission staff, and is simply one of many factors influencing the actions of Commissioners.

This was originally posted on the LSE EUROPP blog

Collective problems that cut across sub-national regions are probably most effectively solved through national institutions to which policy-makers have their primary affiliation and allegiance. In parallel, societal challenges which transcend national territories could, arguably, be taken better care of by supranational institutions to which decision-makers have their main connection and loyalty. However, except for a couple of EU institutions, the numerous international organisations around the world are notled by politicians for whom the international organisation constitutes their primary institutional affiliation; on the contrary, national politicians are in the driver’s seat. Thus, although international governmental organisations (IGOs) may represent organised responses to collective action problems beyond the nation-state, they may be seen as relatively primitive governance arrangements: if a nation-state was to be governed through a structure that parallels the structure of the IGO, this would have meant that a state would be headed by delegates from its constituent regions, convening in the capital some times a year, and served by a permanent secretariat.

The ‘problem-solving deficit’ characterising intergovernmental cooperation was already alluded to by French social philosopher Saint-Simon (1760-1825) who disappointedly observed the Vienna Congress in 1814, convened subsequent to the Napoleonic wars in order to re-establish peace among European powers. In his essay ‘The reorganisation of the European Community’ he described how the national delegates at the congress stood up for their respective countries, but none had the function of standing up for Europe and considering questions from a general point of view. The underlying idea was that institutions mould people: European (supranational) institutions, if established, would endow policy-makers with a European perspective just as national institutions so convincingly shape national frames of reference.

It took 138 years before a supranational institution materialised in the form of the European Coal and Steel Community’s High Authority: the European Commission’s predecessor. The High Authority was indeed an innovation, with its initiating and executive functions organised separately from the Council of Ministers, and with its own leadership entirely committed (in formal terms) to the organisation and European interests. Thus, the Commission constitutes a unique laboratory for studying the extent to which commissioners and their officials actually behave independently from their national origins, and take a broader perspective. It cannot be taken for granted that they will behave independently in this sense: the Commission has also been portrayed as permeated by national interests and the College of Commissioners has been compared to the Council’s Committee of Permanent Representatives (‘Coreper’). However, a recent review of the scholarly literature may have provided a clearer picture of actual decision-making within the Commission. (Whether supranational institutions are desirable or not in concrete situations is not up for discussion in this article.)

Concerning Commission officials, studies have shown a relationship between their national background and their attitudes on broad issues like intergovernmentalism vs. supranationalism. Those coming from federal or decentralised states tend to be more in favour of supranational solutions than their colleagues from unitary or centralised states; the reason may be that the former are already more familiar with multilevel governance arrangements. Those who have experience from national administration before entering the Commission are more inclined to hold state-centrist views. However, when officials are asked to specify more concretely which policies they want to become more supranational, officials’ nationality becomes a less powerful explanation than their directorate general (DG) affiliation.  Officials’ DG affiliation is also important in order to account for their economic ideology. As regards understanding Commission bureaucrats’ decision behaviour, numerous studies, applying different methods, indicate that their DG affiliation is in general the best predictor. This even holds for the so-called national experts who are employed on a short-term basis, thus without a clear socialisation potential. In sum, in order to explain the concerns and interests that Commission officials emphasise in their work, one should probably identify their organisational role before their national background.

Arguably, the weak point of the Commission’s organisational design, given that supranationality is a stated goal for the organisation, resides in its political leadership. Although commissioners have the Commission as their primary organisational affiliation in formal terms, the fact that they are nominated by member states could make them more susceptible to national concerns. Accordingly, studies do indicate that the national background of commissioners matters more than the national background of Commission officials as regards decision behaviour. That said, the role of commissioners is highly compound: studies indicate that the portfolio (DG) role may be most frequently evoked, and in addition an overall ‘Commission role’ and a party-political/ideological role have been observed. The actual behaviour of commissioners therefore displays many commonalities with national ministers; both adhering to the concerns of their respective departments, local constituencies, political parties and the college as such, although the mix may be different. What seems clear is that commissioners (often former ministers) tend to behave differently from ministers in the Council, not to speak of the European Council.

The main reason behind the observed behavioural patterns is probably the organisational design of the Commission. First, not only the administrative personnel, but also the political leaders, have the Commission as their primary affiliation in formal terms. Second, the organisation is specialised according to sector or function rather than territory/geography from the top to the bottom, thus creating a decision environment that partly de-emphasises particular national concerns. Third, there are some additional factors that contribute to downplaying the role of the decision-makers’ nationality. Regarding the services, multi-national staffing even at the unit level of the administration, the tendency to pursue long careers entailing a considerable socialisation potential, and merit-based recruitment probably make a difference. Concerning the college, increasingly multi-national staffed cabinets, the Commission president’s right to (re-)distribute portfolios among commissioners, and the enhanced role of the European Parliament as regards the appointment of the president and the other commissioners probably matter as well.

A more detailed discussion of this topic is available in: Egeberg, M. (2012) ‘Experiments in supranational institution-building: The European Commission as a laboratory’, Journal of European Public Policy, 19:6, 939-950.

Morten Egeberg is Professor of Public Policy and Administration in the Department of Political Science and ARENA – Centre for European Studies, at the University of Oslo.

Looking Towards The Budget: Top 5 blogs you might have missed this week 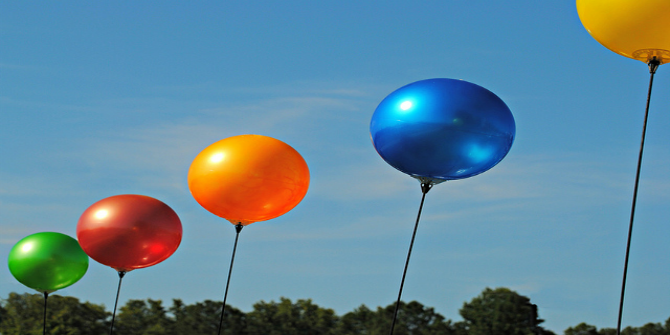