In recent years, the frequency of jihadi terrorist attacks around the world has risen. Various commentators argue that this rise – alongside the resulting media coverage, successive waves of migration and drops in real living standards – has contributed to increased Islamophobia, general anti-Muslim sentiments, and a surge in populist politics in the west. Our research shows that in the UK, minority Muslim communities now face surges in hate crime that are especially evident after terrorist attacks far from where they live.

Recent CEP research offers new, large-scale quantitative evidence on the local impact on Islamophobic hate crime and incident occurrence following ten international jihadi terror attacks. It uses rich, high frequency administrative data from Greater Manchester Police in the period from 2008 to 2018. The unique nature of the data, and the unpredictability of terror attacks, provide a quasi-experimental setting allowing reliable conclusions to be drawn on the temporal impact of jihadi terror attacks on local Islamophobic hate crimes and incidents, the direction of causality between media and hate crime, and on the characteristics of hate crime perpetrators and their victims.

Using a difference-in-differences empirical research design with weekly variation across Islamophobic hate crime (treated) and other types of hate crimes as controls, there is evidence of a sizable effect of jihadi terrorist attacks on Islamophobic hate crime. The immediate spike up is shown in Figure 1. This is followed by higher post-attack levels for three weeks, with a decay as one moves further in time away from the attack week. An important empirical confirmation of the reliability of the results is that there is no evidence of differential pre-trends in the three weeks before the attack. 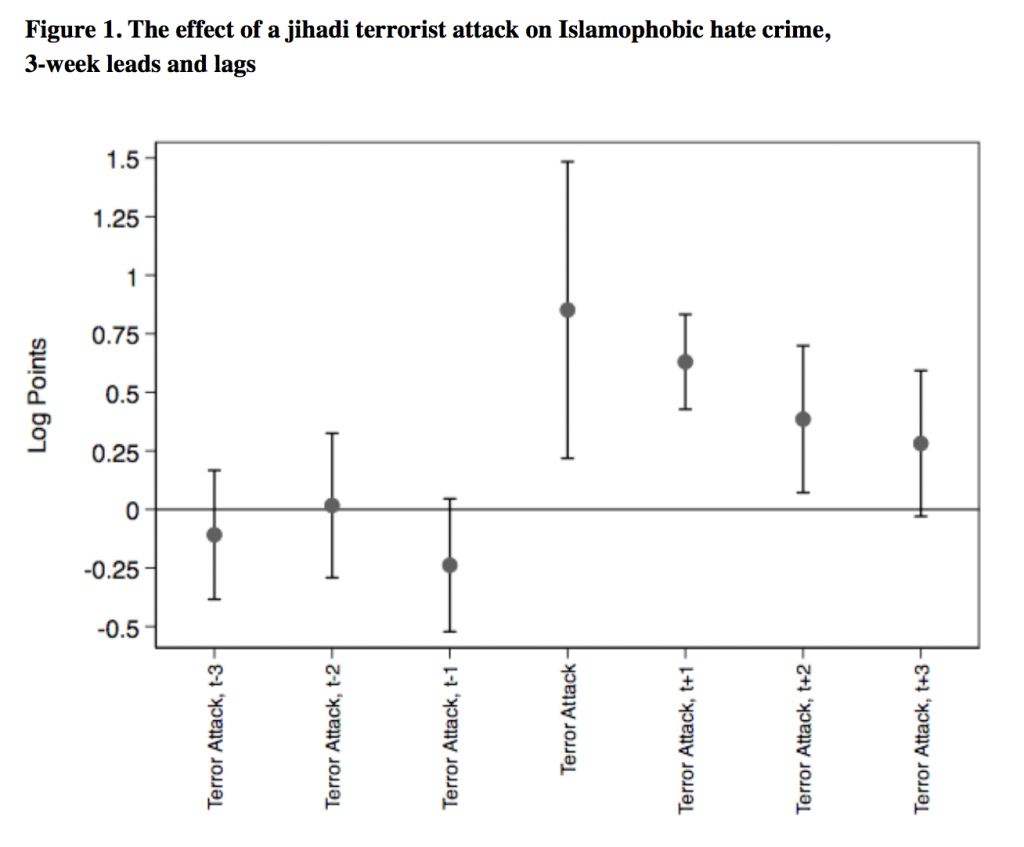 In these weeks after attacks occurred, Islamophobic hate crime incidence is higher than before, so that cumulatively Islamophobic hate crime ends up at a higher level. Considering that the estimates show the average across the ten attacks that occurred, therefore at least partially a consequence of the attacks, by 2018 the number of anti-Muslim hate crimes and incidents stands at a considerably higher level than before the attacks occurred. In fact, by 2018 there are around four times more such hate crimes and incidents than there were at the start of the data coverage time period ten years before in 2008.

Islamophobic hate crimes and incidents are highly concentrated in less densely populated suburban areas with a higher share of Arab and Muslim populations (and lower British and White populations).

Having access to offender data allows for a novel study of the characteristics of perpetrators of Islamophobic hate crime. Such offenders are older and more likely to be white as compared to other offenders. Interestingly, on average they commit crimes in slightly larger groups than other types of crimes. Whilst 60% of offenders live within 2km of the location of the committed hate crime, they tend not to live in the neighbourhoods of their victims, but in the neighbouring places.

In terms of mechanisms at play, the main argument is that attitudes and behaviour (including criminality) towards particular groups like Muslims have scope to be altered by actual attacks and that they can be triggered or magnified by media coverage of attacks. The way in which the media report on terrorism, and whether that affects individual behaviour, is both highly sensitive and controversial. Recent research has found that terrorist attacks by a Muslim perpetrator attract on average about 4.5 times more media coverage, controlling for a number of characteristics. They find that U.S. media outlets disproportionately emphasise the smaller number of terrorist attacks by Muslims – leading them to argue Americans have an exaggerated sense of jihadi terrorism threat.  Thus, ‘attitudinal shocks’ may cause individuals (maybe with a prior inclination being tipped over a threshold by the media activity) to become perpetrators of hate crime.

Figure 2a shows an example of an inaccurate and sensationalist front page in a UK newspaper that followed the Paris attacks in November 2016 while Figure 2b shows the most common words in UK newspaper articles reporting on jihadi terrorist attacks (note how ‘hate’ itself is one of the most frequent words mentioned). It is perhaps not surprising that such inflammatory reporting has scope to magnify hate crime. Indeed, study of daily data reveals real-time media to be a causal mechanism underpinning the surge in local hate crimes and incidents that occur following an attack. 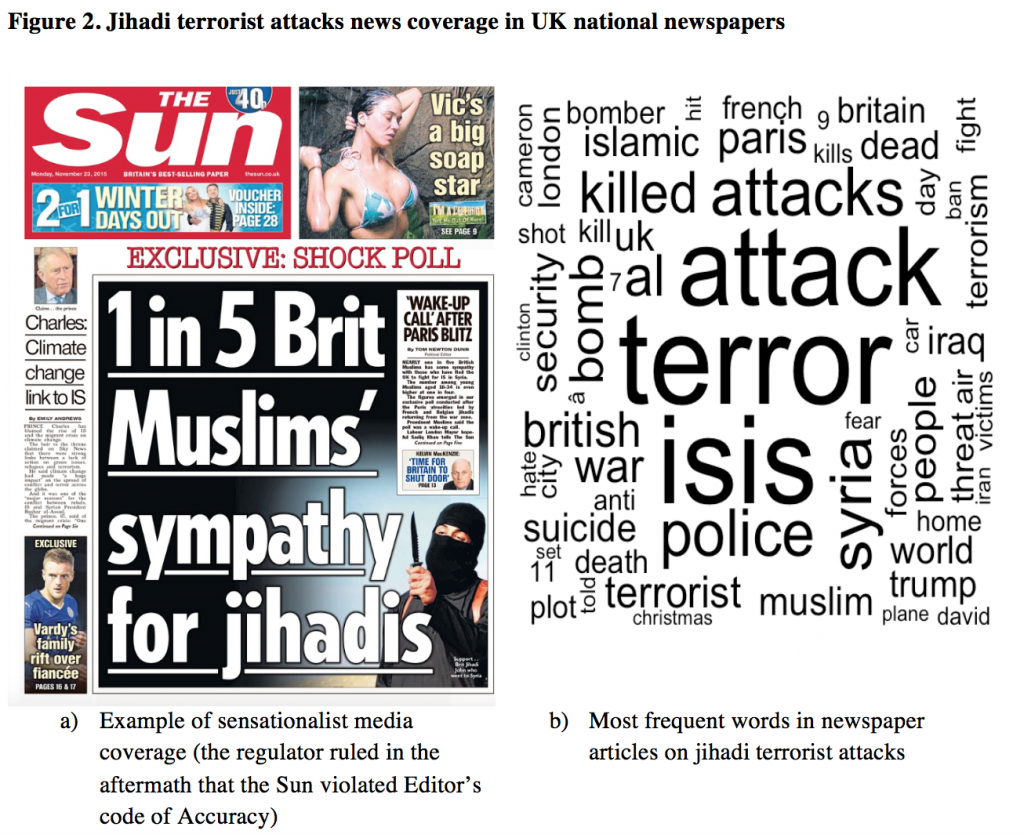 This is also visually shown in Figure 3a for the case of the Paris attacks in November 2016 where it is observed that hate crime peaks follow after the peak in newspaper reporting. Replicating the difference-in-differences analysis on daily data, we find that a peak in hate crime occurs on the second and third day following the attack as shown in Figure 3b. This provides support that Islamophobia is not only an immediate response to the attack, but is additionally incited by the information on perpetrators and victims presented by the media over the days following the attack.

Figure 3a Daily Time series around the Paris attacks 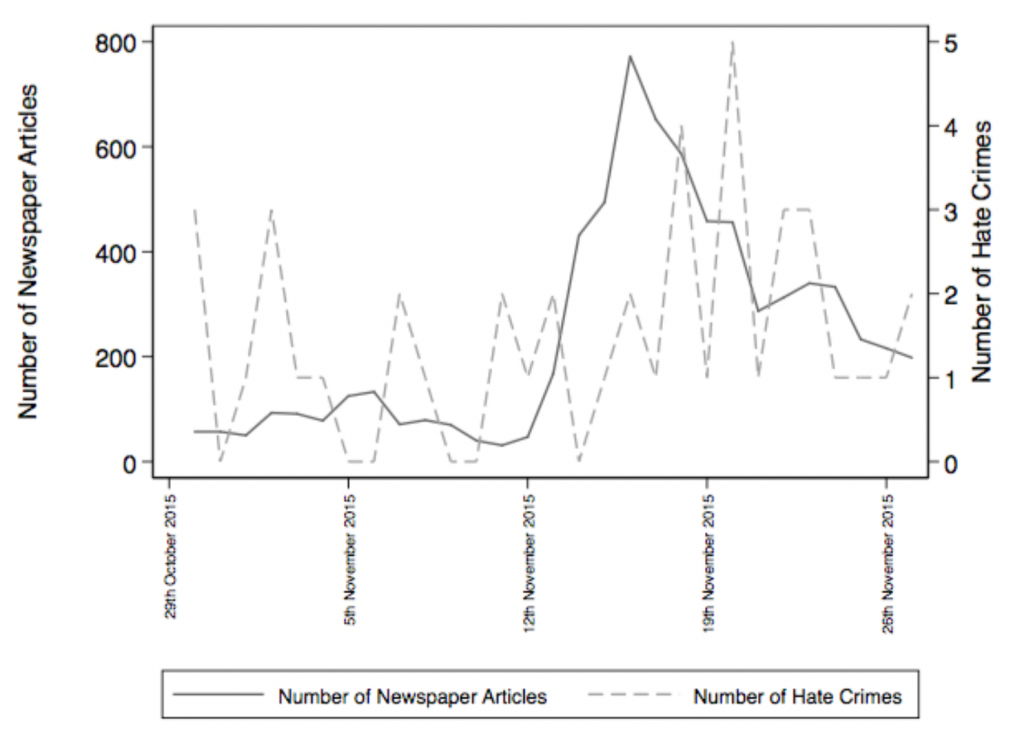 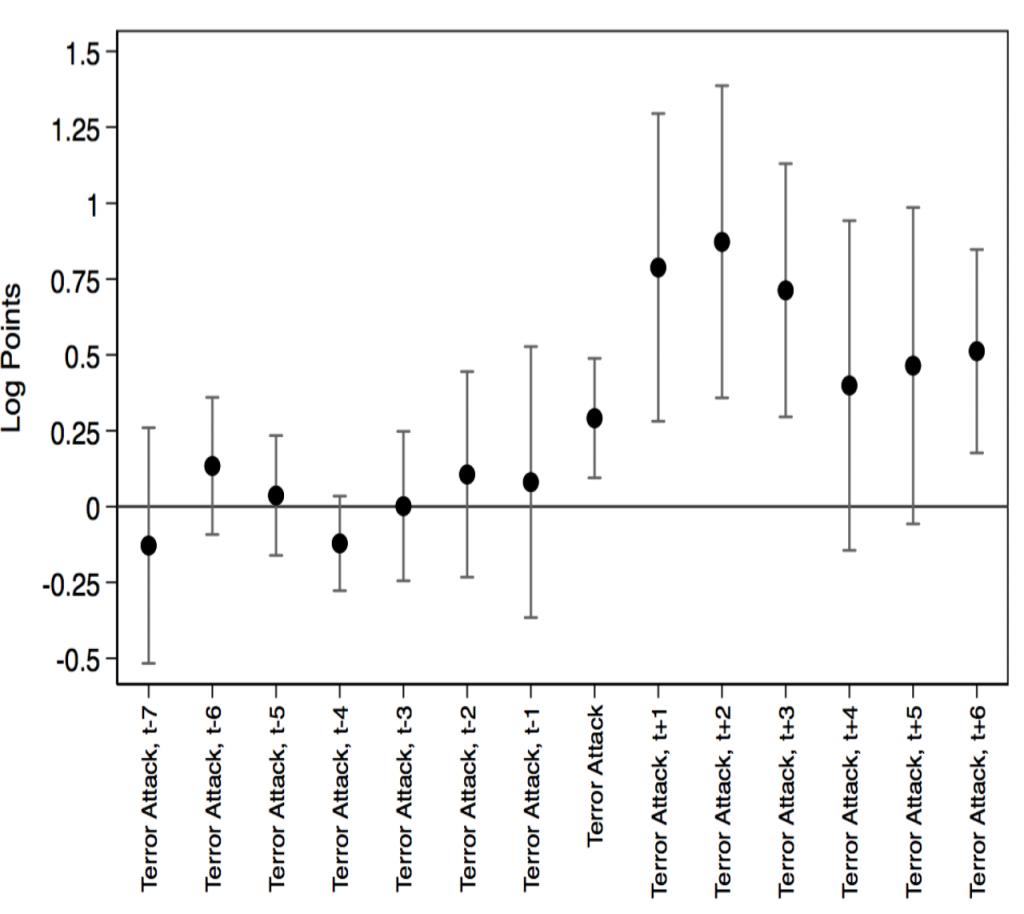 Finally, it is clearly worrying that hate crime is magnified by the way media coverage is structured and presented. This presents pressing issues for wider society about how the media go about their business of reporting on terror attacks and other sensitive events. A big challenge which should be prioritised for policymakers and regulators is the extent to which sensationalist, exaggerated and downright inaccurate reporting needs to be more carefully monitored and where necessary regulated. This applies to conventional modes of media coverage and more broadly to online and social media coverage.

Note: the above draws on the authors’ CEP Discussion Paper.

Ria Ivandic is a Postdoctoral Research Economist at the LSE Centre for Economic Performance.

Tom Kirchmaier is Visiting Senior Fellow at the LSE Centre for Economic Performance.

Innovative firms face greater obstacles in obtaining finance, despite being crucial to the recovery