Despite the 2019 general election being portrayed as the most important in a generation, Christopher Kirkland writes that it is too simplistic to suggest that some elections are more important than others.

The Conservatives’ message in the 2019 election is that it wants to ‘get Brexit done’. More than three years after the EU referendum, which was consistently defined as a once in a generation event, they seek to build upon the frustrations of voters who feel they have not been listened to. Johnson and his team have sought to blame other parties, the judiciary, and Parliament for the ‘inability’ to agree the terms of Britain’s departure from the EU, ignoring the fact that Parliament voted in favour of giving Johnson’s Brexit deal a second reading, and that it was the government – led by Boris Johnson – who decided not to proceed with this after losing a vote on its timetable for the bill.

Nor is this the first time they have offered this message to the voters. The party’s 2019 European Elections were fought under the slogan ‘the only party which can get Brexit done is the Conservative Party’ and the 2017 election, engineered by a Conservative government, was called to allow the Conservative Prime Minister to secure a majority for her Brexit deal (a deal that a significant proportion of Conservative MPs – including Boris Johnson – would subsequently vote against).

Yet the party’s campaigning on the issue has been markedly different in different elections. In 2016, the party was split on the referendum. In the 2019 European elections, there was a deliberate strategy of running a minimalist campaign to allow for a poor electoral performance that was expected to result in the loss of half of Conservative MEPs (in the end the Conservatives won just 4 MEPs down from 19 in 2014).

These repeated messages are designed to heighten the importance placed upon each election. They represent a call to supporters and those sympathetic with the arguments to register to vote, campaign, and vote for a particular party. Yet there is little evidence to suggest that such rhetoric is changing voter behaviour. Despite the arguments about Brexit and its importance in the 2019 elections, turnout was only fractionally higher than in 2014, and indeed lower than the  corresponding 2004 figure. All three were markedly lower than turnouts in the 2016 referendum of the general election of 2017.

If the 2019 election is not seen as being any more salient than 2017, then it will unlikely lead to a finalisation of the Brexit debate. Key questions over legitimacy of policy implementation and electoral processes will remain unanswered. And – just as proved to be the case on the morning of 24 June 2016 – different interpretations deciphering the meanings of results will be offered. Farage famously made such arguments ahead of the Brexit referendum, arguing that at 52:48 vote in favour of remaining in the EU would equate to ‘unfinished business’.

So which election then is the most important? Or able to deliver fundamental changes? Which results matter most? Is the importance of such elections determined by the campaigns, and slogans of political parties or are other factors also important? Given that the issue of Brexit has not been ‘resolved’ by either the 2016 referendum, the 2017 general election, or the 2019 European elections it is unlikely that the 2019 general election will offer closure. Corbyn has promised to legislate for a further referendum if he wins the election. Even if Johnson wins the election, the practicalities of negotiating the various aspects of Brexit and the future trading relationship mean that such discussions are likely to continue well into the next Parliament and beyond.

Brexit is not an anomaly in this regard. Other parties also have a running theme to their campaigns. Often (opposition) parties suggest that the current election campaign is the most important of a generation. After almost a decade of austerity, the Labour Party are advocating this election represents a chance for ‘real change’ – as Corbyn’s introduction to the 2017 manifesto also promised.

Such differences are not only confined to political parties. The media reporting of elections can also be inherently unequal. The media ran over twice as many stories on the 2019 European elections than they did on the local elections fours week earlier. The content of both, however, were dominated by narratives of Brexit; to the extent that one national newspaper felt the need to run a story entitled ‘Local Elections 2019: Can you vote for the Brexit Party in the Elections? Are they standing?’ to which the answer was no.

A further comparison between three different – safe Labour – by-elections all conducted in November 2012 (Croydon North, Middlesbrough and Rotherham) demonstrates that media coverage is not universal and could depend on the political parties standing in the election. The reporting of the Rotherham by-election was inherently linked to the electoral rise of UKIP and a precursor to contemporary debates over Brexit.

Such comparisons demonstrate that it is too simplistic to suggest that some elections are a priori more important than others. As the comparison between the European, local, and general elections of 2019 demonstrate different actors engage differently across different elections. This has two implications for those interested in understanding elections. Firstly, that we should avoid homogenising actors within elections. Political parties and the media may have differing reasons to attach different levels of salience to each election. Secondly that elections of the same type are not homogeneous entities; some will be perceived (on aggregate) to be more important than others. Equally, by extension, if elections of the same type cannot be homogenised then neither can different elections.

I expand such arguments in my new book Classifying Elections in Britain. This explores a range of elections in a British context and argues that existing understandings of contests which offer a binary choice between first- and second-order elections are unable to accommodate the increasing number of elections currently held in Britain. It argues that actors within electoral processes have not attached equal salience to ‘new’ elections (such as elections to devolved bodies or the Police and Crime Commissioner elections).

By deconstructing the roles political parties, the media, and voters play in elections the book establishes a more holistic understanding of elections; judging each on their individual characteristics. This highlights how perceptions of elections can change between different elections but also elections of the same type (answer the question is the 2019 general election more important than the 2017 election?). Understanding each election is important in understanding the policies that follow (especially if they instigate radical changes).

Offering a means of exploring such changes in the salience afforded to different elections is important beyond single issues such as Brexit in a multilevel governance system where legitimacy is conferred upon different actors or institutions. Devolution has led to greater plurality of power. Understanding how different elections interact with one another is important in understanding how wider political decisions are made in Britain. 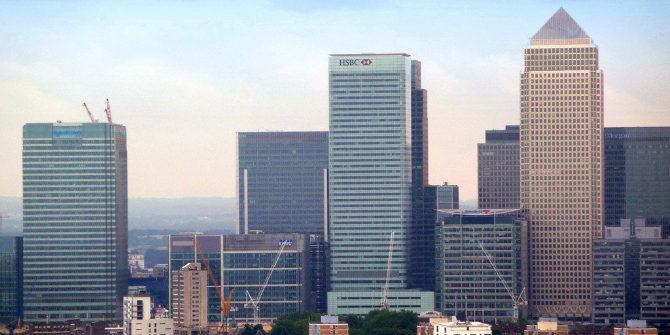 HSBC – A criminological perspective on ‘the bank of tax cheats’