Northern Ireland’s politics are in the midst of a crisis fuelled by the UK government’s austerity programme, and continued tensions over the presence of paramilitary forces linked to Sinn Fein. The Conservative Government’s Theresa Villiers has suggested that the reimposition of direct rule from Westminster could be a way out of the impasse. Sean Swan argues that this approach is misguided in the extreme, and potentially very dangerous indeed.

Northern Ireland Secretary Theresa Villiers, speaking at the Conservative annual conference, has raised the possibility of returning Northern Ireland to “direct rule” from London. The reasons for suggesting  this are firstly, the impasse in the Northern Ireland Assembly on the question of austerity. This, almost inevitably, has broken along Unionist/Nationalist lines: the Unionist parties support the cut-backs, but “the two nationalist parties [Sinn Fein and the SDLP] withdrew their support”. The result is political paralysis. Secondly, the alleged continued existence in some form of the Provisional IRA. This highlights, as Ms Villiers put it “the continued presence of paramilitary organisations” which “have no place in a democratic society”. The political criticism here is, of course, aimed at Sinn Fein.

The normal solution to political deadlock in any parliamentary system is the calling of elections and letting the people pass judgement upon the contending parties, but Ms Villiers does not suggest this, she instead suggests the abolition of the Assembly and a return to Direct Rule from London. Ms Villiers admits that such a course “would be a severe setback after everything that’s been achieved over recent years”.  She is understating the situation. The Northern Ireland Assembly is central to the Good Friday Agreement. Not only does it constitute the core of ‘strand one’ of the Agreement, (relations between the two communities in Northern Ireland), but it is central to the North-South Ministerial Council and ‘strand two’ of the Agreement (North-South relations within Ireland). The Assembly is central also to Northern Ireland’s participation in the British-Irish Council which constitutes ‘strand three’ of the Agreement (east-west relations between Britain and Ireland). In short, Ms Villiers is proposing nothing short of tearing up the peace agreement.

Ms Villiers argues that Northern Ireland must accept austerity because “the Government will not fund a more generous welfare system in Northern Ireland than it does in the rest of the UK”. However, it had long been accepted that Northern Ireland is different and social security policies there had to also be different in order to avoid further destabilising the situation (leading to it being dubbed by The Guardian, not inaccurately, the “independent Keynesian Republic of Northern Ireland”). While it could be maintained that such special treatment was necessary during the Troubles, that era is now over and such special treatment is no longer warranted. But this is a, perhaps willfully, over-optimistic reading of the situation.

Ms Villiers herself not only highlights the continued existence of paramilitary organisations but, correctly, flags up “the continuing terrorist threat from dissident republican groupings who maintain both lethal intent and the capacity to mount lethal attacks”. Dissident republicans are republicans who reject the Provisional republican movement and Sinn Fein’s commitment to the Good Friday Agreement and a political strategy, arguing that such a policy is reformist, an abandonment of republicanism and doomed to fail. They favour the continuation or renewal of ‘armed struggle’. The re-introduction of Direct Rule and the effective tearing up of the peace agreement would play powerfully into the hands of these Dissident groups whose immediate reaction would be to say ‘we told you so’. It would seriously compromise Sinn Fein’s influence and control over the wider republican community – to the benefit of such Dissidents.

Perhaps Ms Villiers has not called for an election because she is aware that the outcome might not be conducive to her position. It is quite possible that the Sinn Fein vote will hold up, or even increase. It is also a near certainty that the balance of power in the Assembly would remain unchanged because people in Northern Ireland mainly vote along communal nationalist/unionist lines. The current impasse on austerity is thus unlikely to be resolved by an election. Perhaps this confirms her implied position that Northern Ireland is too divided for self-government. Certainly the divisions are real, but Direct Rule from London is not the solution.

The heart of the peace agreement is the recognition of the divided nature of Northern Ireland and the need to recognise the national identities of both communities. This found many expressions, including the right of all to be recognised as ‘British or Irish’ and the right to both British and Irish citizenship, but the core institutional expression it took was the power-sharing Assembly and associated institutions. Ms Villiers is not simply suggesting tearing up the peace agreement, but is suggesting replacing it with something – Direct Rule from London – which safeguards and recognises one community in Northern Ireland, the Unionists, but strips the other community of any recognition of their identity or – as they would perceive it – without any guarantees against discrimination at group level. It is not a neutral act.

If the Assembly is to stay, perhaps the wisdom of forcing austerity upon Northern Ireland needs to be reconsidered. It would be rather reckless to risk the entire peace process for an article of Tory dogma, especially when the region in question has a population of less that two million and where the savings made by enforcing austerity would be correspondingly tiny. Alternatively, if the situation emerges in which self-government within Northern Ireland proves impossible owing to the deep divisions between the two communities, the only form of direct rule which would be compatible with the peace process is join authority and ‘direct rule’ by  both London and Dublin’. This would create its own problems (and hostilities), but it is the logic of the situation that is being created. Is enforcing austerity in a region as volatile and divided as Northern Ireland worth it?

Note: This post originally appeared on the Democratic Audit blog. It represents the views of the author, and not the position of the British Politics and Policy blog, nor of the London School of Economics. Please read our comments policy before posting. Featured image credit: Etrusia UK CC BY-NC-SA 2.0 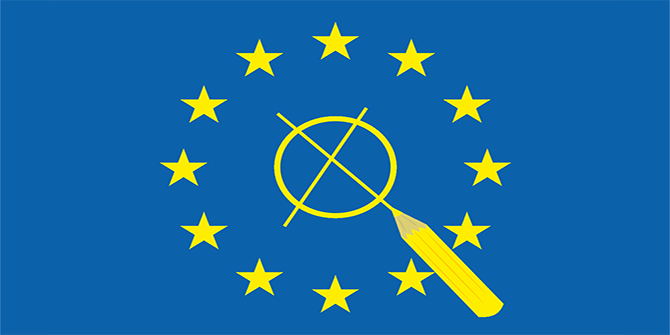