John Curtice looks at the evidence of recent opinion polls to examine the character and sources of support for UKIP, and to consider how the challenge posed by UKIP might best be met. He finds that the party is sapping more support away from the Tories than the other two main parties, and argues that the Tories need to turn around the economy rather than fret obsessively about Europe to respond to the challenge posed by UKIP.

During their first two years as the senior party in the coalition, the Conservatives largely retained their 2010 level support, not a bad achievement for a party in power presiding over an unresponsive economy. However, in the spring of 2012 Conservative support fell away noticeably in the wake of a Budget that occasioned an unusual level of criticism and subsequent policy reversals, and which coincided with a number of other ministerial misfortunes that came to be dubbed by the opposition as an ‘omnishambles’.

Meanwhile since last spring there has been a remarkable increase in support for UKIP whose current rating in the polls is on average at least equal to that of the Liberal Democrats. The party now threatens to pose the most serious independent fourth party incursion in English electoral politics in the post-war period. It is fighting the local elections this year on a widespread basis for the first time and how well UKIP does and with what consequences for the other parties will arguably be the question that attracts most attention when the results on declared on Friday.

There has been much speculation and assertion about whether UKIP’s rise simply poses a threat to the Conservatives (as its timing would seem to suggest), or whether all of the three main parties at Westminster have reason to fear UKIP’s rise. In practice, the message from the opinion polls is quite clear. Based on polls conducted by different companies during April, Chart 1 shows that the Conservative party is losing votes more heavily to UKIP than either the Liberal Democrats or (especially) Labour. On average the polls in that chart suggest that some 16% of those who voted Conservative in 2010 and currently have a party preference are now backing UKIP. The equivalent figure for the Liberal Democrats is 8% and for Labour 4%. 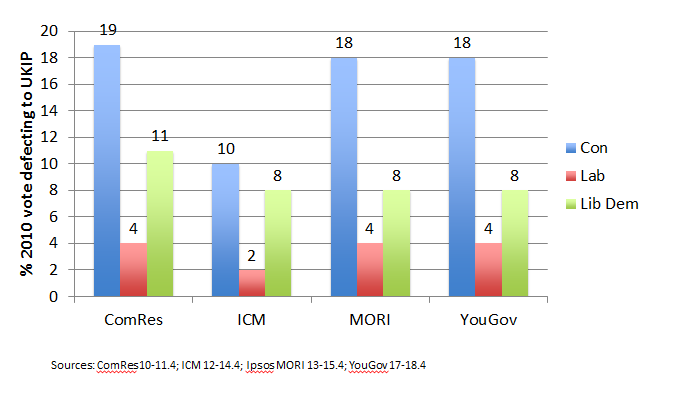 Nigel Farage himself has been keen to assert that much of his party’s support comes from the politically disaffected, many of who did not vote in the past. However, these claims cannot be verified from the information published by most national polls as typically they do not show the current voting intentions of those of those who did anything other than vote for one of the three largest parties in 2010. All that can be stated is that around a third of UKIP’s current support comes from those who did not vote for one of the three largest parties in 2010, including not only those who abstained, but also, crucially, those who voted UKIP in 2010.

The social character of UKIP’s support is commensurate with what one would expect for a party that has made social conservatism a key part of its appeal alongside anti-Europeanism. In particular, support is at least three times higher amongst those aged 60/65 and over than it is amongst those 18 to 24. It also tends to be rather lower in the AB professional and managerial portion of the population, a feature that distinguishes it from that of the Conservative party. At the same time UKIP support is higher amongst men than women, a pattern also to be found in support for nationalism and independence in Scotland (where UKIP itself is relatively weak). These patterns are not new, but were also evident on the occasion of the last European elections in June 2009 when UKIP secured 16% of the vote.

In responding to UKIP’s rise, the Conservative party appeared initially at least to assume that it was driven primarily by growing discontent with the UK’s membership of the European Union, thereby leading the Prime Minister to offer the prospect of a referendum on that subject in the event of a majority Conservative government after 2015. In the event, that manoeuvre has proven inadequate (though the speech may for a while at least have had the paradoxical effect of reducing the level of opposition to Britain’s membership).

The initial trigger for the Conservatives’ difficulties and UKIP’s rise appears rather to have been a marked drop at the time of the 2012 Budget in public confidence in the Conservatives’ ability to handle the economy. According to ComRes, before that Budget consistently around 30% agreed that they trusted David Cameron and George Osborne to run the economy; since then the figure has consistently been around 25%. UKIP supporters are amongst those expressing very low levels of trust in the economic competence of the Conservative duo. Meanwhile, more broadly, according to Ipsos MORI satisfaction with David Cameron’s leadership has also been consistently lower since the ‘omnishambles’ of spring 2012 than it was beforehand.

Thus some voters were shaken from the Conservative tree by declining confidence in the party’s ability to provide effective government. Many of those voters might have been expected to use UKIP as a haven of protest anyway, given that voting Liberal Democrat as a way of protesting against the performance of the government was, in contrast to previous parliaments, no longer an option. But UKIP also has some positive attractions for voters. In particular it is clear from polling evidence collected by Lord Ashscroft on the occasion of the Eastleigh by-election and from data collected by YouGov nationally that the party’s popularity lies as much in concern about levels of immigration into the UK as it does in the party’s anti-European stance per se. UKIP voters are, it seems, more concerned about the implications of EU membership for Britain’s ability to control its borders than they are about Britain being bossed about by bureaucrats in Brussels. It is, of course, a concern that continuing low growth will have done nothing to assuage. If the Conservatives are to counter the challenge of UKIP it looks as though they need to turn around the economy rather than fret obsessively about Europe.

John Curtice is Professor of Politics at Strathclyde University. 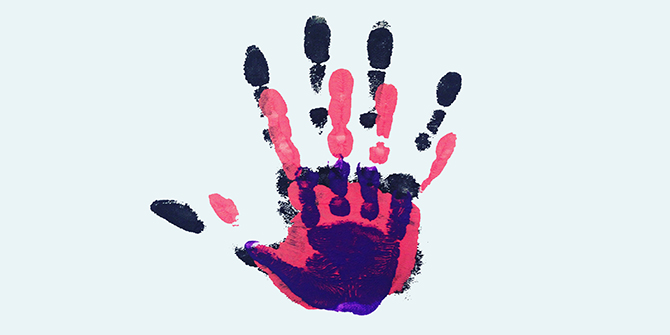