Scotland has a female First Minister, who competes in Holyrood with a female Leader of the Scottish Labour Party, as well as a female leader of the Scottish Conservatives. While this should be welcomed, we should not assume that the problem of women’s under representation is solved for good, and instead look at what statutory measures could do to achieve lasting positive change, argue Meryl Kenny, Fiona MacKay, and Cera Murtagh.

The past year has heralded a series of ‘firsts’ for women in Scottish politics – including the election of Nicola Sturgeon as the first female First Minister in November of last year, followed by the announcement that her Cabinet would be 50/50 women and men. One year later, the three largest parties in the Scottish Parliament are all led by women, – including not only Sturgeon, but also Ruth Davidson, leader of the Scottish Conservatives, and Kezia Dugdale, the newly elected leader of Scottish Labour. The Scottish Green Party also has a gender-balanced convenor team of Patrick Harvie and Maggie Chapman.

This ‘female face’ of political leadership in Scotland provides a powerful image of an apparent breakthrough on women’s representation, pointing to a potential shattering of the political glass ceiling and the apparent normalisation of equal sharing of executive power.

Yet, we need to place these achievements within a broader context. Women continue to be under-represented at all political levels in Scotland – men are 76% of local councillors; 83% of Scottish MEPs, and 66% of MSPs and Scottish MPs. Meanwhile, those gains that have been made on women’s representation thus far have been achieved more by accident than by design. Thus, while the upcoming 2016 Scottish Parliament elections may well prove to be a step change for women’s representation in Scotland, the 50/50 mark still appears some way beyond reach.

Trends in Women’s Representation in Scotland

What explains women’s continuing under-representation in Scottish politics? The research evidence in Scotland and the UK is clear, highlighting the key role of political parties as the central ‘gatekeepers’ to political office. When parties have adopted measures aimed at promoting women’s representation – including gender quotas – the proportion of women in politics has increased.

We can see the effects of these measures in the first elections to the Scottish Parliament in 1999, where just over 37% of MSPs elected were women. These numbers were the result of Scottish Labour’s use of formal gender quotas – in the form of a mechanism called ‘twinning’ for constituency seats and gender balancing on the regional lists – as well as informal measures adopted by the SNP, including favourable placement for women candidates on the regional lists.

Over time, however, the numbers of women in the Scottish Parliament have stalled or fallen, and progress at other levels has been slow, raising questions as to whether equal representation was still on the political agenda. The use of gender quotas by political parties has been largely one-sided to date, and there has been little sign, until recently, that quotas have ‘caught on’ in Scottish politics, either across political parties or different political levels. In 2003, the percentage of women in the Scottish Parliament almost reached the 40% threshold – more than twelve years on, this remains the ‘high tide’ of women’s representation in Scotland at any level.

Women’s representation: catching on in 2016?

The 2014 independence referendum and the 2015 General Election have shifted the political contours of Scotland, while also signalling a potential step change in debates over women’s voice and place in political life. Having women in the ‘top jobs’ has certainly made a difference – Scottish Labour leader Kezia Dugdale is a co-founder of Women 5050, and has pledged that half of the party’s new candidates for the 2016 Scottish Parliament elections will be women. Nicola Sturgeon, meanwhile, has pushed for the SNP to adopt quota measures, including all-women shortlists, and has also publicly supported the Women 5050 campaign.

Scottish politics is also changing from the bottom up, including a surge in political engagement and grassroots activism during and after the referendum. All the pro-independence parties have seen their membership soar post referendum and this is likely to impact on the outcome of the 2016 elections.

What do the numbers look like so far? At time of writing, many selections have yet to be completed. However, preliminary analysis of those selections finalised so far suggests that women’s representation is starting to ‘catch on’ again as a matter of party competition and that gender quotas are back on the political agenda.

Yet, we can also see significant disparities between parties in terms of the numbers of women they have selected and are likely to elect. Turning first to the SNP, which is on course for a landslide victory at Holyrood, women make up 30 out of 73 constituency candidates (41%). This represents a substantial increase from 2011 (up from 29%), and reflects the party’s implementation, for the first time, of strong gender quota measures in the form of all-women shortlists (AWS) in constituencies with retiring incumbent SNP MSPs. In the run-up to the 2016 elections, AWS have been implemented in nine seats with an incumbent SNP MSP stepping down; six of these retiring MSPs are male and three are female. The party also voted in favour of ‘softer’ gender-balancing measures, including the aim that in any constituency in which more than one candidate is nominated, at least one candidate must be a woman – although this measure does not appear to have been applied in all cases.

The SNP’s numbers are particularly significant given that they have been achieved in the context of fierce intra-party competition for constituency seats as a result of the party’s electoral success and rising membership. In a new trend for the SNP, this has seen a number of incumbent SNP MSPs challenged in internal selection processes, a number of whom were subsequently de-selected (including Nigel Don in Angus North and Colin Keir in Edinburgh Western). Given the overwhelming success of the SNP in 2011 and its projected advancement in 2016, plus the high level of incumbency in the party, this marks the last chance in the foreseeable future for the party to bring a significant number of new faces to its benches and, thus, make a real dent in its gender imbalance.

Turning to Labour, 41% of the party’s constituency candidates thus far are women (though, at time of writing, most of the party’s selections have not yet been completed). The party has taken steps to meet its pledge that 50% of its new candidates will be women – announcing, for example, that AWS will be implemented in the seat of Greenock and Inverclyde, where incumbent Labour MSP Duncan McNeil is stepping down. However, with polls predicting that Labour will win few constituency seats, the regional lists will be the main arena for internal party competition. With list selections not due to take place until January 2016, it remains to be seen as to how this 50/50 policy will be applied on the lists and how the all-important ranking of candidates will be conducted.

For all of the parties, what matters is not only how many women they select overall, but also whether these women actually have a change of winning. Our research found clear gendered patterns of candidate placement in previous Scottish Parliament elections, with women candidates, for example, generally placed in lower positions on party lists. At time of writing, the SNP, the Scottish Liberal Democrats and the Scottish Greens have completed their regional list selections for Holyrood. For all three parties, 50% or more of the top three positions on the eight regional lists are occupied by women.

There are significant differences, though, in how these numbers shake out in practice – for the Greens and the SNP, a woman tops four out of eight lists (50%), while only one of the Liberal Democrats’ eight lists is topped by a woman (and this is not a list that the party won seats through in 2011). Controversially, the Lib Dems have effectively de-selected their only female MSP Alison McInnes, by ranking her second on the North East Scotland list behind former MSP Mike Rumbles, whose stance on domestic violence has drawn significant criticism. In response to these developments, party leader Willie Rennie has announced that he will put forward proposals for gender equality measures to the 2016 spring conference – though the question is whether this is ‘too little, too late’ for a party that continually raises the possibility of gender quotas, only to fail to follow through, and that (after 2016) will likely be men-only both north and south of the border.

Meanwhile, for the Conservatives, women make up only 15% of the constituency candidates selected thus far.  The party has not yet completed its list selections, but, as candidates cannot stand solely on the list without also contesting a constituency seat, the lists are set to reflect the same proportions.  The placement of women candidates on these lists is therefore critical.

Beyond a matter for parties?

The 2016 Scottish Parliament elections mark an exciting time for gender equality in Scottish politics. The past year has ushered in change from the top down, through party rules, and the bottom up, through the civic awakening that accompanied the referendum. This groundswell of political engagement, funnelled through new campaign groups and, more recently, party membership, has empowered many ordinary citizens, including women. Indeed, the shift has seen many women make the transition from ‘small p’ to ‘big P’ Politics, with several members of Women for Independence so far selected as candidates to contest the 2016 elections – including six constituency candidates for the SNP and four list candidates for the Greens (at time of writing) – raising the possibility of a cross-party women’s caucus in the fifth parliament.

Experience has shown, however, that such gains should not be taken for granted or seen as irreversible. Analysis of the candidate selections so far already points to uneven performance between the parties in terms of women’s representation, and, even for those parties that have implemented gender quotas, there is significant room for manoeuvre in how they interpret and enforce the rules.

If gender equality is something we take seriously as a society it can no longer be left to the discretion of political parties. For real and lasting progress, warm words must be backed up with statutory measures to embed equality in our political institutions. And now is the time.

Note: this post was originally posted on the Democratic Audit – Scotland blog. It represents the views of the authors and not those of the British Politics and Policy blog nor of the London School of Economics. Please read our comments policy before posting.

Meryl Kenny is Lecturer in Politics (Gender) at the University of Edinburgh and Co-Convenor of the PSA’s Women and Politics Specialist Group. She tweets from @merylkenny

Fiona Mackay is Professor of Politics and Dean and Head of the School of Social and Political Science at the University of Edinburgh. She co-convenes the Gender Politics Research Group at Edinburgh, which hosts the blog genderpolitics@edinburgh (@genderpol on Twitter).

Cera Murtagh is a PhD candidate in Politics and International Relations at the University of Edinburgh. 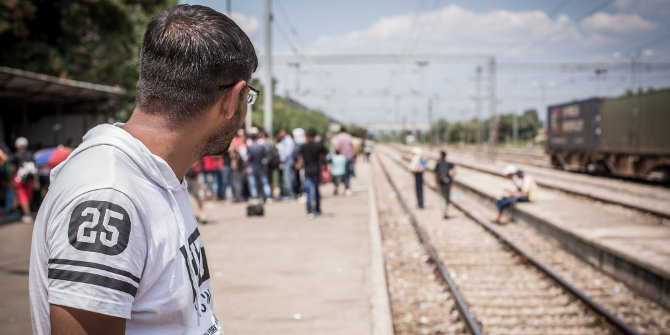