In the highly uncertain world created by the UK planning system’s decision-making method, employing an architect who has already won a lifetime achievement award – and whose work thus has the imprimatur of ‘iconic design’ – can get a London developer a valuable extra 19 floors on a representative site. Paul Cheshire and Gerard Dericks explain the costs to society of these incentives to ‘game’ the system.

Property is very local – and one result is that everyone everywhere tends to assume that the way their rules regulate development (or tax it) are the universal norm, more or less determined by nature. But of course, the reality is different. Rules and the way they are imposed are also very local – and a peculiar feature of the UK’s planning system is that we make decisions by something called ‘development control’.

This means that the proposer of any project legally defined as ‘development’ needs to apply to a committee of local politicians who can say yes or no. In making their decision, they are guided by the local plan (when there is one) but frequently ignore it and the advice of their professional planners. If the developer thinks they may have a chance of overturning the initial decision, then they can go to the quasi-judicial process of appeal. Even after that, they can make a further appeal to the Secretary of State.

All this costs a lot of resources and the further a developer pursues the case, the more it costs. But its most important cost is a kind of ‘dark matter’, invisible to scrutiny: the cost of the resulting uncertainty and extra delay. The uncertainty is translated into an additional ‘risk premium’, which means that the more uncertain the ultimate decision is, the higher the expected rate of return on the project will need to be for it to be worthwhile. In reality, this means that less is built because a whole tranche of projects get ruled out. This probably applies differentially to bigger projects because decisions on these are even more uncertain.

As earlier research has shown, our planning system imposes tight constraints on the supply of office space in UK cities. Put together, these facts mean there is a big potential payoff to developers if they can ‘game’ the system to get permission for a project otherwise likely to be rejected. The uncertain process of development control gives them scope to do this.

In new research, we demonstrate at least one mechanism they can use. This is to employ what we call a ‘trophy architect’ (TA) – someone who, before applying for permission to build, has won a globally recognised lifetime achievement award. To investigate the impact of employing a TA, we collected a wide range of information about 515 office buildings and 625 sales between 1998 and 2011. Because of various binding planning restrictions, it is absolutely impossible to build really tall buildings in most of central London – they can’t be in conservation areas (which cover three quarters of Westminster and half of both Camden and Islington); they can’t be where there is a listed building; and they can’t block one of the many protected sightlines to St Paul’s Cathedral, the Monument or the Tower of London.

So it is not surprising that London’s skyscrapers appear in apparently rather random locations. The other thing to note is that there are very few of them. Per resident of Chicago, which some might think of as the home of both the skyscraper and modern architecture, there are nearly 16 times as many skyscrapers as in London. But a quarter of London’s tall buildings are designed by TAs compared with just 3% in Chicago and none at all in the flexibly regulated city of Brussels. 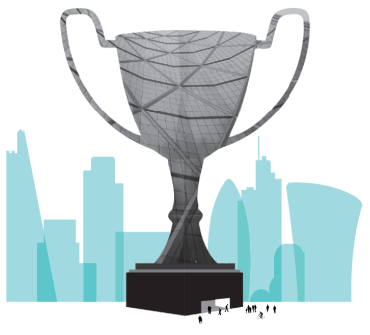 What we find when carefully controlling for all other factors that influence the size of buildings is the power of TAs to bend London’s planning system. Provided the site is not in an absolutely height-restricted area, employing a TA gets the developer an extra 19 floors: a 27-floor building on average compared with the eight storeys of buildings designed by conventional architects.

The selling price per square metre is not increased by using a TA (rents may be slightly higher but TA buildings seem to take longer to rent out and have more special rent deals and higher maintenance costs) so there is no evidence that commercial users put a special value on the design. But of course, the extra rentable space means that the value of the site is hugely increased. Allowing for the extra construction costs associated with TA design, on an average site in the City, the TA adds around £73 million (130%) to estimated site value.

At first sight, this looks like a staggering profit. But most economists tend to assume there are very few large denomination bank notes lying around on city streets waiting to be picked up. So a more plausible interpretation of this figure is that it is a glimpse of that dark matter of ‘rent acquisition by design’: the underlying but not really visible costs of having a decision-making system so uncertain in its outcome that it is worth risking a fortune to game it and get more space when you are successful.

As the then Secretary of State, John Prescott said in 2003 when over-ruling the planning inspectors to give permission to build the Shard:

“(I) will only approve skyscrapers of exceptional design. For a building of this size to be acceptable, the quality of its design is critical… the proposed tower is of highest architectural quality.”

And he knew this was true because the designer was a TA. What a waste of resources this suggests is going on. As Anne Krueger showed in her famous article on ‘rentseeking’ 40 years ago, rent acquisition of this type represents a ‘deadweight loss’ to society.

It is not even that our data suggest there is any social payoff from TA design although we cannot prove there is none: tourists might value their iconic design even if their owners apparently do not – except of course as a gambler’s way of maybe getting those valuable extra 19 floors.

Paul Cheshire is professor of economic geography at LSE and a SERC researcher.

Gerard Dericks is a SERC research associate based at the Smith School of Enterprise and the Environment at the University of Oxford.