When things go wrong, it is always handy to blame foreigners and currently even the liberal press are blaming them for our crisis of housing affordability. The problem is not 50 luxury houses empty on London’s Bishops Avenue (as The Guardian reported in January) or foreign speculators buying luxury flats to keep empty in London. It is that we have not been building enough houses for more than 30 years – and those we have been building have too often been in the wrong place or of the wrong type to meet demand.

For example, twice as many houses were built in Doncaster and Barnsley in the five years to 2013 than in Oxford and Cambridge. Even that was better than the most distant date for which there are data on all four places, 2002/03: then, the northern cities managed nearly three times as many houses as the prosperous southern pair. Policy has been actively preventing houses from being built where they are most needed or most wanted – in the leafier and prosperous bits of ex-urban England.

In the 19 years from 1969 to 1989, we built over 4.3 million houses in England; in the 19 years from 1994 to 2012, we built fewer than 2.7 million. In 2009, the National Housing and Planning Advice Unit (which was set up as an independent technical source of advice in the wake of the Barker Reviews of housing supply and planning) estimated that to stabilise affordability, it would be necessary to build between 237,800 and 290,500 houses a year.

On a conservative estimate, that implies building 260,000 houses a year, which over 19 years would mean a total of over 4.9 million. Taking the difference between actual building between 1969 and 1989 and the advice unit’s estimate of necessary annual building, this implies that between 1994 and 2012, building fell short of what was needed by between 1.6 and 2.3 million houses.

This is what explains the crisis of housing affordability: we have a longstanding and endemic crisis of housing supply – and it is caused primarily by policies that intentionally constrain the supply of housing land. It is not surprising to find that house prices increased by a factor of 3.36 from the start of 1998 to late 2013 in Britain as a whole and by a factor of 4.24 over the same period in London.

As Figure 1 shows, this is a really longstanding problem. Discounting inflation, house prices have gone up fivefold since 1955. But the price of the land needed to put houses on has increased in real terms by 15-fold over the same period. 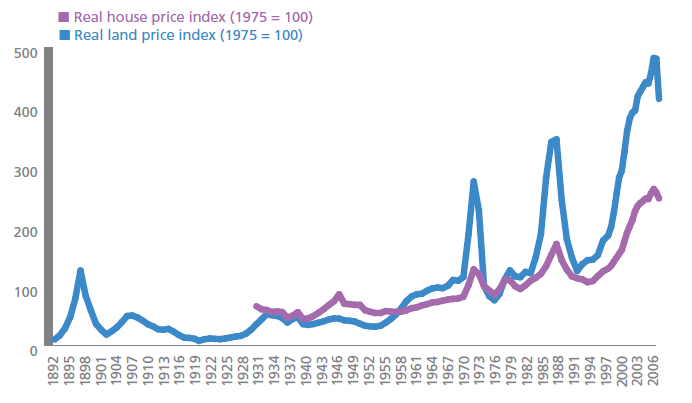 Land is an input into housing. What developers will pay for it directly reflects the difference between construction costs and the expected price of the houses that can be built on it. Of course land can be substituted out of production – and it is. That is why new houses in England are not only some of the most expensive but also the smallest in the developed world.

But it is not possible to eliminate land from house construction altogether. Moreover, people value land directly as space – in living areas and gardens. Not only is ‘space’ a normal good, the demand for which rises as real incomes rise, it is particularly valued as people get richer. They do not want to buy more beds but bigger beds and bigger bedrooms, maybe a spare bedroom; they want a bit of garden and off-road space to park their car. Estimates suggest that a 10% increase in incomes leads people to spend about 20% more on space in houses and gardens.

It is true that rising real house prices mean that house owners feel richer. That was the political motivation for the ‘Help to Buy’ scheme. But what rising house prices also mean is that young people will have to wait even longer to get any house at all, never mind a decent house with a bit of garden, and the quality of housing falls because houses become ever smaller as land prices are bid up.

What also happens – and this is central to our ‘blame the foreigners and speculators’ scapegoating – is that houses are converted from places in which to live into the most important financial asset people have; and the little land you can build them on becomes not just an input into house construction but a financial asset in its own right.

In other words, what policy is doing is turning houses and housing land into something like gold or artworks – into an asset for which there is an underlying consumption demand but which is in more or less fixed supply. So the price increasingly reflects its expected value relative to other investment assets. In the world as it has been since the financial crash of 2007/08, with interest rates at historic lows and great uncertainty in global markets, artworks and British houses have been transformed into very attractive investment assets.

Figure 2 tracks an index of global art prices against house prices since 1998. They move pretty closely together and the price growth of both hardly faltered with the 2007/08 crisis; but the price of houses has risen faster. At least one reason for the outperformance of houses is that while artworks may generate pleasure, they generate very limited income. Houses, however, provide more obviously marketable pleasure in the form of ‘housing services’ – we can live in them or rent them out. 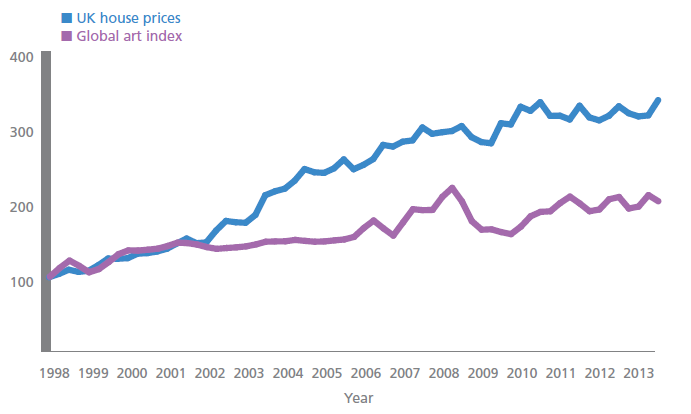 The more tightly we control the supply of land and houses, the more housing and housing land become like investment assets. In turn, the stronger the incentives for their owners to treat them as an option to hold in the expectation of future price rises.

So to blame speculators for housing shortages and rising prices is simply incorrect. It is our post-war public policy that has converted a good that is in principle in quite elastic supply into a scarce and appreciating asset. We can see this from the behaviour of housing and land prices before we imposed our constraints on land supply in the mid-1950s. We can also see it from housing markets – such as Switzerland or Germany – where policy ensures adequate housing is supplied.

Cities expanded at historically unprecedented rates in Britain during the nineteenth and early twentieth centuries, but urban land was not in restricted supply because new transport – commuter rail, trams, London’s underground and then arterial roads – opened up land as it was needed. This was stopped by the 1947 Town and Country Planning Act, which expropriated development rights, invented a new legal definition of development so that any change of use required specific ‘development’ permission, and imposed urban containment policies with ‘greenbelts’ (see my work on this here).

Additional barriers to building houses come from our pattern of government, how our local fiscal system interacts with property taxes and our insistence on using ‘development control’ (which requires any legally defined development to get specific permission from the local planning authority) rather than a rule-based system (as in continental Europe or the United States, where there are plans covering local communities and as long as a development conforms to these, it can go ahead). Details on these arguments are in a new book that brings together the wide range of work by the Spatial Economics Research Centre (SERC) over the past seven years.

Supporters of urban containment policies argue that Britain is a small island and we are in danger of ‘concreting it over’. But this is a myth: greenbelts in fact cover one and a half times as much land as all our towns and cities put together. Figure 3 shows the boundaries of England’s greenbelts with the urbanised areas they surround. 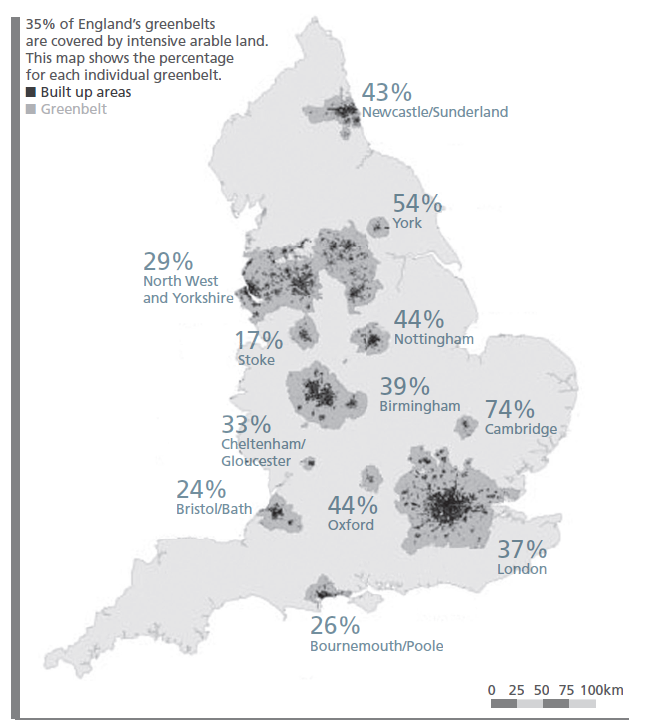 Note: This map was prepared by Sevrin Waights. Calculations are based on Land Cover Map 2000. Intensive arable land was defined as use categories 4.1, 4.2 and 4.3 and so is a conservative estimate of ‘intensively farmed agricultural land’.

Moreover, our towns and cities are far greener than greenbelts: not only is the biggest land use within them parks and gardens, but they also provide far richer biodiversity than intensively farmed land. Just less than 10% of England is built up, but gardens cover nearly half that area (see the Foresight Land Use Futures Project). In contrast, the most important land use in greenbelts is intensive arable (74% in Cambridge), which generates negative net environmental benefits (See the 2011 UK National Ecosystem Assessment).

So the second myth about greenbelts is that they are ‘green’ or environmentally valuable. They are not because intensive farmland is not. Moreover, there is little or no public access to greenbelt land except where there are viable rights of way. Greenbelts are a handsome subsidy to ‘horseyculture’ and golf. Since our planning system prevents housing competing, land for golf courses stays very cheap. More of Surrey is now under golf courses – about 2.65% – than has houses on it.

The final myth about greenbelts is that they provide a social or amenity benefit. The reality is that a child in Haringey gets no welfare from the fact that five miles away in Barnet, there are 2,380 hectares of greenbelt land; or in Havering another 6,010 hectares.

What SERC research has shown is that the only value of greenbelts is for those who own houses within them. What greenbelts really seem to be is a very British form of discriminatory zoning, keeping the urban unwashed out of the Home Counties – and of course helping to turn houses into investment assets instead of places to live.

So the solution to our crisis of housing affordability is not to blame speculators or foreign buyers but to sort ourselves out. We need to allow more land to be released for development while protecting our environmentally and amenity-rich areas more rigorously than we do at present.

Building on greenbelt land would only have to be very modest to provide more than enough land for housing for generations to come: there is enough greenbelt land just within the confines of Greater London – 32,500 hectares – to build 1.6 million houses at average densities. Building there would also reduce pressure to build on playing fields and amenity-rich brownfield sites such as the Hoo Peninsula and improve the quality of housing.

Moreover, instead of workers in central London having to jump across the greenbelt to find affordable space as they do at present (a Greater London Authority study shows that London’s higher skilled workers travel in significant numbers from all over southern England, as far away as Norwich or Bournemouth), they could have easy daily commutes – so reducing carbon emissions.

Note:  This article was originally published by the Centre for Economic Performance and gives the views of the author, and not the position of the British Politics and Policy blog, nor of the London School of Economics. Please read our comments policy before posting.

Paul Cheshire is Professor Emeritus of Economic Geography at LSE and a SERC researcher.