Ben Margulies discusses the recent reactions of Conservative MPs and Brexit supporters to Joe Biden’s comments against any US-UK trade deal that would jeopardise the Good Friday Agreement. He writes that, while such figures often invoke the issue of UK ‘sovereignty’, what they really seem to want is some sort of godhood.

On September 16, Joe Biden stated on Twitter that he would not support any US-UK trade deal that threatened the Good Friday Agreement; he also stated that he would not tolerate a hard border on the island of Ireland. Biden was referring to the Johnson government’s recently announced plans to endow UK ministers with the ability to abrogate sections of the UK-EU Withdrawal Agreement as they apply to Northern Ireland. The fear is that the UK and EU will fail to seal a trade deal, and the UK will not honour theWithdrawal Agreement’s requirements that Northern Ireland remain within the EU’s customs jurisdiction. This would force the EU to erect a customs barrier on the land border in Ireland, which many see as a threat to the Good Friday Agreement.

Biden’s words echoed those of Nancy Pelosi, Speaker of the House (and leader of the Democratic Party in the House of Representatives). Biden’s tweet linked to a letter jointly signed by the Democratic chairs of three committees in the House and Republican congressman Peter King. The letter stated that, ‘Many in the United States and in Congress consider the issues of the Good Friday Agreement and a potential US-UK Free Trade Agreement inextricably linked.’

That the US would reject any inner-Irish border was not unexpected. Nancy Pelosi said the US would not approve a trade deal if Britain threatened the Good Friday Agreement during an April 2019 visit to Ireland. The Guardian ran an article on UK government plans to circumvent the Withdrawal Agreement in February, and it cited sources saying that such a maneuver would scuttle a US-UK trade deal. Nevertheless, Biden’s announcements incited angry responses from Conservative MPs. Iain Duncan Smith said ‘We don’t need lectures on the Northern Ireland peace deal from Mr Biden. If I were him, I would worry more about the need for a peace deal in the USA to stop the killing and rioting before lecturing other sovereign nations.’ Andrew Bridgen, Conservative MP for North West Leicestershire, accused Biden of not having read the Good Friday Agreement (and called him ‘Sleepy Joe’, borrowing a nickname from Donald Trump). Leave.EU wrote that ‘There’s one party across the pond that cherishes the nation state and the Special Relationship – and it isn’t Biden’s!’ Nigel Farage, leader of the Brexit Party, warned that Biden would be ‘an anti-British US President’, adding, ‘Wake up everyone.’

Let’s examine the use of some of these terms. The first – as ever with Brexit – is ‘sovereignty’. Yes, the United Kingdom is a sovereign state. This means that, at least in theory, its institutions have the final and unquestioned authority to make binding law within the nation’s borders. It also means that the UK can act independently in its dealings with other sovereign states, which includes making treaties. International law exists, but since it generally depends on states to enforce it, its ability to bind a state depends on a) the willingness of individual states to make treaties binding within their own laws and b) the ability of the community of states to pressure treaty-breakers into compliance.

The Johnson government’s proposed measure is a declaration that the UK is not willing to enforce the Withdrawal Agreement, or parts thereof, in its domestic law. Sovereign states can and do disapply treaties in their own legislation. But that does not mean that other states will not try to enforce international law by pressuring the miscreant state.

Is that ‘lecturing’ the United Kingdom? Yes. States lecture one another all the time to enforce global norms of behaviour. They also do so to encourage, or even coerce, other sovereign states to change their domestic policies. To take an example: US law requires the State Department and Defense Department to cut off assistance to foreign military units engaged in human-rights abuses, unless the aid-receiving states take measures to stop abuses and/or prosecute offenders. Because the United Kingdom is sovereign, the United States Congress cannot make laws that bind UK institutions. The US is entirely free to pressure the UK to change its laws through economic and political pressure. Indeed, the US has done this before; US government financing after World War II came with conditions attached, such as the Keynes Loan of 1945 and Marshall Plan aid from 1948 (the latter required recipient states to further cooperation between European states).

Furthermore, all trade deals require the parties to change their domestic legislation. Remember, the first goal of most trade pacts is reducing tariffs, which is just another way of saying that the pacts demand each state change its tax laws to meet the terms of the pact. Trade deals often also require each state to change laws regarding treatment of foreign firms in their domestic market; consumer-safety regulations; and rules of corporate-state dispute resolution.

What many British Conservatives seem to want is not the reaffirmation of the US-UK special relationship. Rather, they want is for the United States to proclaim that its alliance with the UK is more important than its ties with Ireland, or with the European Union. Fintan O’Toole’s Heroic Failure suggests that Brexit is very much shaped by a hierarchical view of international politics, a sense that cooperation is a form of subjugation. This strain of Tory, or Brexiteer, sentiment wants the US to affirm not Britain’s sovereignty, but its superiority, by acting as a counterweight to the hated EU.

This need even extends to US domestic politics. Joy Morrissey, the Conservative MP for Beaconsfield, responded to Biden’s tweet, saying that the intervention is ‘Clearly … all about the Irish American vote.’ Paul Baldwin denigrated the Irish-American vote as a cesspool of anti-British racism in the Daily Express. This should also be unsurprising, since the Irish-American vote has played a role in US politics since the 19th century, one so prominent I learned about it in my high-school US history class. Morrissey seems to feel it is somehow illegitimate for Biden to take a stance based on that of a part of his own electorate. Not only should Biden place the US-UK alliance on a higher footing than the US-Ireland relationship; he should also deem it more important than his relationship with US citizens.

The great flaw at the core of Brexit is the desire for a sovereignty so pure it not only frees Britain from any constraints on its domestic law-making, but also exempts it from the ordinary rules of international relations. The Conservative Party and its pro-Brexit allies want a trade deal with the EU but seem at best reluctant to bind themselves to any agreement, citing ‘sovereignty’. They want a trade deal with the US, but reject the conditions the US has set, citing ‘sovereignty’. The problem is that there is no such absolute sovereignty; the word just means the right of a nation to make its own decisions without direct external interference. It does not mean that other nations cannot use their sovereignty to pressure their counterparts to change their foreign or domestic policies. It does not mean that one can excuse oneself from the rules that smooth the relations between sovereign states. What these Brexiteers seem to want is not political sovereignty. It is some sort of godhood.

Ben Margulies is an independent researcher and former lecturer at the University of Essex.

Photo by Jordan McDonald on Unsplash. 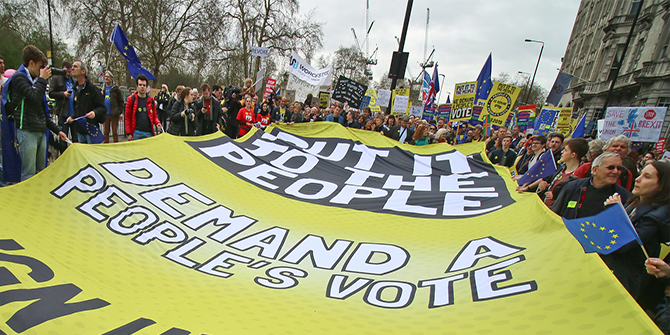