Much of the recent public outcry over the phone hacking scandal has been over the relative unaccountability of News International and its apparently close ties with politicians and the police. David Beetham argues that this influence extends to the whole corporate sector in the UK, a sector that has an anti-public sector agenda which has become embedded at the heart of government.

The News International scandal has rightly caused public outrage and led to a sea-change in relations between UK politicians and media moguls. Yet Murdoch’s empire has been only part of a much wider structure of unaccountable power which has exercised a dominant influence over British politics and policy making in the past two decades or more. This ‘unelected oligarchy’ extends to the corporate sector as a whole, including the major financial and banking institutions.

To be sure News International has been unique in its descent to pervasive illegality to maximise sales and profits. Yet it shares the same features that have compromised British democracy from across the corporate sector. These include the use of offshore tax havens, complex legal entities and transfer pricing to minimise the tax contribution of businesses to our public services. They have shared a common anti-public sector agenda which has shaped public opinion and government policy alike: privatisation and outsourcing of government functions and services; cutting the ‘burden’ of government regulation and promoting self-regulation; lowering taxes, especially on business and the wealthy; remedying the deficit in public finances in short order. This agenda has become embedded at the heart of government through a range of corporate stratagems – personal contact with politicians, lobbying power, financing political parties and think tanks, the ‘revolving door’ between business and government appointments, joint partnerships, corporate hospitality, and so on – which have brought governments of all parties under their sway. 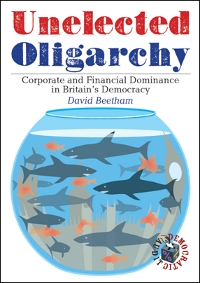 These stratagems are exhaustively documented in a new Democratic Audit paper, Unelected Oligarchy: Corporate and Financial Dominance in Britain’s Democracy, which is available on the Democratic Audit website, and forms part of a wide-ranging audit of UK democracy to be published in September. Analysis of these stratagems helps to answer a series of questions which many citizens have been asking, but which became obscured by the MPs’ expenses scandal and now again by the crisis at News International. How have we arrived at a situation where the government:

Simply put, the cost of the financial crisis has been successfully transferred onto taxpayers, and public anger displaced from the bankers onto the governments which are slavishly following their favoured prescriptions for addressing the deficit in the public finances. The latest European bailout of Greece is following a similar pattern in transferring the risk of a future Greek default from the financial institutions which have made good money from the crisis onto the shoulders of Europe’s taxpayers. The old saying ‘privatise the profits, socialise the losses’ is being fulfilled in its most extreme form. We have seen this principle in operation repeatedly whenever private sector management of a public service runs into difficulty and is judged unprofitable, or when the cherry-picking of profitable parts of a public service leaves the remainder financially unviable. It is the taxpayer who foots the bill for putting things right, and paying the cost of corporate incompetence or profligacy.

Now it can be argued, and indeed has been, that the scandal of News International has shown Britain’s democracy to be in good working order. Public opinion has been energetically aroused and effective, Parliament has responded with timely debate and cross examination, senior police officers have resigned and public enquiries have been set up to investigate thoroughly and propose reforms. Yet the crassness of the illegalities exposed in the News International affair has been wholly exceptional in its systemic character and in the universal condemnation it has prompted. And it serves to distract attention, as the MPs’ expenses affair did, from the ongoing embrace of the corporate world by politicians, of which their toadying to Murdoch has been such an egregious example.

The same bankers who are lobbying fiercely to water down the forthcoming Vickers report on banking reform provided half the funds for the Tory 2010 election campaign, and have intimate links with the UK Treasury. The private health firms which still expect fat contracts from Lansley’s NHS ‘reforms’ have funded Tory think tanks and research projects, and have close links with the Ministry of Health. The power of electoral opinion and public voice is tiny when compared with this well-oiled inside track. The democratic principles of popular control and political equality have never been further from realisation in modern times than in Britain’s democracy today.

This article first appeared on the Democratic Audit blog on 26 July.

The online distribution model is poised to become a significant source of income for the UK creative sector, but there remains many copyright issues to resolve