Despite voter identification being justified as necessary to tackle voter fraud when the new Elections Bill was first announced, Ana Alonso-Curbelo finds both Conservative and Labour MPs agree voter fraud numbers are small. Conservatives nevertheless significantly frame voter ID as necessary to strengthen public confidence in the electoral system, which contrasts Electoral Commission’s 2021 data instead finding 90% of the public consider voting to be safe from fraud at the polling station.

In 2021, the Conservative government announced a proposal to introduce mandatory voter identification in elections from 2023. This policy, which requires voters to show a specific form of identification at polling stations, is part of the new Elections Bill, designed ‘to strengthen the integrity of the electoral process’ and currently awaiting the 3rd and final reading in the House of Lords.

However, research has found in-person impersonation fraud – which is the only form of electoral fraud voter ID can prevent – is extremely rare in the UK. In the past seven years, there have been only three convictions of voter impersonation.

Unlike most countries where ID is required to vote, Great Britain has no free or low-cost ID option, so ever since voter ID was put on the policy agenda, concerns have been raised around whether asking voters to show a specific form of identification to cast their ballot might make it harder for certain people to vote. This is especially the case for the elderly, people with disabilities, people from ethnic minority backgrounds and those who are less well-off, all of whom are statistically less likely to own a photo ID.

Government-commissioned research found that 2% of people don’t have any form of photo ID (including expired or unrecognisable) and 4% don’t have recognisable ID (roughly 2.1 million people). The Electoral Reform Society also notes that obtaining free electoral ID cards involves prospective voters having to take time off work and caring responsibilities to travel to council offices during opening hours to request them. Those that can most easily do this are usually the most likely to have ID already. This led representatives of major opposition parties to send a joint letter to the Cabinet Office minister where they described implementing ID requirements as ‘a blatant attempt by the Conservatives to rig the result of future elections’.

Faced with this lack of evidence of voter fraud to justify voter ID, and its concerning potential impact on voter turnout, I looked at how MPs in Parliament debate this controversial policy. Below is one of the study’s outputs, a keyword analysis which compares words more frequently used by Conservative MPs when debating voter ID compared to Labour MPs. While Labour’s key words such as ‘suppression’, ‘barrier’, and ‘disproportionate’ point towards the potential negative effects of a voter ID requirement, Conservatives top two words are ‘system’ and ‘confidence’. What does this mean?

Figure 1: The top 20 words with the largest statistically significant differences between Conservative and Labour MPs. 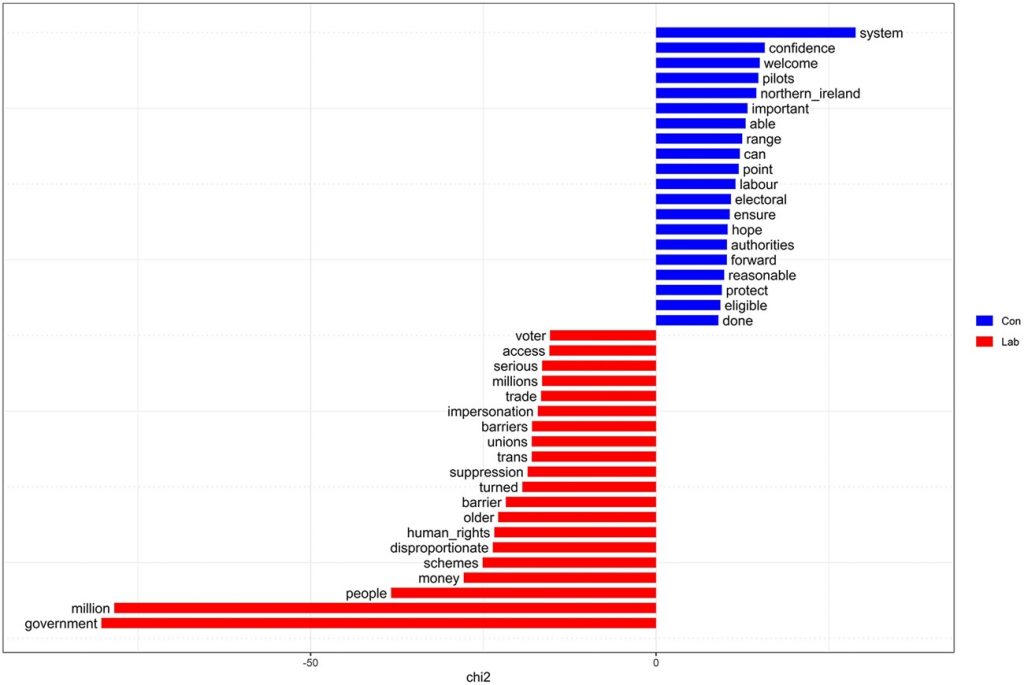 However, this hasn’t always been the case. While these debates were taking place from 2018, there was a concerning increase in people’s beliefs in electoral fraud, despite no correlating increase in cases of in-person voter fraud. 2021 was the first year in which this trend reversed. In 2021, perceptions of electoral fraud as a problem in the UK almost halved.

The Electoral Commission thinks one possible reason behind this unexpected change is that, because electoral fraud is something that most people don’t directly experience, news media can be a source of influence, so perhaps the absence of widespread elections in 2020 and accompanying media coverage could help explain this shift. Research on the USA, where voter ID laws have been increasingly implemented across Republican states over similar concerns around voter fraud, shows that party elite cues transmitted through the media influence public trust in the electoral system, especially among Republican voters. The Electoral Commission further speculates the situation in the US could be another contributing factor, as allegations of widespread voter fraud by Donald Trump at the US presidential election were widely dismissed in the UK.

This highlights the complexities of justifying policy based on public opinion data, without understanding how these opinions are formed in the first place, or how they are affected by policy changes. Voter ID requirements were actually trialed in five and then ten local authorities across England in the 2018 and 2019 UK local elections, showing mixed evidence on the effect of voter ID on confidence in those areas.

Most importantly, people in the UK do have confidence in the running of elections. Yet, despite this and an ongoing lack of evidence of widespread voter fraud, voter ID, with its potential harm to voter access, is still very much on the policy table.

Ana Alonso-Curbelo is a researcher in the School of Social & Political Sciences at the University of Glasgow. 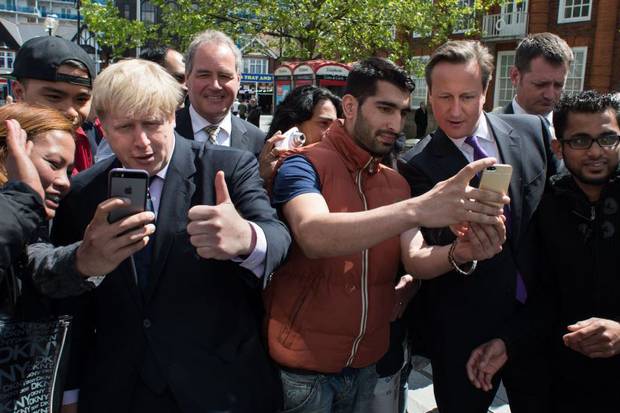