Wage growth and productivity growth: the myth and reality of ‘decoupling’

Have UK and US workers been denied their fair share of economic growth over the past four decades? João Paulo Pessoa and John Van Reenen investigate claims that wages have become ‘decoupled’ from productivity.

It is often argued that American workers are being exploited by the firms for which they work. Exhibit 1 in the case for the prosecution is that real wages of the typical worker have hardly increased in four decades while labour productivity has continued to grow steadily. In other words, the pie is growing, but capital and the very richest workers (the ‘top 1%’ decried by the Occupy Wall Street movement) have eaten it.

Recently, it has been suggested that the UK is starting to follow the same unhappy path with productivity growth outpacing wages. Is this true? Well, not really.

Have wages decoupled from productivity?

The ugly label for the phenomenon of wage growth falling behind productivity growth is ‘decoupling’ – that is, wages have become ‘decoupled’ from productivity. Basic economics suggests that workers’ real hourly compensation should grow in line with GDP per hour worked over the long run. But between 1972 and 2010, US productivity grew by 84% while median wages only grew by 21%. We call this by the even more ugly term – ‘gross decoupling’.

Is this proof that the Occupy protesters are right and that workers are being denied their fair share of economic growth? Not so fast: what basic economics focuses on is ‘net decoupling’, which is the idea that average compensation should roughly follow GDP per hour deflated in the same way. In the UK, net decoupling is basically zero: both  wages and productivity have risen by roughly the same amount since 1972. In the United States, there is a bit of net decoupling: about 13%.

So what explains this massive difference between gross and net decoupling? In the UK, it is basically two things: inequality and non-wage labour costs. First, the UK has had growing wage inequality since the late 1970s and this means that the average wage has risen much faster than the median wage (the wage that separates the population into two halves, 50% earning more than the median earner and 50% earning less).

Second, non-wage labour costs, such as pension contributions and healthcare benefits, have risen very quickly. These are all part of what is called ‘compensation’, which is what employers care about, not
just the direct cost of paying salaries.

The United States has experienced even larger increases in inequality and non-wage labour costs than the UK and these two factors account for about half of the gross decoupling between US productivity and wages. But in addition, there is a growing divergence between the GDP deflator and the consumer price deflator with the GDP price deflator rising much more slowly than measured consumer prices (which implies that profit margins are rising). This is much less true in the UK, although recent Office for National Statistics (ONS) data revisions may increase this component.

No one has quite figured out why this is, but it is probably related to the fact that the prices of investment goods related to information and communications technologies (ICT) – servers, networks, enterprise software and the like – have fallen faster than measured consumer prices of ICT goods. Different measures of consumer prices make the inflation contribution to gross decoupling fluctuate between six and 30 percentage points in the United States.

Breaking it all down

Looking at particular sectors of the economy, three are striking in terms of decoupling. First, non-market services (public services, such as administration, education, health and defence, as well as private education, health and social work and real estate activities) observed a surprising degree of net decoupling between 1972 and 2007 (19%). But these are sectors where output is very hard to measure.

Second, in the period up to 2007, financial and business services saw a faster growth in compensation (96%) compared with productivity (92%), which indicates negative net decoupling – that is, workers doing better than shareholders. Finally, compensation for workers in personal services (such as hotels and restaurants) grew much faster than productivity in the sector (186% compared with 76%), a massive negative net decoupling.

All this can be seen for the period 1972-2010 in Figure 1. Gross decoupling was 42% but net decoupling (the grey solid bar) was -0.8%. The purple bar is the contribution of wage inequality (16.6%) and the pink bar represents ‘benefits’ (a 16% contribution), the difference between wages and compensation. This explains most of the divergence between gross and net decoupling, with a smaller part coming from price deflators.

Figure 1: Explaining ‘gross decoupling’ – the difference between the growth of productivity and real wages (GDP per hour deflated by the GDP deflator and median wages deflated by the consumer price index) UK, 1972-2010 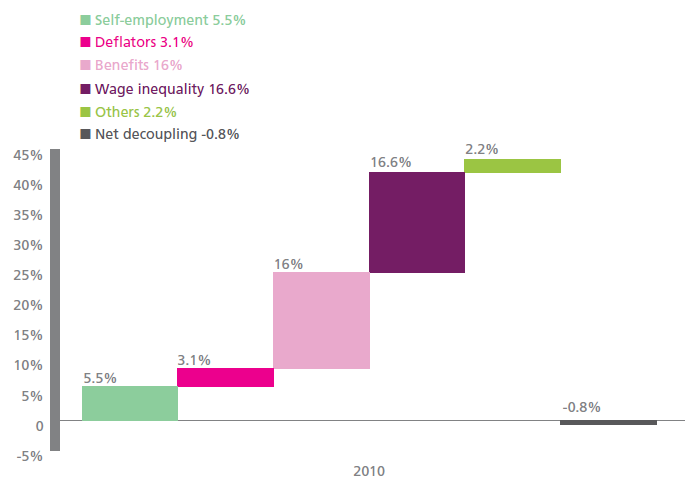 Notes: Each bar is the contribution of the different elements accounting for gross decoupling in the UK – the fact that GDP per hour deflated by the GDP deflator grew by 42% more than the growth of median wages deflated by the consumer price index.

Another way of checking these results is to look at the labour share of national income. That has basically been constant in the UK, which is consistent with our analysis (see Figure 2). If average compensation had really grown much more slowly than productivity, the share of profits in GDP would have risen a lot and the share of labour would have fallen. 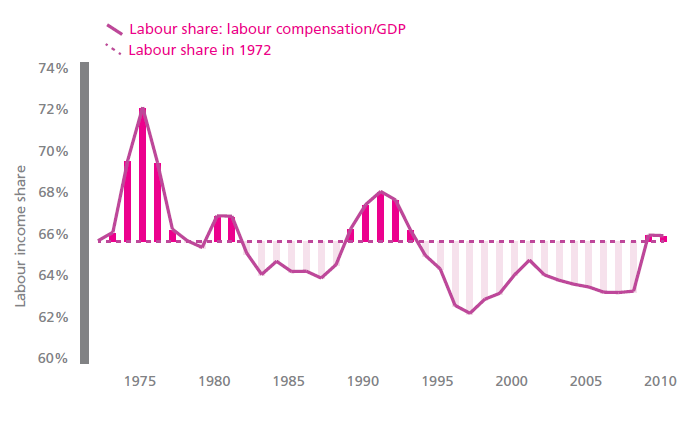 Source: ONS, OECD and KLEMS; all measures adjusted for self-employment.

Although there is variation over the business cycle, the share of income going to labour in 2010 was basically the same as it was 40 years ago. Indeed, there has been more of a fall in the labour share of income in continental European countries and Japan. This might be evidence of capitalists doing a lot better than workers in these countries whereas workers have done relatively better in the UK and the United States.

In terms of policy, the decoupling debate has shed more heat than light. Our results suggest that net decoupling has been overstated and cannot be used to justify redressing the overall balance between wages and profits.

The real problem is inequality among employees – wage inequality has risen massively since the late 1970s. In the United States, the share of income of the top 1% is 19%, higher than it has been for a century and about the same as in 1928, just prior to the Wall Street crash that ushered in the Great Depression and World War II. Although the share of the top 1% is lower in the UK, it still rose from 6% in 1979 to 15% by the eve of the Great Recession.

Economics has focused on understanding the causes of wage inequality over the last 20 years. Fundamentally, rapid technological change and the integration of low-wage economies like China and India into the global economy have increased the relative demand for more skilled workers. Improving the quantity and quality of skills for people in the bottom half of the education distribution must be the main priority for policy-makers in the UK and the United States. This will boost productivity and real wages.

This article originally appeared in the Autumn issue of CentrePiece, the magazine of the Centre for Economic Performance (CEP) at LSE and summarises ‘Decoupling of Wage Growth and Productivity Growth? Myth and Reality’ by João Paulo Pessoa and John Van Reenen, CEP Discussion Paper No. 1246.