Win or lose, Corbyn’s success adds credence to the conclusion that Britain is in the midst of its first prime ministerial primary, writes Josh Cowls. The most significant factor for this is Labour’s new voting system and its lower barriers to membership. These changes have blurred the lines between party membership and the American system of party registration.

#JezWeCan? It’s a laughable comparison, of course: the engrossing election of 2008 which brought the United States its first African-American president, at the expense of its first female one, propelled by the power of hope, change, and the unifying rhetoric of the most gifted politician the twenty first century has so far seen. Jeremy Corbyn is no Barack Obama, as even the battle-hardened North London socialist himself would probably attest. Yet as different the two men are in their background and ideology, it’s not hard to feel some similarities in their surprising insurgent campaigns, both driven in no small part by social media.

There are perhaps two major reasons for Corbyn’s surge and its potentially earth-shattering consequences for British politics. The first is circumstantial. The UK’s 2015 general election mirrors the 2004 US presidential election in instructive ways. A decidedly wobbly right wing leader roused the ground troops with unexpected efficiency to see off an antagonist perceived to be foppish and over-educated. Well-meaning left-wingers reacted in unalloyed shock, puzzled more than angry over the general electorate’s unexpected shift rightwards and in favour of the status quo.

The 2004-2008 experience for American Democrats – which culminated in the nomination and election as president of Barack Obama – is instructive for the next five weeks, and potentially the next five years, of Britain’s Labour Party. But the comparison is meaningful only because of the second, structural factor in Corbyn’s rise. Labour’s last election in 2010 brought to the helm Ed Miliband, someone who the electorate hinted in poll after poll, only to confirm in the election itself, wasn’t up to the job. Miliband had only been able to see off his more centrist brother David with the support of the unions, who at the time enjoyed a 33% weighting in the electoral college, alongside a third each for Labour’s parliamentary party and its general membership, both of whom plumped for David.

The change to the way in which the Labour Party elects its leader is the structural reason behind Corbyn’s surge. After 2010, the tripartite division of voting rights was replaced with a simple one member, one vote system (albeit incorporating the Alternative Vote system of multiple preferences when more than two candidates stand). The parliamentary party still retains some sway, since candidates require 35 signatures from their fellow MPs to make it onto the ballot. In an irony deep enough to make future historians marvel, Corbyn’s candidacy only received the requisite signatures minutes before the deadline, propelled in no small part by MPs who wanted “a proper debate” amongst leadership contenders from across the party’s ideological spectrum.

Not merely the new, more egalitarian voting system, but also the party’s rather cheap membership (starting at £1 for the right to vote in the leadership election) has suddenly given a whole lot of people, many of them young, their first opportunity to elect a party leader. And who are they choosing? If the polls are to be believed (though we’ve heard that one before), the curmudgeonly Corbyn – who sits far to the left of his party, let alone the general electorate.

Or does he? It turns out that on an issue-by-issue basis, Corbyn’s policies – including rent controls, the renationalisation of the railways, and far higher rates of income tax on the super-rich – poll pretty well with a British population sick of the exorbitant cost of living and rampant privatisation. Yet the most significant aspect of Corbyn’s rise isn’t the nitty-gritty of policy alignment but the distinctiveness of his character and his campaign. Corbyn carries the perception, not without founding, that he knows what he thinks and says so. There are certainly aspects of his personal character that appeal: he was the one of the lowest-claiming MPs during a decade dogged by the expenses scandal, and shares the quirk of his Hellenic comrades of getting through life without wearing a tie.

More broadly, Corbyn seems to represents the antithesis of the Brylcreem Boys who have led mainstream British parties for the best part of two decades. Educated at London Metropolitan University in contrast to his Oxbridge-alumni rivals; free of the centrist excesses of the Labour era, not merely the Iraq invasion but also on university tuition fees; free enough, even during the current campaign, to vote against the Tory Government’s welfare bill while his rivals performed various volte faces. Throw into the mix the British public’s perennial affinity for an underdog and you have a candidate that genuinely stands out from the rest.

Win or lose, Corbyn’s success adds credence to the conclusion that Britain is in the midst of its first prime ministerial primary. It certainly bears many of the hallmarks of the American equivalent, including TV debates and mass(-ish) rallies – phenomena not exactly new to UK politics but still quite foreign-feeling. But clearly the most significant factor is Labour’s new voting system and its lower barriers to membership. These changes have blurred the lines between party membership, which even at its height commanded only a small slice of the British electorate, and the American system of party registration, which, though varying state-by-state, generally allow voters some degree of flexibility in terms of which party to vote for from year to year.

The American nomination process, through its system of primaries and caucuses, commands enormous attention and engagement; the dramatic 2008 race attracted 27% of eligible voters to the polls for that year’s multi-state ‘Super Tuesday’ election. We even have the first evidence of mischievous Tory sympathisers “spiking the football” and backing Corbyn in the hope of keeping a newly leftward Labour party out of office, a long-running tactical phenomenon in the US.

From a democratic standpoint, there is lots to cheer here. Getting many more ordinary people engaged in the political process is something all parties should aspire to, and though the scale of participation in the Labour leadership contest is still an order of magnitude smaller than the US primaries, the excitement (and incredulity) whipped up by the process will – like the SNP’s post-referendum successes – not be quickly forgotten. But the primary system undoubtedly comes with a flip-side, perhaps best characterised at the moment by outspoken billionaire Donald Trump. Though at an early stage of the presidential race (absurdly early, when you consider that the new President will not be sworn in until January 2017), Trump tops polls of the Republican party, much to the barely-concealed despair of the Republican Party, which is rather redolent of the hand-wringing of many mainstream Labour commentators who cut their teeth in the Blair era. The reason for discomfort in both cases is the perception that these front-runners, though popular with the party faithful, would likely be unelectable in a general election due to the extremity of their views.

The worrying thing for Labour grandees is that while the US primary process is so gruelling that a more moderate candidate eventually wins out through sheer attrition – Mitt Romney saw off a fully-stocked carnival float of putative front-runners before winning in 2012, and John Kerry overcame initial excitement over Howard Dean to pull through in 2004 – there are no such safeguards in the nascent Labour primary system. The one-off election is only days away, and a glance at the betting odds suggests Corbyn is in a very good position to pull off an astounding victory.

An interesting question, then, is which model Corbyn’s candidacy most resembles: the Trump campaign, building up a head of steam by being the most distinctive and populist before his sheer unelectability brings prudent voters to their senses, or the Obama campaign, turning initial excitement and energy into a far broader, more plausible programme for leadership of party and ultimately country?

It’s too soon to tell. The safe money is still on the former case: that Corbyn is the Trump of the British left wing, who, if and when he pulls off a remarkable victory in the leadership contest, would be felled soon after by a coup or at worst a shattering but inevitable general election defeat. Perhaps, instead, the only thing that recent British politics has reliably if reductively taught us is to expect the unexpected.

Yet what is clear is that Britain is in the midst of its first prime ministerial primary, one in which sheer popular support will award the mantle of leadership to a candidate initially written off by the media and lacking the support of much of his own parliamentary party. And while the Labour Party is proposing firmer checks on who can join and vote in its elections, in the long run it would be both easier and more democratic for parties to attract rather than disenfranchise potential voters. The election of Jeremy Corbyn would cause shockwaves across Westminster and beyond, but in the longer term, the manner of his election may be even more consequential for British politics than the fact of it.

Note: A version of this article originally appeared on Josh Cowls’ personal blog.

Josh Cowls is a Research Assistant at the Oxford Internet Institute, working to increase understanding of the promises and pitfalls of big data for social science research. Josh’s background is in researching political science questions in online contexts and working on political campaigns in the US and UK. He tweets @JoshCowls 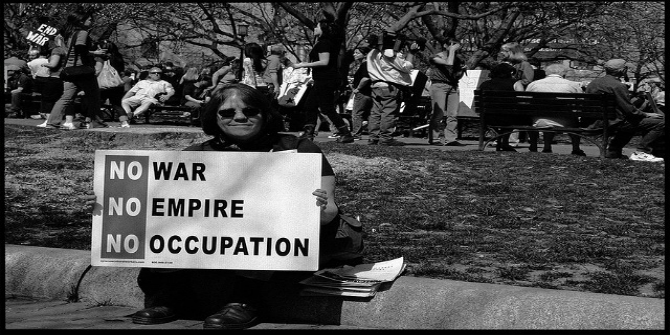