Danny Dorling reflects on the Great British Class Survey and the public debate it has generated. He outlines some of the challenges that have been raised about the underlying research before discussing the media debate it sparked and the telling fixation on cultural class which characterised it.

You should be wary of on-line calculators that allow you to type in your political preferences and then tell you which party you should vote for in any given election. Any political party with enough resources and few scruples could employ an ‘app’ designer to produce a result which suggested that, almost no matter what your own personal political views were, you should vote for them.

As spring finally sprung in April 2013 an on-line calculator of a different kind was released. Rather than tell you how to vote, it purported to reveal the social class you belonged to. It was produced by the BBC in collaboration with a diverse group of sociologists. The sociologists had done their best to rectify what they instantly recognised to be a highly biased sample of over 160,000 public responses. Partly because of the size of their survey, but mainly because of the involvement of the BBC, a remarkable amount of coverage resulted and a great deal of comment was made. Typical exchanges at the elite end of the British media were often comical.

One Today programme presenter (Evan Davis), when asked how he fared in the survey, replied: “I’m sorry, I was actually in the Elite category”, his inquisitor, Jonathan Dimbleby, consoled him by replying: “It’s horribly easy to get into the Elite category if we are ‘fessing up’”. If this were a commentary on linguistics it would be worth pointing out that the language used here is quite Elite English, and it does confirm some of the sociologists’ observations that the Elite are now more tolerant when it comes to issues such as language and accent – for instance often using what used to be thought of as popular slang, such as ‘fessing up’.

But is it so ‘horribly easy’ to be Elite? Were Jonathan Dimbleby and Evan Davis right to reassure each other that they were somehow normal on that BBC Radio 4 Today program? Jonathan is best known for being part of an elite trilogy, his father being Richard and his brother being David. Perhaps he considers himself a little less posh than them? Jonathan Dimbleby and Evan Davis were no ordinary pair of blokes. Move in their circles and it is horribly easy to get into the Elite category, at least if you filled in that on-line calculator. Their comments were partly so candid because they came at the end of a week when the British press were transfixed with questions of class.

The ‘Class Test’ was released by the BBC on Wednesday April 3rd. The week ended with ‘Class War’. It was the week, if you remember it, when by Friday April 5th George Osborne, a former Bullingdon club member and future (hereditary) Baronet, was blaming a ‘benefit culture’ for subsidizing lifestyles like that of Mick Philpott who set fire to his home and killed six of his seventeen children. By the Saturday Lord Oakeshott was calling George callous and cruel. Class led the news, until Baroness Thatcher’s death was announced on the Monday. The sociologists had had their academic ‘impact’, probably to a far greater degree than even they imagined possible.

The academic article on class which began all this can be found on-line and was still available for free download at the time of writing. One of its conclusions was that: ‘the time is now ripe for a different, multi-dimensional perspective, in which occupational membership is spread (though unevenly) between different classes.’ There are now much greater differences in pay within most ‘top’ jobs, and so much hereditary wealth at the very top of society, that it is now income and wealth that matter most in determining Elite membership. If you are in a job where you are on a fixed pay-scale, then you are probably not a member of the Elite.

Little of the media commentary on the ‘Class Test’ mentioned the actual research behind the academic article which also pointed out that currently, as the social gaps get wider, people appear to try harder to hide their class backgrounds, they get more class conscious while appearing to be less class bound: ‘In particular, it has been argued that elite culture has become more liberal and tolerant as the middle and upper classes have become more ‘omnivorous’, keen to partake of both highbrow and popular cultural forms.’

The most interesting finding from the academic article was that the Elite are more than 50 times more likely to fill in the online BBC survey than the bottom group the academics called the ‘precariat’. Here is what their seven fold division looks like: 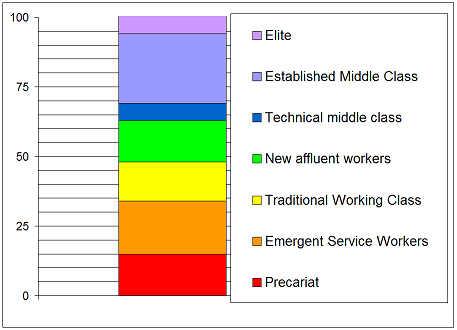 Critics of the BBC/Sociologists’ seven fold classification suggested in early April that it emerged mostly as the result of arbitrary pattern searching and is new mainly in that it tends to split the young from the old. There have been more carefully thought out seven or eight category schema produced before (not least the official NS_SEC). However, while some disagreed with their methods, others in the media appeared to bend the story what the academics found to better suit their particular slant. The Daily Mail found a pundit willing to claim that the survey ‘…also shows there is plenty of social mobility – even the Precariat can escape more easily than the working class of 50 years ago’. The survey included nothing about changes over time, and the evidence that exists from other surveys finds the opposite to be the case.

The Guardian Newspaper found a succinct writer, Richard Seymour, who criticised the work for being descriptive rather than explanatory. And an academic who claimed ‘…that somebody has more income than somebody else is not a way to define class’. However, those at the top do have a tendency to reveal themselves by expropriating more from those at the bottom, who are often most easily identified by how little they have. In 1577 the English clergyman, William Harrison, noted that what most distinguished a knight from a commoner were ‘their yearelie revenues or abundances of riches…’.

Five years ago in the New Statesman magazine I suggested that as the divides grew, income and wealth were again beginning to matter more and more. I also suggested that the Elite were much smaller than 6% and that: ‘Within the best-off 5 per cent, the top half are so much better off than the rest that they make the other half feel poor. Within that better-off half, half are so much better off that . . . and so on. It’s a recursive definition. It ends with the 0.01 per cent at the very top who worry about being kidnapped, and know that their children and lovers lie to them for their wealth.’

It is possible that some of those at the top have a developed a strong dislike for accepting the reality of their separation, not just from the rest of society, but also from those whom we might assume to be close to them. Toby Young (son of a life-peer, alumnus of Brasenose Oxford), writing that early April in the Spectator, approved of the new classification system. He put some of his thoughts into print: “I am probably among the nation’s top 1 per cent of income earners, but I don’t think there’s a great gulf between me and the remaining 99 per cent”. That is what Toby likes to think and it is helpful that he has explained it.

Writing in the Independent, comedian Mark Steel (adopted, and not into wealth) got to the crux of what appeared not to work about the new survey and why it was too reassuring to people like Toby: ‘One question the survey didn’t seem to bother asking was what job you did, although it does ask for the jobs of your friends. So if you’re a cleaner who knows some teachers, that makes you middle class for having teacher friends, but those teachers will be working class for having a friend who’s a cleaner’.

In practice it was your answers to the survey’s questions about income and wealth that largely determined the class you were put in. As far as I could tell, using the BBC’s on-line version of the Class Calculator, if your post-tax household income is over £100k you will be classed as Elite, whatever other answers you give, under £25k and you are probably doomed to the Precariat. So class at those extremes was essentially income.

It is interesting that a new social class system starts off by rejecting occupations to assess class, then, in its ‘Social Capital’ section, uses the occupations of acquaintances in its assessment. Clicking on the limited selection of occupations displays your status rising from hobnobbing with some categories, but then reduced if you are acquainted with any of the lower echelons, although you do get a higher score for variety. The Cultural Capital section divides activities into “emerging” and “highbrow”. All this reinforces stereotypes.

Guardian commentator Martin Kettle (son of communists, alumni of Balliol Oxford) concluded that: ‘All of us today are defined by what we own, or by the kind of people we mix with and by the things we are interested in, at least as much as we are defined by our day jobs. We are what we eat – as well as what we do. And the days when what we ate or how we spent our leisure were umbilically linked to the kind of work we did are going, going and nearly gone’. – Except that whether we work and how much we are paid for our work determines what we have to spend on leisure.

Finally, and for Old Labour, in the Mirror, a seasoned journalist neither born into money nor Oxbridge educated explained: “The rich and powerful, and employers with the ability to sack you are in a different league. They’re on the other side: always have been, always will be. They want to control, and exploit. That’s the real class issue, not your music tastes or TV viewing habits”.

All this might be tittle-tattle were it not that class actually matters so much. Not just whether you are in the Elite, and to whom you were born, and where you might have gone to university, but as to whether you lose sleep at night in fear over money, are shoddily housed, live in shame that you are poor and, at the extreme, cannot afford to be properly fed.

Classes are all about comparisons. Classes exist only in relation to one another. People can only go hungry in a country as rich as Britain because others are not embarrassed about paying miserable wages or attacking risible levels of benefits. The Elite worry so much about whether they are elite because, even within that group, there are huge inequalities. Below the Elite the majority struggle and should be fearful because the wealthiest minority do not have their interests at heart. But if you believe all this, what class are you?

Danny Dorling is Professor of Human Geography at the University of Sheffield and the author of ‘Fair Play’.