What the Chancellor won’t say on Thursday: The UK’s economic recovery is unsustainable

What the Chancellor won’t say on Thursday: The UK’s economic recovery is unsustainable

With positive economic news dominating headlines of late, this Thursday’s autumn statement is tipped to be the most optimistic in years. While George Osborne is likely to highlight upwardly revised growth figures he will also likely ignore that these figures are riding on the back of unsustainable household spending. With income falling in real terms, this upward growth is being fuelled through consumers dipping into their savings or borrowing more. There is still much cause for concern regarding the UK’s economic prospects, writes Joel Suss.

George Osborne will do his best to trumpet the recent wave of positive news regarding Britain’s economic recovery when he delivers the Autumn statement in two days’ time. GDP growth in the third quarter of 2013, at 0.8%, is the fastest it has been in three years and there has been a substantial upward revision for next year, with growth now expected to be 2.4% up from the 1.5% forecast in May.

Importantly, however, the recovery is being driven primarily by household spending (making up approximately two thirds of the rise in the third quarter), a highly unsustainable path considering that wages are falling in real terms and are projected to continue doing so despite the rise in economic activity. This means that households are using savings or are borrowing in order to spend. 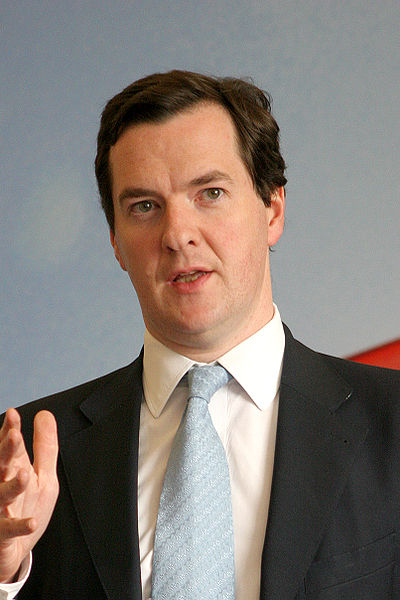 Likely to ignore that the growth figures are riding on the back of consumer spending
(Credit: M. Holland)

Figures released by the ONS last week show that household spending increased by 0.8% quarter on quarter, up 2.4% compared with Q3 2012, and contributing 0.5 percentage points to the overall GDP figure. At the same time, median household income has fallen by a substantial amount since the crisis began. On Monday, the ONS reported that “[b]etween 2007/08 and 2011/12, median income fell from £24,100 to £23,200, a percentage drop of 3.8%”. When looking only at non-retired households, the drop becomes 6.4%. According to an IFS study, the decline in real household income relative to their pre-crisis level will continue until 2015-16, with low income groups faring considerably worse because they will be most affected by cuts to the welfare budget.

The combination of higher household spending and falling real wages means that households are using up their savings and/or borrowing more. The household savings rate is at a five year low and is projected by the OECD to continue falling through 2015. The Resolution Foundation estimates that 55% of low to middle income households in Britain have no savings at all.

Figures recently released by the Bank of England show that household debt in the UK has hit a record high in nominal terms at £1.43 trillion. This translates to a debt to income ratio of 140%, a figure that is far less quoted by Tory politicians than the public debt figure (which at around £1.19 trillion is approximately 75% of GDP). According to a recent survey, 18% of Britons, or 8.8 million people consider themselves to be in serious debt.

A return(?) to the pre-crisis growth model

David Cameron said before the last election that “[w]e need to make a really big change: from an economy built on debt to an economy built on savings”. Unfortunately, this has failed to materialise. The coalition government’s signature policy, the Help to Buy scheme, has unashamedly encouraged a new generation to live a huge chunk of their lives in debt. The Bank of England, soon after Mark Carney announced it was no longer appropriate to have its ‘foot on the accelerator‘ of the housing market and was ending the Funding for Lending Scheme’s support the mortgage market, announced that 67,701 home loans worth £10.5 billion were made in October. (Moreover, by raising the cap on university tuition fees, the coalition has effectively forced more graduates to begin their working lives in debt.)

If there is a housing price correction, or households are unprepared for rising interest rates, as Mark Carney has recently warned about, then we may see the beginning of a new crisis. Some households may find themselves with underwater mortgages, defaults would rise, and bank balance sheets will suffer. The tougher new capital requirements born out of the financial crisis, already watered down as a result of relentless pressure from bank lobbying, may not be enough to weather this new storm.

As income continues to be outpaced by inflation, and with household savings drying up and debt continuing to finance consumer spending, the Chancellor still has a lot to worry about. If he won’t acknowledge the reality of this unsustainable recovery, it’s hard to see how his Autumn statement will affect any real change.

Joel Suss is Managing Editor of the British Politics and Policy blog. He joined the LSE Public Policy Group in January 2012 and is an alumnus of the LSE MPA programme.