While the UK has shown progress in acknowledging the relationship between mental health and unemployment, the extent of implementation of support interventions is lacking, writes Karen Steadman. Considering the high-costs associated with mental disabilities, improving support for those with conditions would have significant economic benefits.

In recent weeks we’ve seen a steady trickle of news anticipating that economic recovery is in sight. Though unemployment rates have been decreasing (faster than predicted), we’re not out of the woods yet. It seems timely to take a look at the UK labour market and consider the areas in which we are failing to realise the potential of our workforce.

Workforce health is one such area. Mental health problems are the largest single source of disability in the UK, accounting for 23 per cent of the total burden of disease, with co-morbid mental and physical health conditions proving a further burden. As far as the labour market is concerned, the often repeated story – that one in six people of working age have a mental health problem – emphasises the need to focus on the relationship between mental health conditions and labour market productivity.

Last week, The Work Foundation hosted the launch of a new report from the OECD looking at this relationship. One of the headlines of Mental Health and Work: UK was that mental health disabilities costs the UK around £70 billion each year – almost 4.5% of GDP. Along with lost productivity through working while ill and the costs to the health system, a major cost associated with mental health is social security payments – providing financial assistance to the unemployed, and to those whose health condition is recognised as partially or completely restricting  their ability to work.

The cost of such programmes is a continuing concern. Up to 370,000 people move onto disability benefits each year, with 4 out 10 new claims attributed to mental health – one of the highest proportions in the OECD. Improvements in detection and a reduction in mental health related stigma are the more positive explanations for these high numbers, but these effects do not deter from the fact that labour market outcomes are poor for people with mental health conditions. 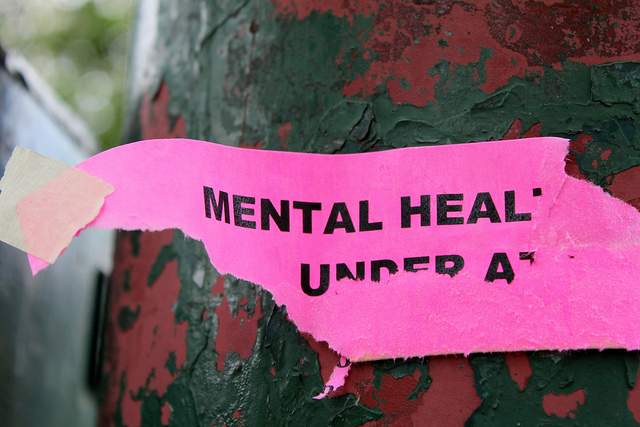 One of the points that struck me most in the OECD report was the suggestion that many people with mental health conditions who have historically been deemed as not fit for work and placed on related disability benefits, should not have been. In the words of Christopher Prinz, Senior Economist at the OECD, they have been “unnecessarily shielded from the labour market”. This reflects a long-term structural problem in the way the benefits system has been used.

Letting someone who has been effectively held back from participating in the labour market know that society does not think they are incapable of working, and that they will be provided with support and encouragement to re-enter the work force sounds positive in principle. Especially when you consider the evidence that many people with even severe mental health conditions can work and would like to work, and that working is even likely to have a positive effect on their health and well-being. In practice though, this is not the way the system has been working – there continues to be a much greater emphasis on coercive measures to work than there is on support to work.

One of the major recent reforms to move people back into the labour market has been the reassessment of all Employment Support Allowance recipients (a move only undertaken by Netherlands among other OECD countries!), against a new Work Capability Assessment criteria. But returning people to the labour market is just one side of the coin. What is still lacking is the provision of sufficient support to help these new job seekers to become employed. These are people who have been told repeatedly (possibly for years) that they cannot work and that they will not be made to work, but who are now being told to go and find a job. Such long-term detachment from the labour market can be highly detrimental for an individual’s motivation to work and their self-confidence in their abilities – something which may worsen with the realisation that even if jobs are available in the first place (gaps in employment and a history of illness not being the most attractive propositions for many employers), they may be of low quality, and may even exacerbate poor mental health. Further account also needs be taken of the fact that being assessed as ‘fit for work’, does not mean you are 100% fit – considerable support will still be needed. This is all before addressing skill gaps and qualifications.

As stated in the OECD report: “recent reforms have emphasised benefit caseload reductions but these have not been matched with corresponding employment and health support for benefit recipients. Further substantive efforts needs to be made to reintegrate people with health problems into the labour market”.

So, what does this mean? The approach needs to be three-pronged. A first prong is job creation and in-work support measures – particularly creating incentives for employers to take on people with mental health conditions (a controversial subject in itself). The second prong is reforms to the benefits system, preventing more people being placed onto inactive benefits who should not be there, potentially harming their ability to re-enter the labour market in the longer term. This appears to be the focus of current government policy – the success of which will be judged in time. In light of the OECD report, I would argue that the third prong is the most urgent to address – providing support to those who are caught in the middle of this conceptual shift towards more active benefits – those who have been reassessed as being fit for work, but are not being appropriately supported to work.

A number of support interventions already exist – the OECD highlighted the UK’s progress in acknowledging the relationship between mental health and unemployment (including recognition of the need for integration of health and employment services), but the extent of implementation of these is less positive. Along with greater recognition in the Job Centre environment of mental health conditions (only a quarter of JSA claimants discuss health with their advisors – with chances are physical health more likely to be disclosed), there needs to be improved access to psychological support through IAPT. Work Programme providers need to be encouraged (and incentivised) to follow the evidence on how to get people into  work – Individual Placement and Support (IPS) is a well-evidenced supported employment  model for getting people  with more severe mental health conditions into employment.

Much of the above is not saying anything new – those of us working in this field have been banging the IAPT and IPS drums for some years. In the current climate however, where the UK needs to mobilise its workforce to take full advantage of the economic recovery – we need to bang it louder than ever.

Karen Steadman joined The Work Foundation in 2012 as a researcher in the Centre for Workforce Effectiveness. Karen has over 10 years experience in the in the fields of health and social policy, research, development and evaluation. She has worked in public, private and third sectors, in both the UK and Australia.