With Brexit and a period of increasing economic uncertainty upon us, this is not the time to replace the Governor of the Bank of England. Indeed, it is Mark Carney himself who should seek certain reassurances from the government before he confirms his Governorship for another five years, writes Costas Milas.

A series of Halloween monetary policy stories emerged over the weekend. Both The Sunday Times and The Financial Times reported that Governor of the Bank of England Mark Carney, is under pressure to leave his job. This speculative but certainly destructive noise about Carney’s possible departure gained momentum after Theresa May warned of “bad side effects” from the Bank of England’s loose monetary policy of near-zero interest rates and (additional) Quantitative Easing measures.

(Putting these comments in context, when the job was advertised in September 2012, the advert was clear: “the Governor will work closely with the Chancellor of the Exchequer and HM Treasury, which is responsible for setting the framework under which the Bank operates.” If we take the PM’s comments at face value, it makes sense to conclude that Mr Carney failed to work closely with the Chancellor. If this is indeed the case, why has Mrs May not blamed directly Mr Osborne or Mr Hammond?)

It is important to recognise that the Bank of England’s Monetary Policy Committee takes policy decisions in a forward-looking two-year horizon. Therefore, one cannot blame the Committee for cutting the policy rate down to 0.25 per cent and authorising additional Quantitative Easing after the referendum – on the reasonable assumption that the government, by honouring rather promptly its promise to the British people, would have completed a large part of Brexit negotiations within the next two years.

Mr Carney has also been blamed by Brexiteers that he sacrificed the Bank of England’s independence when he signed up to ‘Project Fear’. A counter-argument is that when Mr Carney noted in May 2016 that a Brexit vote could trigger a UK recession, he fired his warning shot on the expectation that Brexiteers would have been extremely keen to trigger Article 50 immediately after the vote. This, on the reasonable assumption that it was in our economic interests to stop posting, on a weekly basis, ‘wasteful’ cheques of £350 million to Brussels.

That said, the latest GDP data showed a robust quarter-on-quarter expansion of 0.5 per cent which appears to suggest no immediate Brexit threats to the UK economy. Although it makes sense to argue that the (very) short-run effects of Brexit might have been exaggerated, part of the better-than-predicted economic performance is arguably driven by the very actions of Mark Carney and the Monetary Policy Committee. Indeed, while David Cameron was busy preparing his resignation announcement, it was Mark Carney who took central stage by moving quickly to reassure the public and the financial markets on the very morning after the Referendum result.

Last but not least, let us not forget that this was only the first release of GDP which is subject to revision as it is based on only 44 per cent of the data required for the final estimate. In fact, big revisions to GDP first-release estimates provide a challenge to policy-makers especially if these take place on a regular basis. Thankfully, this is not the case. A simple analysis of UK’s first-release and revised GDP data (see Figure 1) since the recent financial crisis suggests that revised GDP data have, on average, added only 0.06 per cent to the first-release of GDP growth. 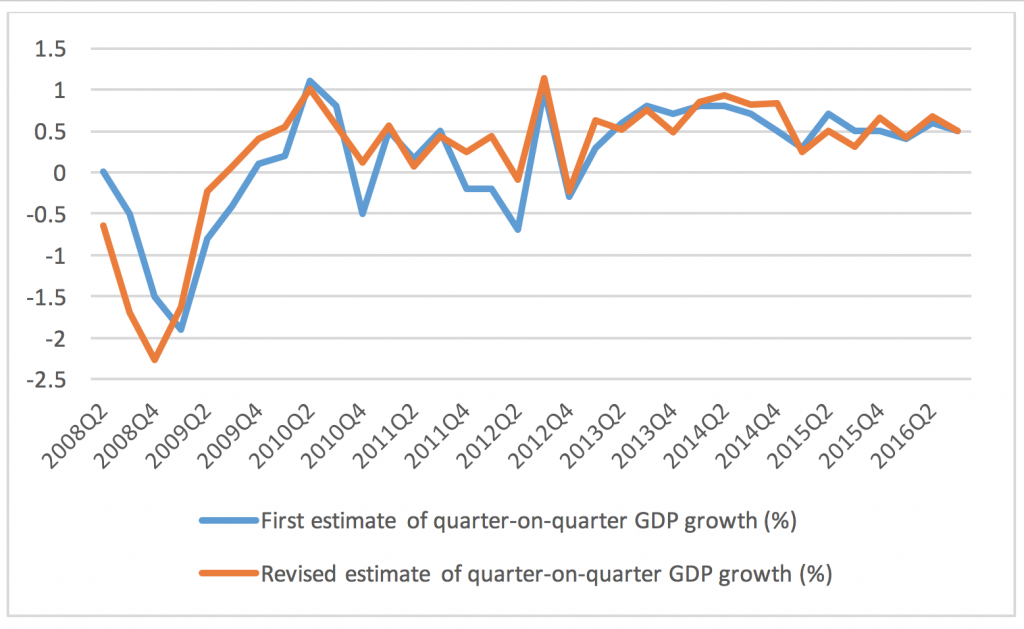 But there is a cause for concern. The trivial (on average) difference between the first release and the revised GDP data is largely driven by the 2010-2016 post-crisis period which arguably featured very little elements of economic uncertainty. Contrast this with the fact that ONS largely over-predicted quarterly GDP growth by as much as 1.2 percentage points(!) during the economic challenging times in 2008 (see Figure 1) and then moved to the other extreme by under-predicting UK growth in 2009.

Taking all the above into consideration, the legitimate worry is that as we are entering (again) a period of increasing economic uncertainty, ONS might repeat the ‘over-prediction bias’ of 2008. This is bound to misguide policy-makers towards delaying action that would have otherwise proved a timely response to the rapidly developing Brexit headwinds.

One of the unwritten rules of football is never substitute a player – let alone your captain – when defending a corner. Indeed, with Brexit headwinds moving fast(?) our way, this is not the time to replace the Governor. Mark Carney himself should seek reassurances of no further ‘foul play’ by the government so that he confirms his Governorship until 2021. Unless, of course, government officials have already found a ‘suitable’ replacement. But then again, would another candidate be willing to risk their reputation on such a demanding job knowing, or at least suspecting, that their predecessor decided to step down partly because of rising tensions and/or interference by government officials? 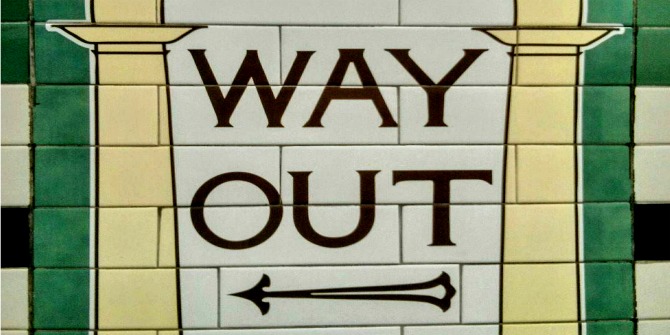 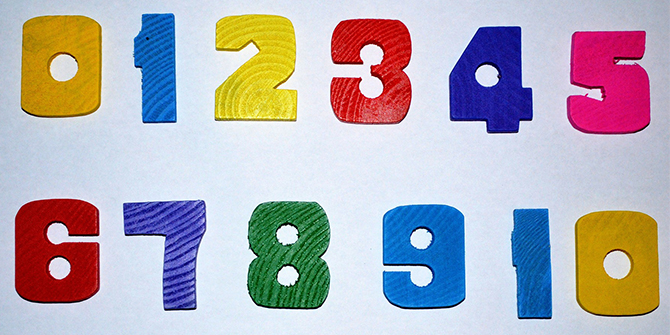 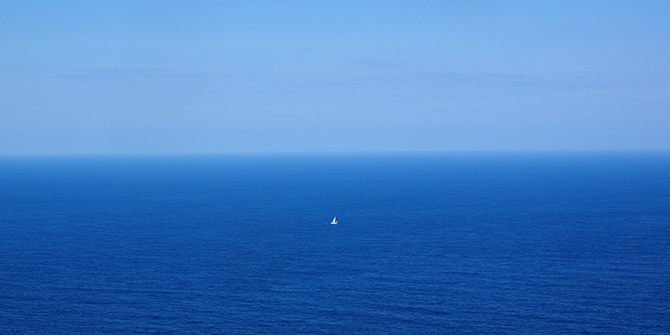