The current controversy over the reduction in the value of working and child tax credits has raised the question as to how we can maintain household incomes at the same time as reducing employment disincentives. Here, Malcolm Torry argues that the concept of a Citizen’s Income continues to gain traction as a serious idea that could transform the benefits system.

A Citizen’s Income (sometimes called a Basic Income) is an unconditional and nonwithdrawable income paid automatically to every individual as a right of citizenship. Twenty-five years ago the Liberal Democrats included the intention to explore the possibility of implementing such a scheme in their list of policies. Around the same time the Labour Party’s Social Justice Commission also discussed the idea. There are signs that we are now seeing another such period of mainstream interest, and one that might be more sustainable.

In 2013 I published Money for Everyone: Arguments for a Citizen’s Income. Just under a year later, the 2014 Green Party’s Spring conference asked for a Citizen’s Income proposal to be included in their manifesto for the 2015 general election. Before the manifesto got published the only information available was that the party wanted to see the amount set at £72 per week for working age adults and also wanted to abolish means-tested benefits.

In January this year this issue was given significant coverage in The Guardian as my own microsimulation study showed that, problematically, such a scheme would impose significant losses on some low income families at the point of implementation.

The reason for the losses was that this version of Citizen’s Income would have more than replaced the value of the income tax personal allowances (which would have been reduced to zero), but it could not at the same time replace the entire value of a household’s tax credits if these were to be abolished.

Further work has demonstrated that £50 per week could be paid to every working age adult (with lower amounts for young adults, children, and elderly people) by raising income tax rates by just 3 per cent. Income tax personal allowances and the national insurance contributions lower earnings limit would need to be reduced to zero, national insurance contributions rates equalised at 12 per cent across the earnings range and the entire existing benefits system left in place (including child benefit and the basic state pension). 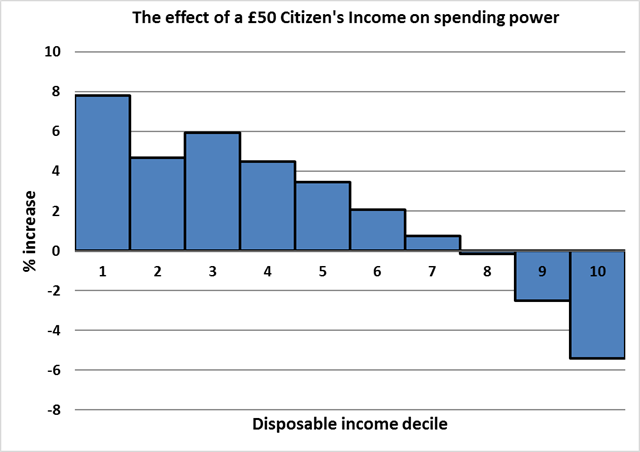 It would be interesting to see how many households still on small amounts of means-tested benefits would then choose to rearrange their household income strategies in order to escape from means-testing: a transition currently impossible for far too many households. A significant advantage of this particular Citizen’s Income scheme is that because very few adjustments would need to be made to our current tax and benefits system the scheme could be successfully implemented almost overnight.

In relation to the current controversy over tax credits, and the way in which they subsidize and therefore depress wages: means-tested benefits function as a dynamic subsidy (they rise as wages fall), whereas unconditional and nonwithdrawable benefits, such as a Citizen’s Income, function as static subsidies (they remain the same, whatever the wage level). Static subsidies have less of a depressing effect on wage levels and so are preferable.

A significant sign of the growing mainstream interest in this policy idea is the range of institutions now exploring it. Ten years ago the New Economics Foundation proposed a Citizen’s Income scheme. Compass has recently published a paper featuring the idea. The Joseph Rowntree Foundation published a paper focusing specifically on it, as well as calling for a wider debate: contributions that signify that the discussion has shifted from the idea’s potential usefulness to whether the idea is now feasible.

Indeed, across the political spectrum think-tanks are now running their own research projects on Citizen’s Income including The Adam Smith Institute, The Royal Society of Arts, and The Fabian Society. All are planning to publish during the next few months.

It is becoming more difficult to escape discussion of Citizen’s Income, or questions about our benefits system that imply reasons for implementing such a scheme. The debate is now widespread and serious and the more social policy academics, practitioners and institutions participate in it, the better that debate will be.

Note: This article gives the views of the author, and not the position of the British Politics and Policy blog, the London School of Economics, or the Citizen’s Income Trust.

Dr. Malcolm Torry is honorary Director of the Citizen’s Income Trust and a Visiting Research Fellow in the Social Policy Department at the London School of Economics.