With a record high number of women elected to Parliament, was the 2017 general election something to celebrate? Sarah Childs, Meryl Kenny, and Jessica Smith re-assess the recent result and consider what it means for women’s political representation.

‘Record-breaking’, ‘unprecedented’, ‘historic’ – these were the headlines after the UK’s 2017 General Election. Some of the articles attached to these celebratory headlines centred on the fact that there were more women MPs elected than ever before. Others highlighted that the ‘200 seat’ mark had been breached. Or championed the diversity of House overall, with rising numbers of BME, LGBT, and disabled MPs.

But be under no illusion, the House of Commons is still unrepresentative. Relative to their presence in the population, the numbers of BME MPs needed to have doubled in 2017. It rose from 41 to 52 (8% of the House). Five disabled MPs have been elected (an increase of three from 2015), but this amounts to less than 1% of the House’s membership – compared to 1 in 5 of the population that self-identify as disabled. 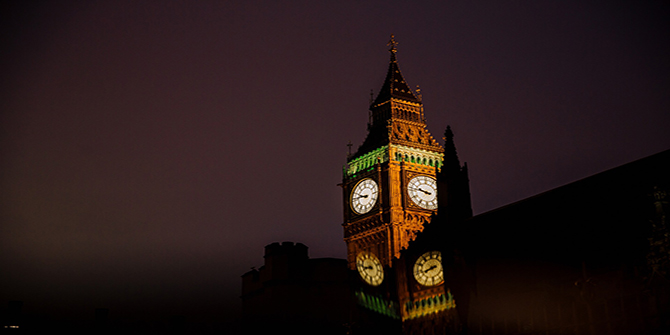 In terms of women’s representation, we saw a small increase of 12 more female MPs. When the final seat was counted – for Emma Dent Coad in Kensington – the total number of women in the House of Commons was 208 (up from 196 immediately before the election). But these women constitute 32% of all MPs – a mere 2% increase. Still less than one third female, the UK would now rank 39th in the Inter-Parliamentary Union’s global league table, lagging behind many of our European comparators.

To portray – as many UK newspapers and websites did – the ‘unprecedented’ number of women MPs as some sort of ’smashing’ of the glass ceiling is simply incorrect – a few more scratches at best. Forget the ‘200 women’ mark, the real threshold to cross is 325.  And that seems as long a way off as ever.

No doubt we’ll be accused of being ‘feminist killjoys’ but there are very real risks in not contesting the plethora of upbeat media accounts. It, wrongly, suggests that: (1) the job is done: the ‘problem’ of women’s representation has been solved; or (2) gender equality is on its way (#justbepatientladies).

If only we could be that optimistic. The outcome of the 2017 GE raises classic issues for women’s representation:

Stagnation and Fallback. A 2% increase is, of course, an increase, but gains on women’s representation have been too slight and are taking too long. Neither has progress been straightforward. In Scotland the proportion of female MPs decreased in this election from 34% to 29%. This is largely due to Conservative gains – only 1 of the 13 Scottish Tory MPs elected is a woman. The SNP’s Tasmina Ahmed-Sheikh was also defeated in Ochil and South Perthshire, leaving Scotland without any BME MPs. Talk of parity in the House of Commons being achieved in 45 years incorrectly assumes that the direction of travel will always be upwards – which is why gender and politics academics rarely engage in forecasting the ‘number of years’ it will take to achieve equality projections.

Party Asymmetry. The overall percentage of women MPs also masks significant differences amongst the parties. There was some speculation in the run-up to the election that the Conservatives would see a ‘breakthrough moment’ on women’s representation in 2017, potentially catching up to Labour for the first time. This didn’t materialise – in fact, the gap widened slightly. Women now constitute 45% of all Labour MPs (119 of 262), up from 44% before the election. Meanwhile, the Conservatives saw a decrease in the number of female MPs, dropping from 70 to 67, with the percentage of women’s representation in the party unchanged at 21% (in the context of an overall loss of seats). The Liberal Democrats, which were a men-only party in 2015, now have four women MPs (33%, albeit still on low numbers overall), including the return of Jo Swinson in East Dunbartonshire. Meanwhile, women are 12 of the reduced SNP group at Westminster (34%), a loss of six women from the previous Parliament. Only 1 of the 10 DUP MPs – now potential ‘queen-makers’ – is a woman.

Quotas worked, yet again. As in all elections from 2005, Labour successfully employed gender quotas in the form of all-women shortlists (AWS). This quota is the reason why it has been the ‘best’ party for women’s descriptive representation at Westminster. It is a shame that Labour’s quotas haven’t been more contagious – without commitments from all of the parties, progress will continue to be glacial.

Classifying the 2017 GE as ‘record-breaking’ for women is lazy journalism that belies the reality, and breeds complacency. It gives some parties a congratulatory pat-on-the-back for minimal progress, if not decline. Moreover, it side-steps the question of interventions: will the government now commence section 106 of the Equality Act 2010 – so that parties publish their candidate diversity data? Will the Government respond to recommendations advocating legal quotas, which, all the global evidence shows, are the most effective way to ensure significant increases in women’s representation? (Check out The Speaker’s Conference report 2010, The Good Parliament Report 2016, and the WEC report 2017).

The next election might be a few months away or it might be in five years time – but it is clear that the issue of equal representation is too important to leave up to the discretion of political parties. Warm words are not enough – with over 100 women MPs still missing from Parliament, it is time for legislative quotas to embed equality in our political institutions. Without them, the search party will not be called off anytime soon.

Note: this was originally published on the PSA Women & Politics Specialist Group’s blog.

Sarah Childs is Professor of Politics and Gender at the University of Bristol. She tweets @profsarahchilds.

Meryl Kenny is Lecturer in Gender and Politics at the University of Edinburgh. She tweets @merylkenny.

Jessica Smith is a PhD student at Birkbeck, University of London. She tweets @Jess_Smith1534.

Calls for more legislation to equalize women’s and men’s pay are flawed. Policies already in place have successfully narrowed the pay gap