James Laurence discusses how organised social participation in a group or club can impact young people’s interethnic attitudes. He finds that such participation does lead to positive changes, evident months after the event. He argues that these findings provide encouraging evidence that sites of youth engagement, especially national engagement schemes, can foster intergroup cohesion.

As each new story of terrorism breaks, it feels ever more important to ask: how can we make sure our future remains a cohesive one? For most young people today, ethnic diversity is increasingly the norm. How then can we stop today’s tensions being reproduced in tomorrow’s generation? One way might be through youth social engagement – that is, structured, organised involvement in civic and social clubs and groups.

This much we know: positive mixing between ethnic groups builds stronger relations, especially mixing that gets people working together towards common goals. However, fostering this kind of mixing in society can be difficult. Residential segregation is a big obstacle to mixing, while at the same time preserving fear and suspicion between groups. Even when there are opportunities, mixing doesn’t always happen, as seen when groups re-segregate in diverse schools. In fact, even when mixing does happen, it’s not always the positive kind that helps, and when experiences end up negative they can worsen people’s attitudes. This can be especially true for people without much prior interaction with other groups – any mixing they do have can create more rather than less anxiety.

In the face of these obstacles, could youth engagement help strengthen interethnic relations by fostering more positive social mixing? Can it do this without also generating negative social experiences? Could engagement be particularly beneficial for those who’ve had less experience of mixing with other groups? And, in particular, can it overcome barriers to better relations in society, such as residential segregation?

Testing the impact of youth engagement

To explore these questions, I looked at how taking part in a national youth engagement scheme – the National Citizen Service (NCS) – impacted young people’s mixing with, and attitudes towards, other ethnic groups. During NCS, young people aged 16-17 take-part in a series of residentials and activities, involving team-building, learning life skills, and civic engagement, over a period of three to four weeks. Through these experiences, they also get opportunities to mix with others from different backgrounds and communities.

To explore the impact of engaging, approximately 3,500 participants were surveyed just before taking part and then approximately three months after completion (the evaluation-period). A sample of young people who expressed an interest in taking part in the research (e.g., attending a recruitment event) but did not participate in NCS that year were given identical surveys over the same period, forming a ‘control group’. By removing any changes in cohesion reported by the control group over the evaluation period from changes experienced by participants, we get a relatively good estimate of how taking part impacted young people – known as a difference-in-difference (DiD) score. For example, if participants saw a +10 point change in their outcome, and the control group saw a +4 point change over the same period, then the impact of participating (the DiD-score) would be +6 points.

So, what did we find? Figure 1 shows the DiD-scores in how warm participants feel towards other ethnic groups – this is measured using the well-known ‘feeling-thermometer’ question, where individuals report their warmth towards other ethnic/racial groups on a scale of 0-100 degrees. As the ‘Overall Impact’ in Figure 1 shows, taking part boosted young people’s warmth by an average of three degrees. On one hand, this seems quite small. But this impact substantially depended on how much mixing a young person had before taking part. 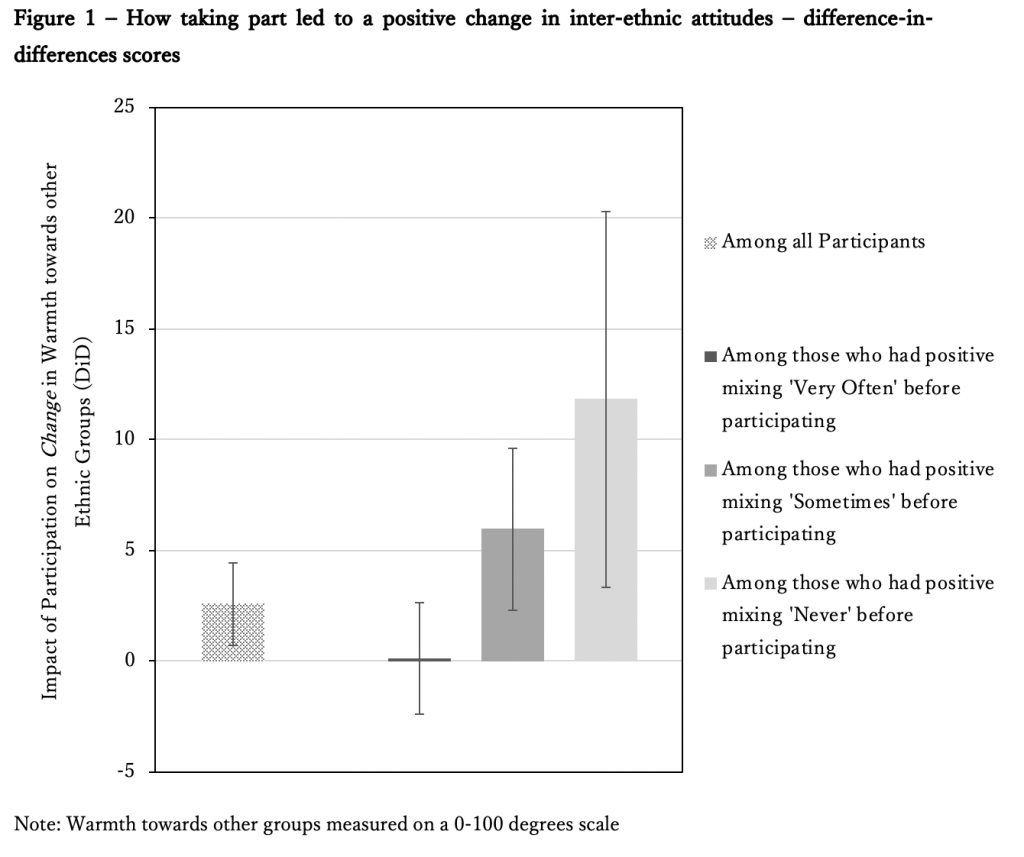 How did participation manage to foster these improvements? Primarily through boosting positive mixing. The ‘Overall Impact’ in Figure 2 shows us that participating increased positive mixing between ethnic groups – measured by asking young people how often they had ‘positive or good experiences’ with others from different ethnic/racial groups. However, again, this improvement depended on how much mixing a young person had before taking part. The biggest increases in positive mixing were found among those who joined reporting far less mixing to begin with. This, in turn, explains a large part of why this ‘low pre-participation mixing’ group also saw the biggest improvements in their warmth – because they also saw the biggest increases in positive mixing. 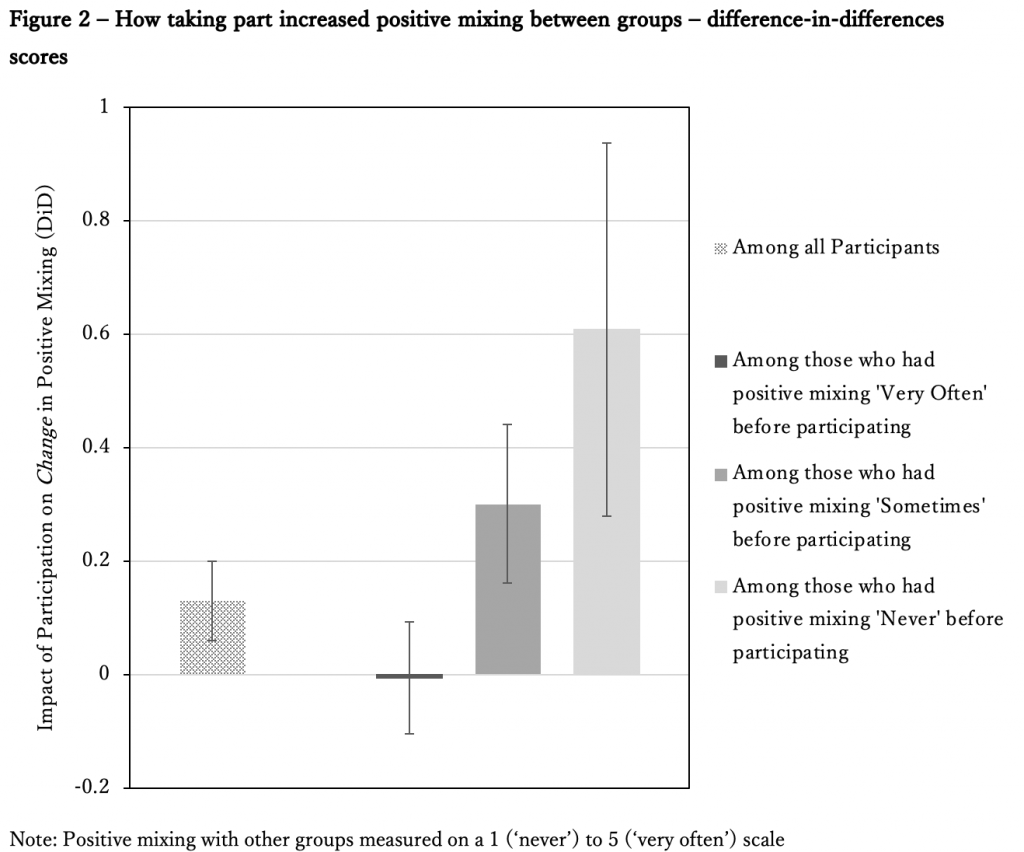 Taken together, despite concerns that young people without much prior experience of mixing may not have benefited, it turns out they did, and benefited the most. At the same time, although participating provided opportunities for both positive and negative mixing experiences, only positive experiences increased.

On friendships and ‘associational bridges’

So, youth engagement improves attitudes, especially among those with little prior experience of mixing, and does this primarily via boosting young people’s mixing. However, if youth engagement can’t overcome obstacles to mixing in society in the first place, such as residential segregation, its ability to help is going to be limited. Also, while mixing during engagement is clearly effective, what happens when engaging ends? Will young people’s mixing decline again, or could taking part help create more lasting social bonds across groups that stick?

To answer these questions, I also looked at whether taking part increased young people’s cross-group supportive social bonds – that is, how many people from another ethnic group young people ‘feel happy getting in touch with to ask for advice or a favour’. Figure 3 shows the number of cross-group ties, reported by participants and controls, before and after taking part. Clearly, those who participated reported more cross-group friendships after taking part. And importantly, these ties were still evident at least three months after engagement ended. However, what is crucial is that these improvements differed significantly depending on how segregated the areas were that young people came from. 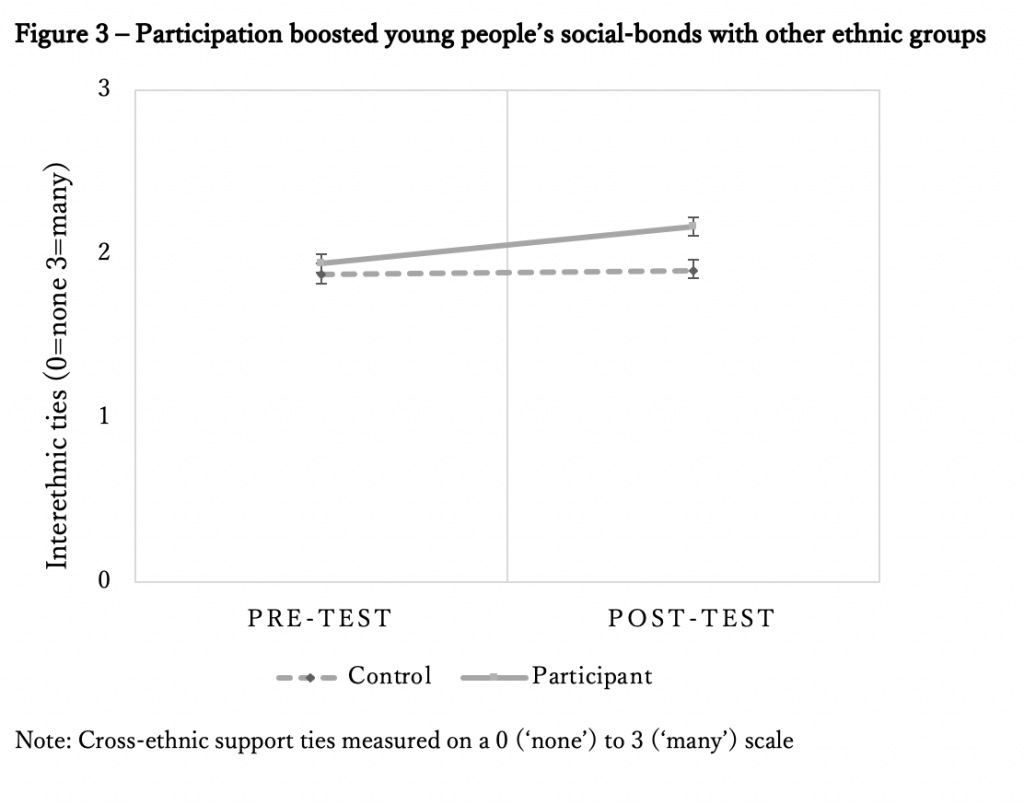 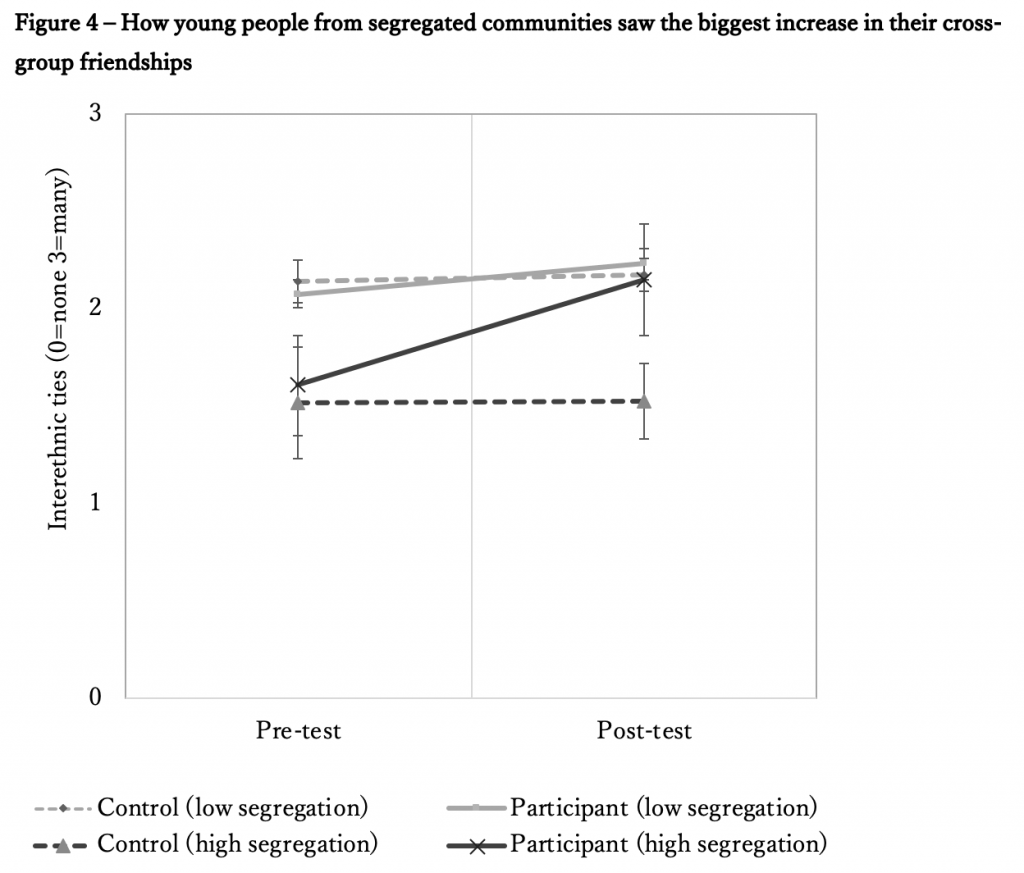 Youth engagement therefore not only builds the kinds of cross-ethnic ties that stick but is especially good at creating bonds among those from segregated areas. Residential segregation is notoriously difficult to reduce and a key barrier to positive relations in society. Youth engagement, however, is able to build ‘associational bridges’ across such divides to grow ties where they are needed most.

It seems hard to believe that a discrete period of youth engagement could elicit such positive responses. Could such a small thing really help cohesion like this? Yet, youth engagement activities, like NCS, are unique experiences. Where else produces a space, away from school peer pressures, home constraints, and the closure of neighbourhoods, where strangers from different backgrounds come together; whose basis for commonality are questions of how to cross that river, who’s cooking the next shared meal, or what can we do to help our communities. Spaces like this, removed from the everyday, are rare. And despite only being a small thing, perhaps their uniqueness allows relationships to flourish which would normally remain out of reach, and attitudes to rapidly change that would normally remain stuck.

James Laurence is an ESRC Future Research Leaders Fellow at the Cathie Marsh Institute for Social Research and the Department of Sociology, University of Manchester.

All articles posted on this blog give the views of the author(s), and not the position of LSE British Politics and Policy, nor of the London School of Economics and Political Science. Featured image credit: by Devin Avery on Unsplash.

The history of riots in London shows that persistent inequality and injustice is always likely to breed periodic violent uprisings.