When Daniel Levy and Natan Sznaider first published The Holocaust and Memory in the Global Age in 2001, there was a perception that commemorating and learning about the Holocaust was becoming central to the establishment of internationalist and cosmopolitan values. Writing just a couple of years later, the historian Dan Diner also remarked that ‘Europe, on the fast track to integration, seems more and more to be finding a common unifying memory in the events of World War II, and – what is increasingly emerging a posteriori as its core event – the Holocaust’. Seen from Britain in 2020, the situation seems rather different. State-led public Holocaust memory is now more often associated with the promotion of national ‘British values’, and I argue here that this has noteworthy (and occasionally unsettling) side-effects for how memory intersects with Christian, Muslim, and Jewish communities.

When the first New Labour government enthusiastically embraced plans for a new national Holocaust Memorial Day, they did so against the backdrop of the foundation of the International Holocaust Remembrance Alliance (1998) and the Declaration of the Stockholm International Forum on the Holocaust (2000). And when Andrew Dismore proposed the day’s establishment to the House of Commons in June 2000, he cited the recent NATO intervention in Kosovo and the opportunity for coordinated remembrance across the European Union.

But as Holocaust education and commemoration have become an increasingly prominent element of public life, there has been a shift in emphasis. The report produced by the Prime Minister’s Holocaust Commission in 2015 may have referred vaguely to ‘lessons that will resonate with people of all faiths, from all lands, for all times’, but its 68 pages made no reference to the EU. Instead, it declared that ‘[i]n commemorating the Holocaust, Britain remembers the way it proudly stood up to Hitler’ and that ‘[i]t is Britain’s unique response to the Holocaust and its unique role in the war that gives us the right to claim a particular attachment to the values of democracy, equality, freedom, fairness and tolerance’. As Euroscepticism moved to the centre of British political discourse, Holocaust memory became less a force for European integration and more a source for national self-validation. In keeping with this, when in 2016 it was announced that a new memorial and learning centre would be built in central London the government press release was headed with David Cameron’s vision that it would ‘stand beside Parliament as a permanent statement of our British values’.

It is a shift that prompts reconsideration of the ways in which public memory of the Holocaust intersects with different cultural-religious communities.

In recent decades, British churches have been at times open to significant self-reflection regarding centuries of anti-Jewish tradition and the decidedly uneven behaviour of Christians during the Nazi period. Yet the 2010s also saw a less critical interplay between Holocaust memory, Christian heritage, and ‘British values’. It is notable that several Conservative politicians closely involved in Holocaust remembrance have been particularly forthright defenders of Britain’s status as a Christian nation. Eric Pickles, currently the United Kingdom Special Envoy for Post-Holocaust Issues, was a vigorous advocate for retaining Christian prayers at local council meetings and combatively took on secularists in a Telegraph article entitled ‘A Christian Ethos Strengthens Our Nation’. Michael Gove, who as Education Secretary fixed the Holocaust as the one irremovable topic for teaching modern history to 11-14 year-olds, took to The Spectator to defend the moral virtuousness of Christianity as ‘the foundation of our civilisation’. And Cameron, who launched a government commission on Holocaust remembrance and championed the construction of a major new memorial, declared that ‘British values’ are ‘Christian values’, and that ‘we should be more confident about our status as a Christian country’.

These overlaps are worth highlighting because government-supported Holocaust commemoration and education has been conspicuously light on confronting Christian anti-Jewish attitudes and behaviours. Reflecting this, every year MPs in the House of Commons hold a special debate on the meaning of Holocaust Memorial Day but amidst their lengthy speeches Christian guilt is a topic that goes unmentioned. A striking example occurred in 2015, when the Conservative MP Edward Leigh mused on the 750th anniversary of Edward I’s first parliament, our national values of hospitality, and the history of Jewish integration into British society, but forgot to mention the edict that, just a few years after 1275, expelled Jews from England until the mid-17th century.

The integration of Holocaust memory into language of ‘British values’ has also had side-effects in relation to Muslim communities given the term’s association with counter-terrorism. During the 2000s, the Muslim Council of Britain’s ill-judged boycott of Holocaust Memorial Day created perceptions of a difficult relationship between Holocaust memory and some Muslim organisations (something that recurs to this day), yet the overlaps of ‘British values’, the Prevent Strategy, and school-level Holocaust education produce their own additional complications. Numerous schools cite Holocaust education and commemoration as evidence of adherence to statutory requirements on counter-extremism and upholding ‘British values’, with the potential awkwardness of such linkages highlighted by the example of Park View school in Birmingham. Speaking in 2018, Theresa May praised its Holocaust educational initiatives as a key part of the school’s rehabilitation following ‘the Trojan Horse scandal which left children vulnerable to extremist ideologies’, but her outlook takes on an uneasy complexion when we bear in mind the controversies of the ‘Trojan Horse’ affair. Given the considerable uncertainties over what actually happened at Park View and widespread disquiet over counter-terrorism policy launched in its aftermath, it appears questionable whether memory of Nazi-era persecution and mass-murder of Jews should become entangled in this issue.

The position of Jewish communities vis-à-vis ‘British values’ appears wholly different to the situation of Muslims. In 2015, a few months after a thousand British imams were told by Eric Pickles to ‘lay out more clearly’ the need to be ‘proud of your faith and proud of your country’, Cameron gave a speech in which he held up Anglo-Jewry as far more exemplary in this regard. ‘[T]here is no community in our country’, he reflected, ‘more proudly part of Britain than our Jewish community [… They are] proud to be Jewish and proud to be British too’. While some, including Chief Rabbi Ephraim Mirvis, have happily echoed such sentiments, there is a risk of papering over the realities of Jewish history in Britain. Not only were Jews expelled for several centuries, but Britain’s uneven and troubling attitude toward Jewish refugees during the Nazi period should be understood in terms of lingering antisemitism. To tackle antisemitism in the 21st century requires confrontation with not only the events of the Holocaust, but also Britain’s own difficult past in this respect.

When Cameron launched his Prime Minister’s Holocaust Commission in 2014, he spoke of ‘the sacred task’ of facilitating enduring remembrance for a ‘young British Christian child or a young British Muslim child or a young British Jewish child’. Such universalising rhetoric has an appealing ring to it, suggesting that confrontation with the Holocaust’s legacies uncomplicatedly transcends cultural-religious diversity. But as Holocaust memory has shifted from its internationalist emphasis to one bound up with promotion of ‘British values’, the task is also to understand the messier contextual variations of how this past is understood and utilised across Britain’s religious-secular landscape.

Dr David Tollerton is author of Holocaust Memory and Britain’s Religious-Secular Landscape: Politics, Sacrality, and Diversity (Routledge 2020). He is Senior Lecturer in Jewish Studies and Contemporary Religion at the University of Exeter. 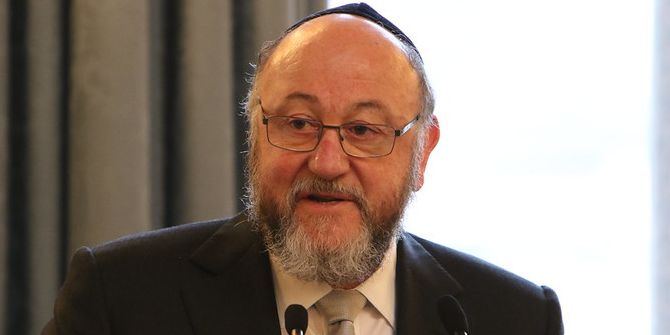