The exploding global consumption of meat is implicated in momentous but greatly underappreciated problems, and industrial livestock production is the driving force behind soaring demand. In The Ecological Hoofprint, Tony Weis seeks to explain why the growth and industrialization of livestock production is a central part of the accelerating biophysical contradictions of industrial capitalist agriculture. Petterson Molina Vale finds that the book shows with clarity that it is time the role of livestock is reconsidered in society.

Let’s face it: most of us have recently considered diminishing our meat consumption on environmental and ethical grounds. With the livestock sector pointed out as responsible for one seventh of greenhouse-gas emission, poor animal welfare standards, and increasingly unhealthy human diets, the act of consuming animal products is in the verge of becoming a genuinely political decision. One that Tony Weis, the author of The Ecological Hoofprint and an Associate Professor of Geography at Western University (Canada), believes must become the centrepiece of any global food policy that intends to shorten the gap between the current reality and a more sustainable food production and distribution system.

The Global Food Economy in 2007. After consolidating an analytical framework grounded on political ecology and spanning areas as varied as history, land use science and agricultural economics, Weis now directs his attention to what he sees as the pivotal cause of a triple increase in the ecological burden, violence and inequalities attached to the food chain: the meatification of diets (see the dedicated website here). Central to his argument is the idea that industrial livestock systems, while successful in delivering low prices, high-yields and labour-saving, leave an ecological footprint that is not sustainable.

Is the author’s theory backed by robust evidence and a solid reasoning? The answer is not a confident yes, but I will argue that the book is still a useful read for anyone dealing with issues of food security and the environment. The relevance of the discussion raised in The Ecological Hoofprint is encapsulated in a recent debate in the journal Nature Climate Change. Scholars trying to estimate the contribution of livestock to greenhouse-gas emissions discuss whether it is in the range of 10%-18% or rather at the astonishing level of 51%. Even if the more recent FAO assessment has the correct figure – 14.5% – it would mean that meat, eggs and dairy products account for nearly as much emissions as the whole of Europe.

The book is an easy, short read, and shall be of equal interest to academics and concerned citizens. The first chapter is for the non-initiated as it does a thorough review of general environmental debates and theories. Chapter 2 makes an erudite historical digression on the role that meat and cattle have played in human societies from Antiquity to the modern world, and proposes a connection between today’s vertically integrated livestock structures and the generation of massive surpluses in crop production: “Vast monoculture fields of maize, wheat, soybeans, barley, sorghum, oats, and rapeseed / canola dotted by spaces of concentrated pigs, poultry, and cattle – must be seen to be organized by a unitary logic” (p.95). The idea is that feedlot-based livestock systems came to fill a gap that was causing enormous problems to farmers as prices would get depressed by excessive supply. With the extra demand of intensive poultry, pork and cattle production systems mechanized agriculture was able to keep modernizing and generating labour surpluses for other sectors. 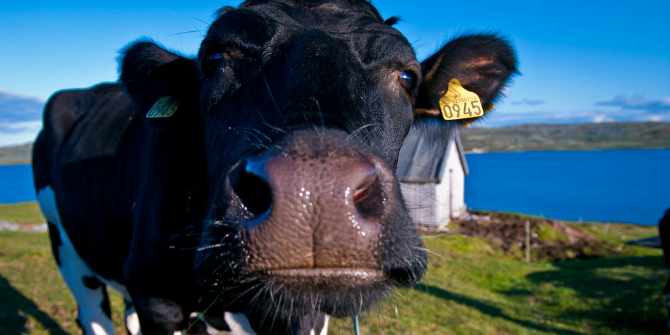 Chapter 3 puts forth the key argument that industrial agriculture generates a hidden ecological footprint in the form of soil exhaustion, increased pest incidence, reduced biodiversity, fossil fuel consumption, depletion of sources of Nitrogen, Phosphorus and Potassium, and contamination by animal waste. Yet while it is unquestionable that animal husbandry poses an important toll on the environment, much remains unanswered in the book. For example, a very important part of livestock is raised in poor countries by poor peasants – in fact, the sector accounts for 30%-40% of GDP of many sub-Saharan African and South Asian countries – and their livelihoods would be severely affected if livestock production were to be seriously challenged.

A vast body of literature that studies technological solutions to reduce the carbon footprint of livestock systems was also disregarded. Gerber et. al. (2013) show that small improvements in livestock management could lead to important emission reductions, and a big part of the necessary changes would be achieved by intensifying livestock production in the developing world. While the author’s pre-analytical stance is that “science and technology cannot resolve the biophysical contradictions of a system where incessant growth and accumulation are the fundamental motive force” (p. 146), a strong case can be made that what is needed is precisely more of the modernization remedy.

The best-argued part of the book is the discussion of animal welfare in chapter 3. Weis extensively documents the way in which feedlot-based livestock systems can be degenerative to animals in aspects ranging from physical degeneration (due to selective breeding for commercially profitable traits) to stress and lack of adequate space, airing and daylight. While failing to mention recent trends in animal welfare such as the UK’s Farm Animal Welfare Committee, the author makes a compelling case for the need of better ethical standards in industrial livestock systems.

To summarize, the book shows with clarity that it is time the role of livestock is reconsidered in society. Issues of animal welfare and the environmental burden of livestock-raising activities must be balanced against benefits of food security and sustaining livelihoods of millions of poor, especially in Africa. Intensification of cattle ranching (by far the most land-hungry of all livestock segments) is the word of the day, yet is far from being a panacea. Tony Weis’ analysis of the inequalities and ecological footprint that are inherent to the livestock food chain ultimately shows that in a crowded world there is no escape to trade-offs: feeding more people while using less land implies more intensive systems; these in turn may have numerous undesirable outcomes, and if vertical integration is to be prevented then greenhouse-gas emissions will rise faster. As economists will say, meat or not meat, lunches are never free.