While many expected Mitt Romney’s nomination on the Republican ticket in the 2012 presidential election to lead to a wider acceptance of Mormons in American politics, it seems to have done the opposite, writes David Smith. He argues that the perception that Mormons have an authoritarian religious agenda and that they are not ‘true Christians’ has led to a large decline in support for Mormon candidates, since 2007, especially among liberals.

In 2012 Mitt Romney became the first Mormon to win a major party’s nomination for the presidency. Despite this achievement, Romney’s candidacy exposed the fact that Mormons are not fully accepted by either side of American politics. They are in a uniquely awkward position, seen by liberals as theocrats and by conservatives as heretics.

In June 2011, Gallup released the results of a survey showing that 22% of Americans would not vote for their party’s Presidential candidate if that candidate were a Mormon, compared to 17% in 1967. Mormons are the only group for whom reluctance to vote has actually increased over the last fifty years. According to the Gallup report, “the last time as many as 22% of Americans said they would not vote for any of these groups was 1959 for Catholics, 1961 for Jews, 1971 for blacks, and 1975 for women. . . . Opposition to voting for each of these has since tapered off to single digits.”

Why are so many Americans averse to voting for Mormons, the group Leo Tolstoy once called “the American religion”? And why are so many prepared to admit their prejudices to survey researchers, when prejudices against other groups are so taboo? Many observers believed Mitt Romney’s 2012 presidential candidacy would make anti-Mormonism a thing of the past, but survey data collected during the Republican primaries shows otherwise. Romney’s candidacy, if anything, has created new sources of anti-Mormonism.

Traditionally, white evangelical Protestants were the group most hostile to Mormons. Many evangelicals do not see Mormons as true Christians, but as a dangerous cult that leads Christians away from salvation. However, since the 1980s Mormons and evangelicals have usually been on the same side of politics. The so-called “culture war” has brought about a dramatic religious realignment in American politics. Issues like abortion and gay marriage have united religious conservatives of all confessions behind the Republican Party, while religious liberals and secular-minded voters coalesce around the Democrats. Mormons and evangelicals are the two religious groups with the highest levels of Republican Party identification.

Mitt Romney’s two campaigns for the presidency in 2008 and 2012 have raised the public profile of Mormonism. And now, while Romney and other Mormon politicians must still overcome conservative evangelical distrust, they face increasing hostility from the liberal side of politics. Romney’s candidacy and his church’s high-profile role in California’s anti-gay marriage initiative have firmly entrenched a perception among liberals that Mormons, like evangelicals, have an authoritarian religious agenda.

To explore this “Mormon dilemma,” I proposed several questions for the American National Election Study’s EGSS 4 module. This is a survey of a nationally representative sample of around 1200 Americans fielded in late February 2012, at the height of the Republican primaries. My questions about attitudes towards Mormons were closely modeled on questions asked by a national Pew survey in 2007, allowing for direct comparison between the two. The graph below shows how many respondents in each sample said they would be “less likely” to vote for a Mormon candidate. 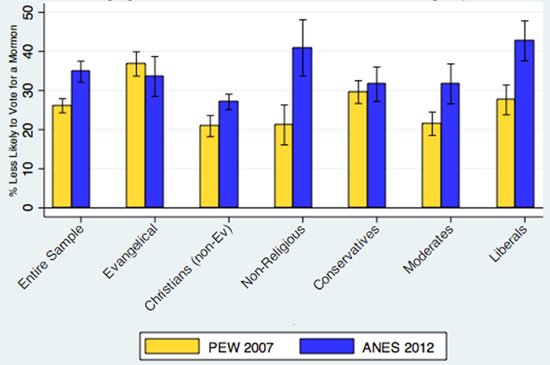 So, did any of this matter to Mitt Romney? The data suggests it did. When respondents’ feelings about Mormons and their feelings about Mitt Romney are measured together on a 100-point “feeling thermometer,” they correlate at .35, controlling for other factors such as party identification and religious affiliation. These results cannot establish causation; it may be that voters who liked Mitt Romney became more favourable to Mormons, rather than the other way around. But at the very least, they show that feelings about Romney and feelings about his religion were strongly associated.

As Mormons become more entrenched in the conservative coalition, they may over time gain more acceptance from evangelicals and other religious conservatives. Many evangelical leaders certainly tried to make their peace with Mormonism during the 2012 presidential campaign. But for now, Mormons remain outsiders on both sides of America’s culture war.

This article is based on the paper ‘The Mormon Dilemma: How Old and New Religious Divides Hurt Mormon Candidates in the United States‘, in Electoral Studies.

April 17th, 2014|David Smith, Democracy and culture, Elections and party politics across the US|0 Comments
Previous post Next post