Physician incentives introduced by the new Accountable Care Organizations could reduce costs of care by 5 percent.

Physician incentives introduced by the new Accountable Care Organizations could reduce costs of care by 5 percent.

The U.S. spends more on healthcare as a percentage of GDP and on a per capita basis, than any other country in the world, something that aspects of 2010’s Affordable Care Act aim to alleviate. Kate Ho and Ariel Pakes take a close look at the likely effects of Accountable Care Organizations: groups of providers whose payment arrangements give physicians incentives to control costs. They find that through capitation (flat, fixed payments) and the sharing of savings, these new organizations could reduce healthcare costs by between 4.5 and 5 percent without corresponding quality reductions.

For over thirty years researchers have documented significant variation in U.S. medical care spending that does not seem to be related to outcomes, both between geographic regions and across hospitals within regions,. Much of the spending variation in the commercial insurance market is due to differences in prices across providers. Given the current policy focus on reducing medical care costs these findings raise the question: what can be done to reduce providers’ high prices and medical spending more generally?

The introduction of physician payment reforms under the Patient Protection and Affordable Care Act of 2010 offers a potential answer to this question. The reforms established Accountable Care Organizations (ACOs) with the initial goal of helping control the costs of the Medicare program. ACOs are groups of providers whose payment arrangements are designed to give physicians a new incentive to control costs. The previous system of fee-for-service payments for Medicare services continues but in addition the ACO can share in cost savings relative to a benchmark if those savings exceed a minimum pre-agreed level. The fraction of savings kept by the ACO is linked to performance on quality. Private ACOs which have more flexibility in designing payment arrangements are emerging in parallel to this Medicare initiative, but many are very similar to Medicare ACOs. Our recent research predicts the likely effect of the incentives put in place by private ACOs on physician behavior and indicates that the average price paid for hospital care could fall by between 4.5 and 5.5 percent, with no corresponding reduction in quality.

Very little data on ACOs themselves has emerged to date; however, similar cost-control incentives are already applied to different extents by different health insurers for their private enrollees in California. These insurers often pay large physician groups through capitation contracts under which the groups have an incentive to control hospital costs, either because they receive a flat, fixed payment to cover the medical costs of their patients (including hospital costs), or more often because they share in any savings made relative to some pre-agreed benchmark for hospital costs. We focus on hospital referral choices, asking whether physicians in groups facing these ACO-type incentives refer their patients to lower-priced hospitals than other insurers.

Our analysis uses a comprehensive dataset from the California Office of Statewide Planning and Development (OSHPD) that provides information on all discharges from hospitals in the state in 2003. We focus on birth and delivery-related discharges for patients in commercial insurers. We estimate a hospital referral equation for each insurer that summarizes the trade-offs made between the price paid by the insurer, quality and patient convenience. The referral equation summarizes the outcome of a decision making process involving the woman giving birth and her physician, neither of whom pay the insurer price. As a result the prior literature on hospital choice has largely ignored the impact of that price on choices. However when the physician group shares in the savings from lower-than-expected hospital costs, the group can incentivize its physicians to direct their patients to lower-priced hospitals.

The data indicated that we needed to allow preferences for different hospitals (or their “quality”) to vary with the severity of the women’s entering diagnoses. Once we did so our results, shown in Figure 1, indicated that the price coefficients were clearly negative and distinctly more negative the higher the rate at which the insurer used capitation (flat fee) payments to physicians. That is, patients enrolled in insurers using largely capitated physician payments were referred to lower-price hospitals, all else equal, than other same-severity patients. 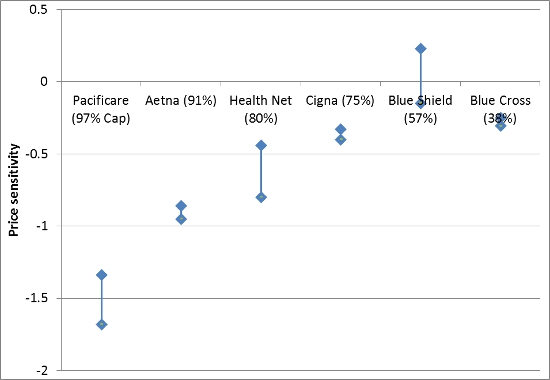 Different choice functions were estimated for the different insurers. When we compared them we found that our estimates of the severity-specific hospital quality rankings were almost perfectly correlated across insurers. This allowed us to compare the “trade-offs” between price, a common quality ranking, and distance implicit in the different insurers’ hospital referral equations. Our findings indicated that though price sensitivity varied directly with the capitation rate of the insurers, the trade-off between price and quality differed very little. Instead high-capitation, price sensitive insurers sent patients longer distances to access lower-priced hospitals than other insurers did with no reduction in quality. This result was consistent with tests we ran on the four outcome measures we were able to access: mother and infant one-year readmission rates, and counts of when they were not discharged to their homes.  Once we conditioned on severity, none of these outcomes differed significantly across insurers.

We used our estimates to investigate the likely short-run implications of rolling out capitation incentives more broadly. We simulated patients’ hospital referrals under the scenario where a low-capitation insurer from our data (Blue Cross) increased the proportion of capitation payments to physicians to the level of a high-capitation insurer, assuming that this changed the referral equation to that of the high-capitation insurer. We predicted the changes in average price paid and distance traveled under this scenario.

The average distance traveled to hospital for Blue Cross patients increased by between 2.5 and 6 miles (from a baseline predicted average of 4 miles) under the counterfactual arrangement. The average price paid fell by between 4.5 percent and 5.5 percent. There was no corresponding reduction in quality. Thus the move to more widespread capitation generated a substantial cost reduction for the average patient, at the cost of some reduced convenience but no reduction in quality.

There are caveats to our analysis. We consider only birth episodes; referral choices may be more or less responsive to financial incentives for other diagnoses, particularly those where physicians have more discretion over treatment choice. We are also calculating only a “short-run” response. Over the longer run we would expect capitation incentives to affect the networks chosen and the premiums, and, as a result, the characteristics of each insurer’s enrollees. It is clearly the case, however, that the first order effect of shared savings arrangements like those being introduced for Accountable Care Organizations (ACOs) under the Affordable Care Act are likely to generate cost savings and an accompanying decrease in convenience without a corresponding reduction in quality of care.

Our analysis also has implications for the structure of ACOs. Our counterfactuals assume that physicians (with the input of patients) are free to choose hospitals within the existing networks observed in the data. This may not be the case for all ACOs. Of approximately 430 ACOs formed by January 2013, just less than 50 percent were integrated with a hospital system, with most of the remainder being sponsored by physician groups. If an ACO includes member hospitals, physicians in the organization may be incentivized to refer patients to hospitals within the ACO rather than to non-member hospitals. This would limit the cost savings generated through the mechanism we study, offsetting the beneficial effects of hospital-physician integration.

This article is based on the paper ‘Physician Payment Reform and Hospital Referrals’, in theAmerican Economic Review.