Homeowners forget about past floods when assessing flood risk and are then repeatedly caught unprepared by the next flood.

Homeowners forget about past floods when assessing flood risk and are then repeatedly caught unprepared by the next flood.

How do homeowners learn about environmental risks such as flooding?  Social scientists have long observed the phenomenon that individuals appear to be surprised and unprepared for uncertain, but predictable natural disasters.  New research by Justin Gallagher finds that homeowners use the incidence of a new flood to update their belief about the risks of a future flood, but do so in a way that doesn’t include all of the available past flood information.  As a result, homeowners tend to forget (or “unlearn”) lessons from the past and are repeatedly caught off guard by the next flood.

Flooding is an example of a natural disaster where detailed information regarding the likelihood of the event is available and easily accessible, but personal experience is infrequent.  In most communities in the US, decades of historical flood records exist.  Government engineers have used the long record of past flooding, along with the location, slope, and elevation of the land surface to create flood maps (as shown in Figure 1) for each community.  The areas of highest flood risk are designated as part of the flood plain.  These parcel-level flood maps indicate the precise location of a house relative to the flood plain, and are given to homeowners when they purchase a new home. 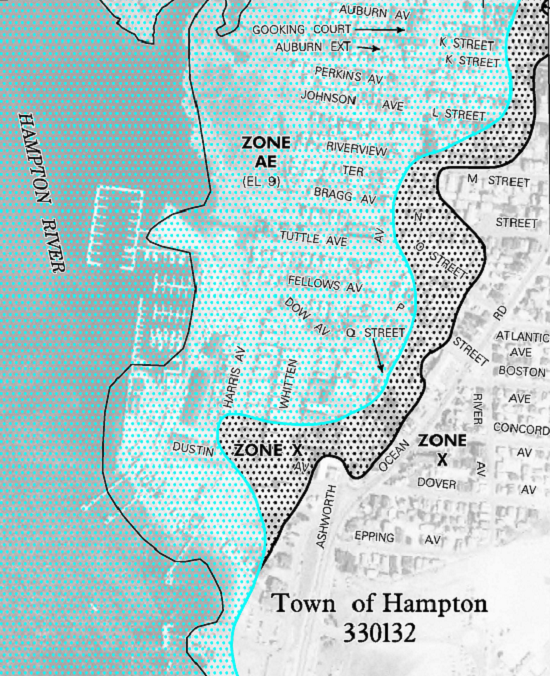 Figure 2 shows that many homeowners do not make a one-time decision of whether to purchase flood insurance based on the flood plain maps.  Figure 2 plots the percent change in the purchase of flood insurance policies per capita in a community relative to the timing of a large Presidential Disaster Declaration (PDD) flood in the same community.  The sample covers 1990-2007, includes data on all flood insurance policies in the US during this 18-year period (approximately 27 million annual policies), and considers 643 distinct PDD floods.  The x-axis plots the year of a flood.  The y-axis measures the change in flood insurance relative to the year before a food (event year -1).  The points in the figure are estimates from a statistical model that controls for calendar time trends and the fixed geography of each community. 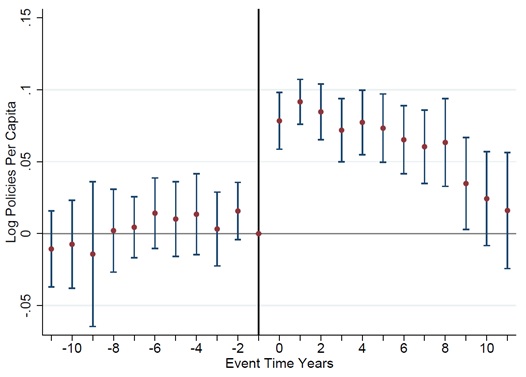 Notes:The figure plots per capita rates of flood insurance take-up in10,841 communities.  Time is normalized relative to the year of a flood.  The vertical line represents the year before a flood.  The dots plot the estimated percent change in insurance take-up relative to the year before a flood from a model that removes calendar year effects and community fixed effects. The bars around each point represent the 95% confidence interval and show whether each point is statistically different from zero. Data source: National Flood Insurance Program.

Immediately after a flood there is a spike in the number of new insurance policies.  Homeowners react to the flood by purchasing new insurance policies.  However, this reaction is temporary.  Nine years after a flood there is no longer any evidence that the past flood still influences the decision to purchase insurance.  Moreover, this pattern repeats itself regardless of whether it is the first or second flood in the community during this time period.

A risk learning model where homeowners use each new flood to reevaluate their beliefs about their flood risk can only explain the pattern of flood insurance purchases if homeowners “forget” about older floods.  A new flood provides very little new statistical information given the long history of past floods.  The immediate jump in insurance purchase combined with the quick decline to baseline levels suggests that homeowners are not incorporating all available information.  This could occur if current homeowners forget about past floods, or by migration if homeowners only use flood information from years spent living in the community.  (Unfortunately the data don’t allow a distinction between the two possibilities).  In both cases, the amount of flood information is limited and the relative importance of a new flood in forming flood beliefs is large.  In the years after a new flood, the effect of the recent flood on the expectations of a future flood will quickly lessen (implying a quick return to baseline) as residents begin to forget or because of the entry of new residents.

How homeowners learn about flood risks differs from how homeowners learn about some other environmental risks such as environmental cancer risk.  Lucas Davis examines how beliefs over environmental cancer risk change when the media reports an unusually large number of new cancer cases in the same communities.  A standard risk learning model (without “forgetting”) in which homeowners use the new cancer cases to update their previously held beliefs, can explain the observed change in property values in “cancer cluster” communities.  Property values fall as homeowners are less willing to assume the risk of living in a community where there is a potentially higher risk of getting cancer.

This article is based on the paper, ’Learning about an Infrequent Event: Evidence from Flood Insurance Take-Up in the United States’, in the American Economic Journal.

Justin Gallagher – Case Western Reserve University
Justin Gallagher is an Assistant Professor of Economics at Case Western Reserve University.  His primary research field is environmental economics, with a broad interest in applied microeconomics and the fields of labor economics, public economics, and behavioral economics.  Gallagher’s research has looked at the value of hazardous waste cleanup, the financial impact on households that experience a natural disaster, and how individuals update their beliefs about environmental risks.