In an ideal world, voters’ choices would be informed by their evaluations of the incumbent party’s performance on issues such as the economy. But given that research has shown that these evaluations are largely driven by voters’ political beliefs, how can elected officials be held accountable for poor economic management? In new research using survey data on changes in presidential approval and economic perceptions, Bradley T. Dickerson finds that when the economy is especially poor and slips into recession, economic attitudes can be a strong predictor of political attitudes.

Representative democracy is built on the notion that voters are able and willing to hold elected officials accountable for their performance in office.  From a normative (or ideal) perspective, voters should base their electoral choices on evaluations of the incumbent party or candidate’s performance.  For decades the notion of an “economic voter” has served as a central tool for understanding democratic accountability.  Yet a long line of political science research casts doubt on the ability of the American voter to process new information in ways that lead to updated political beliefs.  Instead, citizens tend to view the world in ways that preserve their prior political beliefs.  This tendency is perhaps most clearly seen in how voters perceive economic performance — individuals tend to view the economy more positively when they feel favorably towards the party of the President.  But how are elected officials to be held accountable for poor management of the economy if voters’ perceptions of economic performance are shaped by predisposed political beliefs?

Democrats and Republicans routinely disagree on how the economy is performing.  When a Republican sits in the White House, Republican voters celebrate the health of the economy while Democratic voters criticize the President’s management of the economy and mourn the nation’s impoverished state — and vice versa when a Democrat is President.  When the majority party in the House or Senate changes, voters also abruptly change their minds about the economy even despite little or no objective change in performance.  And individuals who approve of the President’s job performance view the economy significantly more favorably than those who disapprove of the President’s job performance. Even media outlets from opposite ends of the ideological spectrum interpret the same economic facts in dramatically different ways.  At the elite level, political leaders routinely attribute blame for economic crises to the opposing party with little or no regard for factual evidence of what causes a recession.

To better illustrate these partisan disagreements on how the economy is performing, Figure 1 plots the average economic perception of Democrats and Republicans from 1980 to 2012 (where higher values indicate more favorable views of the economy).  Immediately following each election year in which the party of the President changed (indicated by dashed vertical lines), the economic opinions of Democrats and Republicans crossed paths — Republicans view the economy more favorably when a Republican controls the White House, and Democrats view the economy more favorably when a Democrat controls the White House.  Clearly, political attitudes have a strong impact on economic attitudes.  These tendencies paint a poor image of the American electorate and cast doubt on the ideal of an economic voter.  But are Americans really so blind to economic reality that they are incapable of changing their political minds?  This seems unlikely — there must be some mechanism through which voters can at least occasionally update their political attitudes based on changes in economic performance.

A recent line of research has begun to focus on how the broader context shapes the motivation for partisans to view the economy in a biased manner.  Are perceptions of the economy more or less biased by partisanship during times of economic crisis?  Consider the Great Recession of 2008 — both Democratic and Republican voters were hard-pressed to say that the economy was performing well.  This suggests that perhaps voters become less biased in how they view the economy as the nation slips into recession. 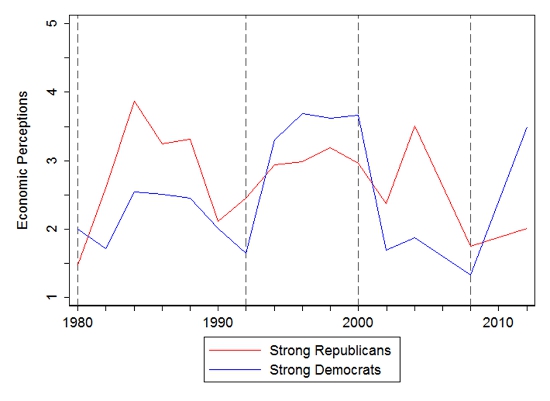 In recent research, I analyzed survey panel data from the American National Election Studies during time periods characterized by distinct economic trends to test how the causal relationship between presidential approval and economic perceptions might vary with the economic context.  Three survey waves conducted between 2008 and 2010 were compared to surveys conducted between 1990 and 1992, between 1992 and 1996, and between 2000 and 2004.  Of these four time periods, the Great Recession was undoubtedly the worst economic crisis.  Even the recession of the late 1980s and early 1990s, which drove the “it’s the economy, stupid” theme of the 1992 presidential election, was mild in comparison to the more recent financial crisis.  If the economic context does moderate the relationship between political and economic attitudes, then the 2008-2010 panel survey presents a valuable opportunity to test such an assumption. 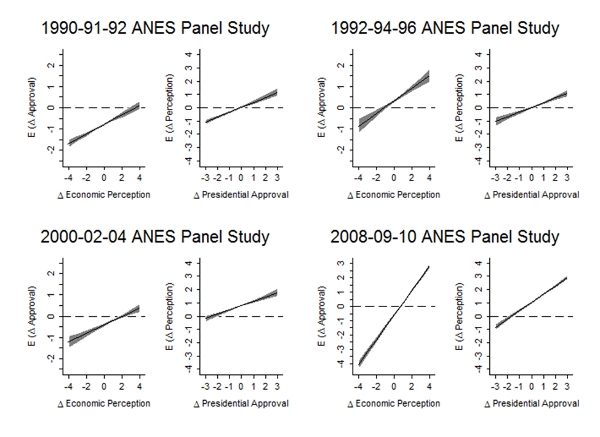 These findings demonstrate that there is still some hope for a democratic and responsible “economic voter” — when the economy slips into recession and push comes to shove, voters are still capable of updating their political attitudes and holding public officials accountable for economic performance.  For philosophical debates over the nature of opinion formation and the quality of representative democracy in the United States, these findings call for scholars to take a step back and consider the context in which their research takes place.

This article is based on the paper, ‘Economic Perceptions, Presidential Approval, and Causality: The Moderating Role of the Economic Context’, in American Politics Research.

Bradley T. Dickerson – University of Mississippi
Bradley T. Dickerson is currently a Ph.D. candidate at the University of Mississippi.  His research focuses on how contextual factors moderate the influence of political beliefs on opinion formation.  He also conducts research on the role of independent expenditures in congressional elections.  You can view more of his work at www.btdickerson.com.