Compared to private firms, government agencies are more likely to violate regulations and less likely to be punished.

Compared to private firms, government agencies are more likely to violate regulations and less likely to be punished.

Recent events such as the Volkswagen emissions scandal have reminded us that the private sector often break government regulations. But what about government agencies? In new research, that examines compliance with the Clean Air Act and Safe Drinking Water Act, David M. Konisky and Manuel P. Teodoro find that, facing higher compliance costs, government agencies are more likely than private firms to violate such regulations. They also argue that these agencies are less likely to be penalized by government for their infractions compared to private firms.

Decades of social science research have sought to explain government regulation of private, profit-maximizing firms, but many regulations also apply to government agencies. This fact is routinely ignored in theoretical treatments of regulation, and the sparse empirical work that exists is severely limited in scope. Consequently, what happens when government regulates government is poorly understood. Regulated government is particularly prevalent in the American environmental policy domain; a large number of government agencies—local, state, tribal, and federal—own and operate facilities that are subject to major federal environmental statutes, as Figure 1 below shows. These statutes include the Clean Air Act (CAA), the Clean Water Act, the Safe Drinking Water Act (SDWA), the Resource Conservation and Recovery Act, and the Superfund program. 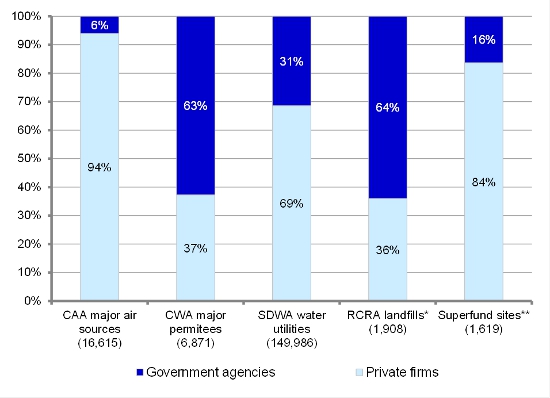 In new research, we build on previous work to develop a new political theory of regulation that posits that government agencies are both more likely than similar private firms to violate regulations and less likely to be punished for their noncompliance. We argue that agencies face higher costs of compliance because they must secure resources through political processes, while private firm may more easily pass these costs on to consumers or secure them through a legalistic regulatory process. In addition, we posit that agencies are less likely to be penalized for violations, in part because they are more likely than firms to prevail in their judicial and legislative appeals against regulators. In terms of enforcement, we argue that regulators are less likely to penalize public agencies in part because they may rely upon them for critical services or identify with the managers of regulated agencies as fellow public servants, and because any such penalties are more likely to be overturned through an appeal from the regulated agency.

We empirically test these predictions through statistical analysis of compliance with and enforcement of the CAA and the SDWA. These federal laws provide excellent empirical traction because many of the public agencies and private firms they regulate provide substantively similar services and therefore are directly comparable. Analyzing power plants and hospitals regulated by the CAA and water utilities regulated by the SDWA, we find evidence consistent with our theoretical expectations: government facilities are more likely than similar private firms to violate the regulatory requirements of the CAA and SDWA. Moreover, government regulators are less likely to impose punitive sanctions for noncompliance on public agencies than on private firms. Specifically, we find:

Government agencies are among the largest sources of air and water pollution, generators and managers of hazardous and radioactive waste, and consumers of energy. Governments are regulated in vast numbers under various pollution control programs. At such scales, the consequences of government regulating government are not merely academic: effective regulation of government agencies has real and important policy consequences. If public agencies are more likely to violate environmental laws, as is the case for facilities regulated by the CAA and SDWA, then the well-documented health and ecological impacts of pollution problems are in some measure attributable to government sources. Effectively addressing these problems may require significant policy and/or management reforms. For example, reforms might include capacity-building subsidies to help public agencies investment in better infrastructure and technical expertise. Reforms might also include compliance assistance to help willing agencies improve their performance or more aggressive enforcement for those less inclined. And, of course, reforms might include the privatization of government enterprises, though privatization must be balanced with other costs and benefits of public versus private management.

The theory that we develop in our research deepens our understanding of regulatory compliance and enforcement, thereby advancing literatures in political science, economics, and public management. Moreover, due to the ubiquity of regulated government in environmental policy, the project makes an important contribution to the environmental politics literature. More generally, we paper provide an analytical framework that we think is broadly applicable to other instances of government regulating government in areas such as privacy, health, labor, and workplace discrimination.

This article is based on the paper, ‘When Governments Regulate Governments’, in the American Journal of Political Science.

Manuel P. Teodoro – Texas A&M University
Manny Teodoro is an Associate Professor in the College of Liberal Arts at the Department of Political Science at Texas A&M University. His scholarship stands at the nexus of politics, public policy, and public management, with emphases on American local government and environmental policy. His public administration research emphasizes executive behavior, with special attention to bureaucratic career systems as political phenomena.